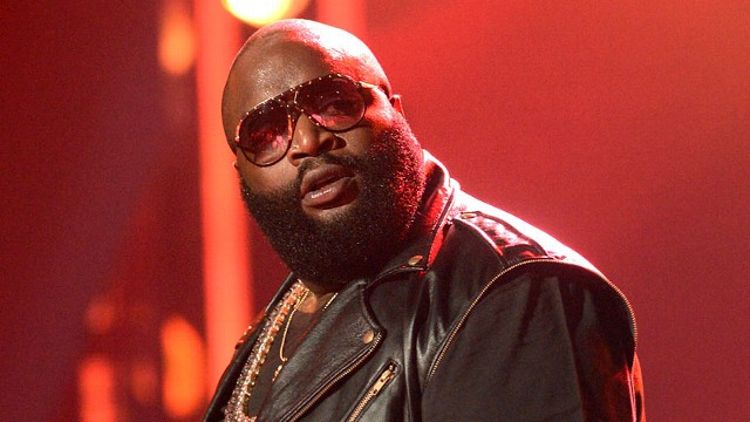 I have a beard, I own both What’s Going On and Thriller on vinyl, my collection of rap magazines with Rick Ross on the cover is impressive, and on overcast days I’m usually posted up inside the crib, making cat videos. This clip settles it: I am only a skull-candle (and several bazillion dollars’ worth of jewelry) away from being Rick Ross.

Here is some important footage of Future and Ciara — duet partners, wearers of his-and-hers leather pants, titans of popular song, and now-rumored power-couple — being swarmed by photographers and admirers during a visit to Saks Fifth Avenue in Houston during All-Star Weekend. Shout out to the girl who yells “We don’t wanna neva end!” as the escalator carries them up (where they belong) and away from the ordinary people. Confronted with the reality of a love that yields slow jams like this synth-moist interpolation of Ghost Town DJs’ winsome, indelible bass-Jeep love ballad “My Boo,” we are all that girl.

Nice oncoming-freight-train horn around 3:00; needs way more “My Boo,” though.

Thurston Moore’s first album with his new post–Sonic Youth band, Chelsea Light Moving — who I kinda want to refer to from now on by the CCR-like abbreviation “CLM,” if nobody’s doing that already — invokes a host of countercultural statesmen even elder-er than Moore himself, including William Burroughs and Frank O’Hara. “Empires of Time” is supposedly about 13th Floor Elevators founder and acid-rock godhead Roky Erickson, and on record, it’s merely a high-quality stop-start riff-flex positing CLM (it sounds cool, right?) as “the third eye of rock and roll.” It wasn’t until I heard this live version that I realized it’s also Moore sort of awesomely and heartbreakingly rewriting “Pacific Coast Highway” around the absence of Kim Gordon.

For a rapper who’s already saluted Paul Orndorff, cedar-plank salmon, Jon Caramanica, and “laying back eatin’ poutine” in rhyme, there’s arguably no such thing as an out-of-nowhere reference anymore — but I wouldn’t have pegged Bronsolino (rhymes with “Branzino”) as the first MC to drop a product placement for the Benz of bodyboards. From Morey Boogie founder Tom Morey’s possibly-self-penned Wikipedia page: “Morey attributes inspiration for invention of the Boogie board (July 7, 1971) to a particular Baha’i prayer he kept coming across which included the passage ‘Convey upon me, oh, my God, a thought which will turn this planet into a rose garden.'” Not dissimilar, really, to Bronson’s hook here: “I gotta get that dough/I want the Beemer with the racer seats/Pound the ground with my feet to make the pavement speak.” Produced, in characteristic swirly psych-rock fashion, by Harry Fraud, whose Adrift mixtape (which drops today at 4:20 p.m., because of course it does) will have this song on it.

“When I awoke I believed I had taken a bride called Mary Stanford,” Cave’s narrator tells us. “I flew into a frenzy, searching high and low, because in my dream the girl was very young.” He’s speaking, not singing, and the shudder in his voice implies a lot — it says Of course you understand that I was horrified — I, a decent man, just like any of you. We never find out what exactly he did in the dream, or afterward, but there’s something horrible under the floorboards of this song, a tremendous Gothic guilt — it’s in the way he says “All of this in her dark hair, O Lord/All of this in her dark hair,” as if even God might turn His back. Behind all this, the Bad Seeds play in a stage whisper; the music’s something like Slint’s “Good Morning Captain” stripped of all catharsis. On Push the Sky Away, Cave’s 15th record with the Bad Seeds, this is the best/creepiest song, edging out the one about Hannah Montana by the narrowest of margins.

Daft Punk have managed to be one of the most important bands of the last five years, despite not having released an album in the last seven, so it’s probably no surprise that when they released 15 seconds of new music during Saturday Night Live last weekend, people just about lost their minds; we have those people’s enthusiasm to thank for things like this basically infinite loop of the SNL snippet. Recommended if you’ve ever considered the possibility that heaven is a remix of Sister Sledge’s “Pretty Baby” that never ends. Or starts.

So, hey: If we’re going to continue interrogating “hipster R&B” dudes about whether they consider themselves “hipster R&B,” can we maybe also set up a Kickstarter to fund media training for said dudes, so that an interview like this one — in which transparent-shirt-favoring bass-dweebs Inc. are asked about their influences and end up stammering regrettable phrases like “white struggle” and “white energy” — never happens again? OK, awesome. Moving on: The L.A.-via-Copenhagen duo Rhye’s first album, Woman, came out this week. It’s a little bit hipster-R&B-ish, but more than anything it’s a yacht-rock record that drops anchor in calm moonlit waters somewhere between Sade and Boz Scaggs, circa “Harbor Lights.” These should not be exciting reference points, and yet they totally are; this is deeply emotional music performed with an almost religious degree of restraint.

Wrote off Drake’s most recent pre-album throat-clearer “Started From the Bottom” as peevish and thin-sounding. Then I couldn’t get it out of my head. Plus it was fun to throw the title into conversations at extremely un-ballerish moments: It’s 10 p.m. on a Friday, we’re playing Cards Against Humanity and drinking Carlsberg in somebody’s breakfast nook. Started from the bottom, now we’re here! On “5 AM in Toronto,” Drake addresses his haters. Finally! It’s three minutes of clever, hookless scorn seemingly aimed at Chris Brown, the Weeknd, and the compilers of this linkbait-y Hottest MCs in the Game video-listicle; it strikes me as thin and peevish right this second, but I’m giving it time. (Just to be clear, though, nobody’s reply to that MTV list beats “They don’t like Kanye in a kilt.” Nobody’s.)

This is three years old, but it only has 600-something views, which is not nearly enough. Lawrence’s interests include playing guitar and soldering; he has a hardback of Thomas Pynchon’s Inherent Vice, a ganglion cyst that needs to be hit with a heavy object, and a copy of Fucked Up’s “Son the Father” cued up to just the right moment. Most of my heroes don’t appear on no stamps.

She & Him, “Never Wanted Your Love”