Songs of the Week: Morrissey’s in Istanbul, Sam Smith’s in a Love Triangle, and Ab-Soul’s Got a Slight Case of Stigmata 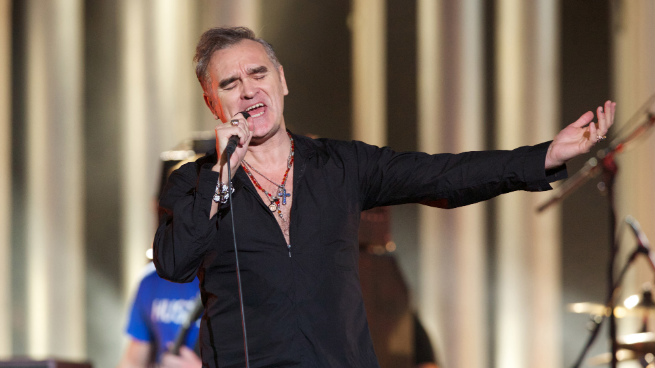 Morrissey’s upcoming new album, out July 15, has already given us an embarrassment of song-title riches: From the title track “World Peace Is None of Your Business” to the alluringly enigmatic “Staircase at the University” to the more straightforwardly effective “Neal Cassady Drops Dead” or “Kick the Bride Down the Aisle,” clearly our man Moz has not lost a mile off that fastball. By comparison, new single “Istanbul” may seem more prosaic, but trust that what it lacks in titular acrobatics, it makes up for in a nice big batch of ineffable sadness.

The Graceless Age, well-traveled Oakland-via-Mississippi singer-songwriter John Murry’s proper 2012 debut, was a gem unfairly slept on. But there’s good news! First, this new number, which comes off his new EP, Califorlornia, and which Murry describes thusly: “An Eastern vocal melody painted over a very Western rock and roll song structure … What could be more California than this?!?” And second: The Graceless Age is being re-released, with bonus tracks, by Evangeline Records, on June 17. This time, let’s all pay attention?

First Kendrick, then Q: Now, it appears, it’s Ab-Soul’s turn to take a run out the TDE barracks. The trippiest member of the crew, and proudly so, Ab’s teasing a new release called These Days with new joint “Stigmata,” which nabs the mouthy hook from Nas’s “The Cross” on its way to a swirly kind of hand-bloodied party-nihilism. Shout-out to Action Bronson, also, for this alone: “From the fiery pits / on some Dead Poets Society shit.”

Destiny’s Child Michelle Williams went gospel a while back, and now she’s got the band back together to praise Jesus with her. Having Beyoncé sing the word of God? This is going to be the most aggressively effective stratagem unleashed by the good church since Pope Urban II proclaimed the first Crusades!

Ascendant Internet balladeer Alex G (currently an undergrad at Temple University) now has an official debut, DSU, with an official release date (June 17), and an official new single, “Harvey.” Listen to it like 17 times in a row, then go ahead and make sure to tell all your friends you were into Alex G first.

Like it or not, Australia’s “boy-band with guitars” outfit 5 Seconds of Summer — excuse me, excuse me: 5SOS — is what the kids are into, or what they’ll be into imminently. And so, a suggestion: As their ubiquity is guaranteed, do not fear the slick hooks and carefully-assembled-as-to-suggest-scrappiness ensembles, but rather embrace 5SOS and learn to have love for them in your heart; this is the path to peace.

JUNGLE, a U.K. dance act led by the quasi-mysterious J and T, are now doing their thing on the beloved XL Recordings, which is good news: Primo strutting-down-the-street music like this needs a proper showcase.

Recently, Norway’s Röyksopp and Sweden’s Robyn met somewhere in the middle (perhaps a border town? Arvika? Torsby? Kongsvinger??) for a one-off collaborative EP, Do It Again; now, that thing’s streaming at NPR. It’s a great tale of Scandinavian unity and everything, except for one thing: Once again, no one remembered to invite poor ol’ Finland.

Video on Demand Report: Spend Your Long Weekend With George Clooney and a Bunch of Old Art

The Right Reasons Podcast: 'Survivor' and 'The Bachelorette'