Video on Demand Report: Spend Your Long Weekend With George Clooney and a Bunch of Old Art 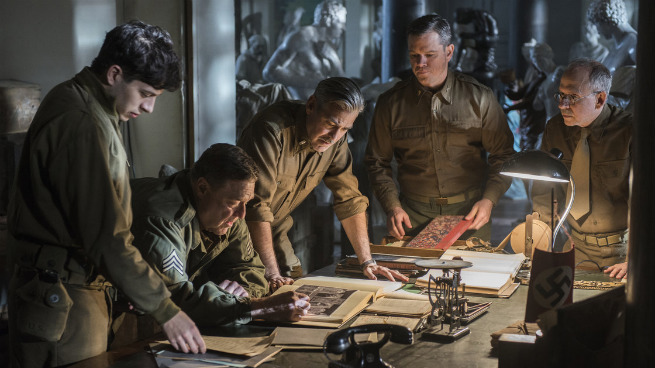 During World War II, the Allied forces had troops with all kinds of different specialized skills — most of which had to do with, you know, fighting the Axis powers. This film tells the story of the guys who worked to protect the priceless works of art in the war zone.

George Clooney directed, co-wrote, and stars in The Monuments Men as Lieutenant Frank Stokes, who convinces the president to let him put together a crew of experts whose job it would be to direct Allied soldiers away from the art, and to recover art stolen by the Nazis. Joining Frank are art historians, museum directors, and art curators from multiple nations: The cast includes Matt Damon, Bill Murray, Jean Dujardin, John Goodman, and Hugh Bonneville. Also present is Cate Blanchett, a curator in occupied Paris, who is approached by Damon’s Lieutenant Granger about working with his unit but resists, suspecting that they might be looters like the Nazis, with whom she’s already had a run-in.

All of the titular Monuments Men are based on real soldiers who performed this function during the second World War and heroically helped save huge swaths of Western culture. So if you find it a little boring, you might also end up feeling really guilty about it.

Wesley Morris: “[Clooney]’s directed five films. This one is the spiritual twin of his 2008 football screwball Leatherheads — both strive to embody bygone entertainment, just not artisanally. These aren’t vintage re-creations, the way you’d get with a younger director who just discovered, say, The Dirty Dozen. They’re not the explosive revisions of Quentin Tarantino, either. With Clooney, these throwbacks aren’t out to unpack antique craftsmanship or correct long-standing thematic problems. With him, it’s The Dirty Dozen with even less dirt.”

Please don’t confuse 3 Days to Kill with the other Kevin Costner CIA drama that came out in January 2014. That was Jack Ryan, the Tom Clancy reboot. This is something else.

Costner plays Ethan Renner, a CIA agent working on capturing a henchman working for The Wolf, a notorious arms trafficker. Little does he know this case might turn out to be his very last …

Wesley Morris: “[Costner] might be the only star left in Hollywood who could take a role with this much ludicrous in it and perform the whole thing as though he were simply taking a bath. Neeson would need something true to play. Costner just plays himself.”

You may think you know the story of Vesuvius. But are you ready for it to be interpreted by Paul W. S. Anderson, the director behind Resident Evil and the late-aughts Death Race reboot?

Kit Harington (Game of Thrones bastard — what? He is! — Jon Snow) is at the center of the action as Milo, a slave turned gladiator. He’s got his own whole situation with that transition, but I have a feeling none of it will matter much in the fullness of time.

Wesley Morris: “Tellingly, the movie isn’t called Vesuvius. ‘Pompeii’ sounds like a place where soapy, sexy stuff happens all the time — like ‘Dallas’ or ‘Studio 54.’ To that end, [Emily] Browning often looks like a woman on the brink of an orgasm. It’s as if she’s trying to out-act the volcano.”

If you can’t wait for the next installment of the Think Like a Man franchise, this rom-com starring both Michael Ealy and Kevin Hart should nicely fill the gap.

Based on David Mamet’s Sexual Perversity in Chicago (and borrowing the title from its first film adaptation back in the mid-’80s), About Last Night revolves around two new couples dealing with the issues that arise when the initial excitement of a relationship is tested by day-to-day conditions.

Wesley Morris: “Ride Along has made him a box office star, but About Last Night makes a case for Hart as the kind of romantic comedian who’ll stop humping your leg long enough to ask how your day was.”

Congratulations to Enemy for discovering the only thing better for a movie than one Jake Gyllenhaal: two Jakes Gyllenhaal.

In Enemy, in which the actor works with his Prisoners director Denis Villeneuve, Gyllenhaal starts the film as Daniel, a guy attending a weird sex show. The next thing we see is Adam, a college professor who looks just like him, spotting Daniel acting in a film. Soon, Adam is obsessed with Daniel, and the obsession starts to tear his life apart.

Wesley Morris: “The movie’s based on a José Saramago book, and Villeneuve gives it just enough airless surrealism to be both outlandish and creepy.”

Has the vampire craze run its course? The $15 million box office gross for this $30 million movie would suggest that maybe it has.

St. Vladimir’s Academy is an elite boarding school for peace-loving mortal vampires (Moroi) and their half-human/half-vampire bodyguards, and, of course, it is located in Montana. Dhampir Rose and Moroi Lissa return to the school after two years’ absence and have an uneasy time reintegrating with the institution and its secrets and strange practices.

As we all know, there’s only one movie plotline hotter than forbidden love: forbidden love in repressed olden times! No one can rip their clothes off when there are such complicated undergarments to deal with!

In Secret, based on Émile Zola’s novel Thérèse Raquin, stars Elizabeth Olsen as Thérèse, a young woman pressured into marrying Camille (Tom Felton), her sickly cousin. Unsurprisingly, this marriage is not happy, but things only get worse — or … better, depending on your perspective — when she meets the sexy Laurent (Oscar Isaac).

Even those who don’t particularly support gun ownership can’t really get that exercised when a homeowner shoots someone who has broken into his house in the dead of night with undoubtedly nefarious intent. When such an event happens in Texas, and the intruder has a long criminal record — both of which are the case in Cold In July — the shooter might actually be regarded as a hero to just about everyone in his community … other than the intruder’s father.

Available to rent the same day it hits theaters, Cold in July stars Dexter‘s Michael C. Hall as the shooter; Sam Shepard plays the dead guy’s father, who’s had kind of a checkered past himself and has recently been paroled, so has lots of time to mess with his son’s killer.

Different people respond to the loss of a parent in different ways. Some fall into serious depression; some make it a priority to spend as much time as possible with family while they still can. The Big Ask‘s Andrew has another idea entirely.

In The Big Ask, which you can rent the same day as its theatrical release, David Krumholtz plays Andrew, who has recently suffered the loss of his mother. After getting his dearest friends out for a week’s vacation in the desert in California, he announces that he’s thought of a way they can help him get through this hard time in his life: All three of his female friends (played by Gillian Jacobs, Melanie Lynskey, and Ahna O’Reilly) could agree to have group sex with him. Normal stuff.

Songs of the Week: Morrissey’s in Istanbul, Sam Smith’s in a Love Triangle, and Ab-Soul’s Got a Slight Case of Stigmata