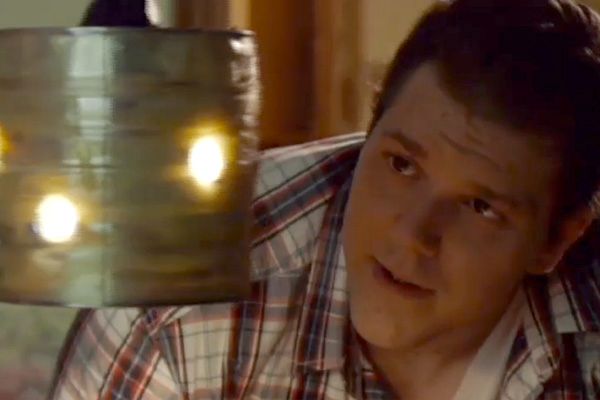 Who Is This Now? Andy and Amber.

Why Are We Watching Them? Their new home in the woods is presenting them with some problems.

How Did They Get Here? Andy lost his job and needed to move his family to a less expensive rental house. Perhaps the reason it’s so cheap is that it’s infested with stinkbugs?

What’s the Grossest Thing We See? Andy’s brother comes over for dinner and unwittingly eats a bite of spaghetti with a stinkbug on it. That what we see is actually just a reenactment doesn’t make it any less upsetting.

What Have We Learned? Exterminators are powerless against stinkbugs: When Andy and Amber make room in their limited budget to pay for one, they actually see the stinkbugs fly out of the house … and then hang out in nearby trees waiting for a chance to reinvade the house. But, challenged by his circumstances, Andy devises his own anti-stinkbug trap, which works so well that he started producing them commercially — so, unimaginably, something good actually came out of this disgusting affair.

Why Are We Watching Him? Near his home on the east coast of Florida, he’s building a castle.

How Did He Get Here? Brent’s preparing for an electromagnetic pulse attack by “going medieval” on the apocalypse; the castle is to be his family’s stronghold.

What’s the Grossest Thing We See? Brent plans to leave all his money in an unbreakable “last retreat family trust” that is designed to last his descendants — Brent’s two marriages have resulted in 10 kids, ranging in age from 8 to 41 — for 100 years. Brent’s plan is to leave the trust under the control of two of his children (one from each marriage), and he’s using this time with the Preppers cameras to put some of his children through a series of tests to determine which of them should have control of the trust. While Brent’s intention is to challenge his kids to show their practical skills — who can successfully build a solar panel array; who is good with guns — his daughter Ashley immediately rivals Regan or Goneril in her eagerness to get control of the trust by kissing Brent’s ass: “Amazing, that’s awesome. And this is the best gift — better than any Christmas present, better than anything I could get, this right here.”

What Have We Learned? Brent is not the world’s greatest dad.

Who Is This Now? Lexi.

Why Are We Watching Her? Just 14, she’s already acting out so badly that her mother doesn’t know what to do and has called in expert help.

How Did She Get Here? When she was 9, Lexi’s father read her a story before bed and then fell asleep next to her. She woke up to find her father unconscious, and though she tried performing CPR on him for 45 minutes, he died. Since then, Lexi has started using a variety of drugs, and she left home partying for several days when she was 13, coming home only when she saw herself on “Missing” posters.

What’s the Grossest Thing We See? “Teen behavior expert” Josh Shipp, in an effort to get Lexi to stop glamorizing death, sends her to visit a funeral home, where the mortician tells her what are probably confidential details about the deaths of several teenagers on the premises. He also has her get a sense of what death might be like by telling her to get into a coffin.

What Have We Learned? If “teen behavior expert” Josh Shipp has any actual professional training or credentials, neither he nor Lifetime has chosen to make those public. I’m just saying, it’s the kind of thing one might wonder about when you see one of his surrogates put a 14-year-old in a coffin.

Tara Ariano was the kind of boring, obedient teenager parents today must dream of.