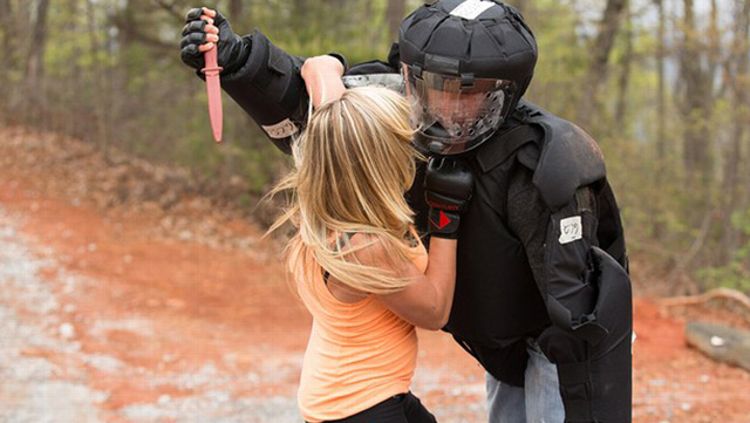 Why Are We Watching Him? He’s teaching his adult children survival skills that will help them to man the castle he’s building to ride out the apocalypse.

How Did He Get Here? He’s afraid of economic collapse. And just afraid in general.

What’s the Grossest Thing We See? This week, “Brent” (the show’s producers) is (are) putting the kids through Krav Maga training so that they’ll be able to neutralize any looters or marauders that might make it onto Brent’s property when the apocalypse comes. After everyone’s had a chance to learn some techniques with Chris, the Krav Maga trainer, they get paired up to fight each other with the rest of their family members for an audience. Even though Brent has just finished getting his ass handed to him by his son Michael and Michael’s berserker rage, Brent has no problem watching serenely while his daughters Dawn-Marie and Ashley — who’ve spent the week scrapping with each other and who “happen” to get paired up for this exhibition — basically abandon all their Krav Maga skills and just try to rip each other limb from limb. Ultimately, Chris is the one who breaks up the fight, which I guess Brent is totally fine with.

What Have We Learned? Brent continues to be one of TV’s worst dads.

Who Is This Now? Makeba.

Why Are We Watching Her? She’s on the receiving end of a revenge scheme conceived by her daughter, Tamar.

How Did She Get Here? Throughout Tamar’s life, Makeba has been insulting and hurtful about Tamar’s weight. Now Tamar has spent three months losing weight and intends to unveil her new body along with a lesson.

What’s the Grossest Thing We See? The pretext for Makeba to be on the receiving end of Tamar’s revenge plan is a play Tamar wrote about her upbringing with Makeba, so Makeba has supposedly been invited to a rehearsal in order to give notes to Virginia, the actor playing Makeba. Not only does Makeba react with delight as Virginia portrays Makeba screaming insults, like “tire belly,” at her daughter; she also suggests that Virginia throw “tub of lard” into her monologue as well. When Tamar comes out and explains the situation, Makeba texts while Tamar cries; expresses total ignorance of what she’s supposed to be sorry for; and finally acquiesces by shrugging and spitting “Sorry” at Tamar.

What Have We Learned? I’m pretty sure no one learned anything from all this baloney, other than that Makeba was and still is a terrible mother.

Who Is This Now? Alex.

Why Are We Watching Him? He’s showing us how he’s preparing to survive World War III.

How Did He Get Here? He has no faith in human nature and believes that strife in the Middle East is going to erupt into international war and chaos.

What’s the Grossest Thing We See? Alex has decided that his best hope for survival lies in training German shepherds as guard dogs and hunters. If this kind of perversion of dogs’ obedience and loyalty offends your sensibility … just wait, there’s more. Alex has also removed his dogs’ natural canine teeth (er, all dogs’ teeth are canine — I mean the pointy teeth in the corners of their bites) and replaced them with titanium implants.

What Have We Learned? The local ASPCA should try to find Alex’s compound and move his dog army to homes with owners who will, I don’t know, just love them and not try to turn them into killing machines?

Who Is This Now? Ariane.

Why Are We Watching Her? She’s behaving poorly in the run-up to her wedding.

How Did She Get Here? She’s a jerk.

What’s the Grossest Thing We See? Ariane wants to bring her fiancé, Jorge, on a trip to a sex shop to buy supplies for their honeymoon: fine. She also brings along a female cousin-in-law, who might not want to be present as Ariane presses cock rings on Jorge and he keeps anxiously repeating that he’s “open” to whatever she wants. In the middle of their browsing, Ariane announces that she’s hungry, chooses a pair of edible underwear from a display, and starts eating them in the middle of the store.

What Have We Learned? Jorge may regret having signed these releases.