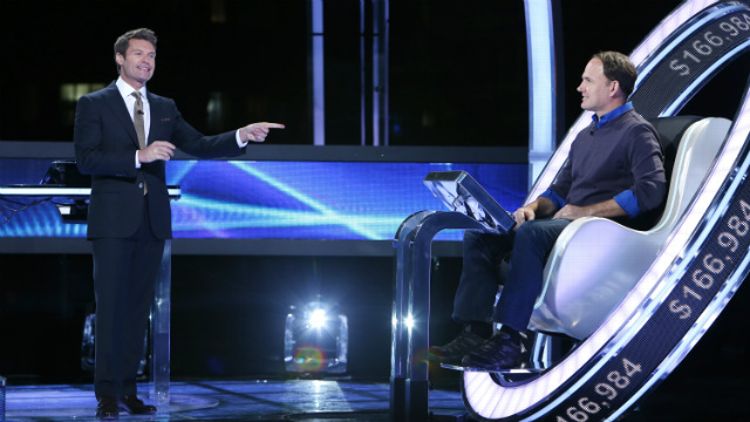 On Monday night, NBC — at publication time still a broadcast television network, but the situation always remains fluid — debuted The Million Second Quiz, the latest desperate attempt to chase the elusive culture-unifying dragon that was Who Wants to Be a Millionaire. Hosted by emcee/mogul Ryan Seacrest, the closest remaining thing the post-apocalyptic media landscape of Bowling Alonemerica has to a universally recognizable television presence, in-studio contestants compete against one other, people on the Internet, and, we think, the very concepts of time and money themselves, for the Largest Prize in Game Show History.

This is our attempt to explain the show to you.

The show has a lot going on.

We may fail in this mission. To be honest, maybe we weren’t paying close enough attention.

What are the contestants trying to win?

Money. They are trying to win money. A lot of money. This is a game show. Game shows are usually about money. Unless they’re on in the daytime, and then they are about major appliances or grocery store shopping sprees. Daytime TV budgets are kind of tight.

How much money are the contestants trying to win?

Pay attention — we just told you up top, it’s the Largest Prize in Game Show History, but we’re too lazy to bother verifying that fact. It sounds correct?

They are probably counting on our laziness here. Well played, Ryan Seacrest. You have built a formidable empire on the sloth of your viewers. Buy yourself something nice, maybe from the Dash outlet store in your beach house.

Aren’t we going to constantly call it Million Dollar Quiz by mistake?

They probably should have called it something else, because yes, nine times out of 10 you are going to mistakenly refer to it as Million Dollar Quiz.

How many seconds does the show last?

The show will last for 1 million seconds, or [converts into more practical time units] 38 years. Wait. [Re-converts time units.] 10 days? They say it’s going to go on for 10 consecutive days. It’ll be on TV every night for the duration of the million seconds, or until the Earth crashes into the sun, whichever is shorter.

We can’t guarantee the Earth will not crash into the sun before the million seconds are up. You just have to go on living life like you’ll get to see the end of the show before the extinction of humanity. Hug your children. But maybe watch Million Second Quiz through a bent wire hanger, just in case.

Now explain how the show works, maybe? The short version.

The show takes place inside The Hourglass, an hourglass-shaped structure atop a skyscraper in Manhattan. Inside the Hourglass is the Money Chair, where contestants sit to accumulate money by correctly answering more trivia questions in the Quiz Bout than the person standing across from them at the I Would Like to Sit in the Money Chair Next Please Podium, or by merely remaining in the Money Chair and adding to their theoretical cash-hoard at the rate of $10 per second. Once a contestant in the Money Chair (shouldn’t they have called the show Money Chair? Wait, Money Throne! Thrones are so hot right now — how did they miss that?) loses a trivia battle to the person standing at the IWLTSITMCNP Podium, he or she proceeds to Winners’ Row, IF AND ONLY IF he or she has amassed one of the top four money totals in the game to that point.

At the end of the million seconds, these top four earners from Winners’ Row will face off against one another for the top prize. The winner of that final face-off will then fight Tina Turner to the death inside an improvised Money Dome for all the cash in the world. This will be the basis of a subsequent game show called Thousand Second Fight that you will mistakenly refer to as MoneyDome.

Wait, so what’s Winners’ Row now? There’s probably more to it than that.

Winners’ Row is an ultra-exclusive, Hourglass-adjacent community made up of only the current top four earners of the show. The contestants literally live on Winners’ Row until they are displaced by higher-earning challengers. More specifically, the contestants live inside individual Money Pods, which are a thrilling combination of Container Store personal-habitat solution, Japanese love-hotel coitus-chamber, and MoMA exhibit on the dehumanization of greed. They’re pretty nice, all things considered; you really couldn’t ask for a better Orwellian prison cell from which to be observed by a prime-time television audience and the family you’ve left behind to live on top of a skyscraper with Ryan Seacrest.

The Money Pods are sponsored by Subway, just as the prophecy foretold. Where do the denizens of Winners’ Row — um, how do I ask this delicately — do their dirty business?

The plumbing amenities of the Money Pods were not disclosed during last night’s broadcast. We imagine that there are hourglass-shaped mobile toilet solutions somewhere on the set.

What happens when a contestant is displaced from Winners’ Row?

The contestants are launched off the skyscraper from a catapult mounted atop the Hourglass. None survive the impact. It is a very tall skyscraper.

What is a Line Jumper?

Oh! This is good! OK, so there’s a play-at-home app, which in our (admittedly limited) experience was impossible to activate. But if one were able to activate the app, play along at home, and then accumulate a sufficient number of Play-At-Home Points, one would become eligible for a Home Visitation by the Million Second Quiz Talent Acquisition Team. If one is selected by the MSQ-TAT, a television crew documents his or her Life-Changing Selection — pack your bags, you’re headed for a white box atop a skyscraper! — and the new Line Jumper is immediately brought to the Hourglass, placed in front of the I Would Like to Sit in the Money Chair Next Please Podium, and given an opportunity to displace the Current Occupant of the Money Chair via the trivia game. This is what a Line Jumper is.

Is Blake Shelton involved in any way?

During the trivia game, can you Double Your Points?

This may not be how this works at all. Every time they explained this crucial strategic feature, our minds wandered to questions about life in the Money Pods: Are the beds comfortable? Do they get to eat an unlimited amount of delicious Subway sandwiches, with the avocado upgrade fee waived? Hope we’re right about the hourglass-shaped porta-potties — otherwise things are going to get pretty unpleasant up there?

Hold up, someone just became a Power Player. Explain, please.

This may not be how this works at all. When they explained this crucial strategic feature, we were busy designing an ecologically conscious and ergonomically pleasing human-waste disposal system for the Money Pods, because, honestly, this situation with the hourglass-shaped porta-toilet thing is not working out for anybody. We can and will do better. You can’t have contestants roaming the top of the skyscraper in the middle of the night, looking for the shitter, and Seacrest doesn’t want to get woken up every five minutes to give them the bathroom key. Guys, this isn’t cool. Hook up some Dirt Devils to a funnel and get them in the pods — he doesn’t care, he needs his beauty sleep. He will fuck you up if he finds a single crow’s foot in the morning, he’s not kidding.

Is this all really complicated? I remember the days when you just answered some question with Regis and he just gave you money. Like, Regis just reached into his pocket and peeled off your winnings. Maybe you phoned a friend to talk about it. Simple. This seems not easy.

Thank you, I thought it was just me.

It’s not just you.

We give up. Let Seacrest explain it, we don’t care.