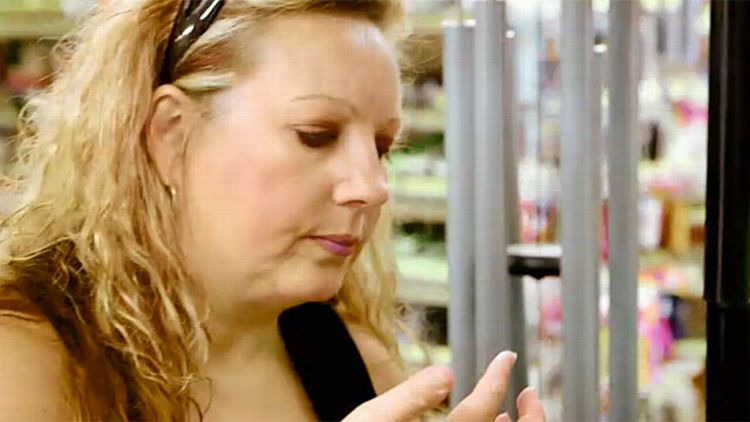 Who Is This Now? Heather.

Why Are We Watching Her? She’s addicted to drinking paint.

How Did She Get Here? Shortly after her mother died, Heather was cleaning out a desk and found a paint pen. She was attracted to the smell and suddenly had the urge to taste it. Since then, she has consumed the contents of a paint marker every day, for an estimated total of three gallons of paint since she started.

What’s the Grossest Thing We See? It’s not great watching her show us how she drinks paint in private, and some of it spills down her chin and dries almost immediately before she can wipe it away. It’s worse when she goes to a hardware store to restock and tastes it in front of the clerk.

What Have We Learned? Medical testing reveals that Heather has abnormal kidney function, probably as a consequence of her body’s inability to digest paint. So don’t drink paint. (This is apparently all the wake-up call Heather needs: She stops drinking paint and her kidneys return to normal.)

Who Is This Now? Jennifer.

Why Are We Watching Her? She’s addicted to eating foam mattress filler.

How Did She Get Here? Jennifer’s addiction began when she was 5 and ate the filling in the seat of the family car.

What’s the Grossest Thing We See? When Jennifer passes the foam she eats, it comes out whole and either backs up or stops up the toilet; she tells us that she considered scooping it out of the toilet, “washing it,” and eating it again, but didn’t. Later, she tells a gastroenterologist that one of the side effects she’s experienced from eating foam are “sulfur burps,” “like a fart in my mouth.”

What Have We Learned? The reason for her foul burps may be that she’s not properly digesting the actual food she eats because she has an intestinal blockage from the foam, and the food is fermenting in her GI tract. So … don’t eat mattresses.

Who Is This Now? Amy and Becky.

Why Are We Watching Them? They’re identical twins who are addicted to being identical.

How Did They Get Here? At some point, Amy gained enough weight to be distinguishable from Becky, so that one was the big twin and one was the small one. That was distressing enough that Amy not only lost the weight, but they determined to be identical in every way: They dress alike, sleep in the same room, eat and drink all the same things, and haven’t spent more than half an hour apart in more than two decades.

What’s the Grossest Thing We See? One of their friends sets Becky up on a blind date with a guy named Phillip. Becky shows up with Amy, which wasn’t part of the plan, but he’s extremely nice about it. The only thing that seems to give him pause is when, in order to make sure that they’re both eating exactly the same amount, they pull out a food scale and weigh their steak at the table. Although things don’t work out with Becky and Phillip, the twins aren’t that worried about it, since they’re already each other’s soul mates: “We’re kind of married to each other.”

What Have We Learned? Spending 24 hours apart for the sake of the show apparently only intensified Amy and Becky’s addiction to being identical and spending all their time together, so maybe we’ve learned that they really are soul mates.

Filed Under: My Strange Addiction, TLC

See all My Strange Addiction

The Wolf of Wall Street: The Little Controversy That Could (and Should)