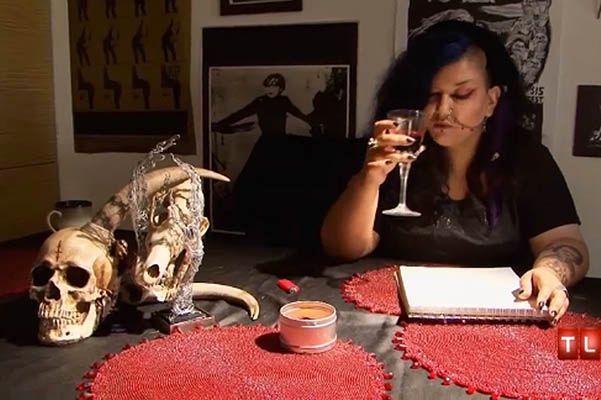 Why Are We Watching Her? Not to put too fine a point on it: She drinks blood.

How Did She Get Here? When she was a teenager, Michelle suffered from depression, and self-mutilated. One day, she happened to taste her own blood, and she’s been drinking it ever since.

What’s the Grossest Thing We See? We see Michelle shopping for blood, cooking with blood (including mixing a Bloody Mary, which she makes with real blood), and drinking blood straight up, from a glass. But that all seems like kid stuff once we see her “feeding” from a cut on her friend Johnny’s arm, particularly once we know how rigorous her screening process isn’t: “I usually ask that people be tested before I drink their blood, unless they are a very close friend of mine that I have known for a long time.”

What Have We Learned? Pig’s blood is saltier than beef blood. Men’s blood tastes different from women’s blood. And drinking lots of blood may not prevent a person from being anemic.

Who Is This Now? Kevin.

Why Are We Watching Him? He’s explaining why he’s leaving his hometown in Kansas, where he’s lived his entire life, to move with his family to Costa Rica.

How Did He Get Here? He fears a “pending economic collapse,” and wants to move somewhere it’ll be easier for himself and his family to live off the land.

What’s the Grossest Thing We See? Kevin invites prepping expert Marjorie to the house to introduce his family to the idea of eating unusual foods. To wit: mealworms, crickets, and scorpions. It’s also pretty rough when Kevin abandons his three young children in the woods near his home, supposedly to teach them how to survive if they get separated from their parents in the jungles of Costa Rica. It’s fine to give your kids bug-out bags of a size relative to their weight; I’m just not sure they’re going to do much with them IF THEY’RE 6 YEARS OLD.

What Have We Learned? There are people in this country who willingly allow people to bring scorpions into their homes. Actual scorpions.

Who Is This Now? Kay.

Why Are We Watching Her? She’s hoarded her home so badly that her township has placed a lien on the property to pay for repairs that may be necessary; she needs to clean it out to avoid further penalty.

How Did She Get Here? According to Kay, she’s not a hoarder. She will allow that “things are not organized well,” and that she’s just “a procrastinator and a terrible housekeeper” who would prefer to “do [her] other interests than things like cleaning and stuff.” (According to her daughter Shannon, the hoarding started getting bad when Kay’s husband died 18 years ago.)

What’s the Grossest Thing We See? In the kitchen, Kay has a glass mixing bowl full of cockroaches. She shows it to the camera. Most of them are dead, having fallen into the bowl and been unable to get out. But some are still alive, which is why she covers the bowl up again with a frying pan before moving on to the next mess. Later, when Shannon and her partner, Missie, come over to try to tidy up a little, Missie picks up the bowl of cockroaches and turns it perpendicular to the floor. None of them fall out. This suggests that what attracted the cockroaches to the bowl was some manner of sticky food mess, which fatally trapped the initial wave of cockroaches. But there may still be enough left to stick later generations and create ever more strata of cockroaches, alive and dead. What’s that? I could’ve stopped after “a glass mixing bowl full of cockroaches”? I suppose I could have. Sorry.

What Have We Learned? If you should ever come across a cockroach egg sac, it will yield 20 to 30 cockroaches. In other words, if you see one in your house, just move.