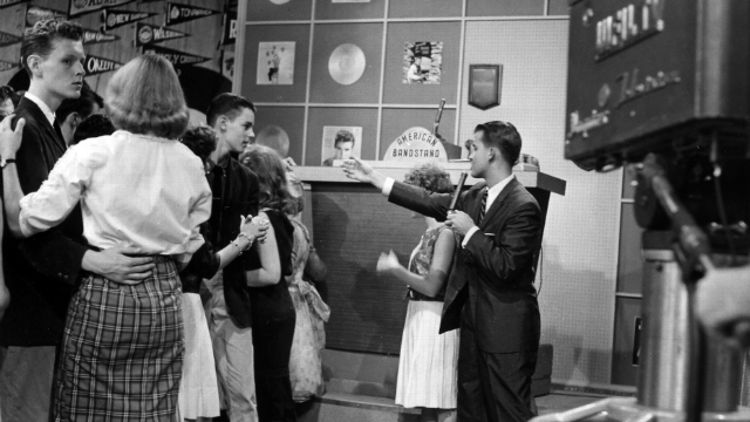 Pulitzer Prize–eligible magazine The National Enquirer broke an old but interesting story this week about Dick Clark’s American Bandstand. The ultra-wholesome image cultivated by Clark and his producers was unsurprisingly the result of behind-the-scenes pruning, as Clark would frequently conduct “witch hunts” to “purge gays from the ranks.” After taking over Bandstand from original host Bob Horn, who had been locked up for drunk driving (and had also recently been acquitted for statutory rape), Clark built the show into a platform for himself as a host, as well as a way to introduce rock and roll to the suburbs through the medium of television. Clark has been credited with inventing modern youth culture, but also of being a cold and calculating media gangster who was backed into selling his payola shares during an investigation by the United States government in 1960.

Many of the show’s male dancers were apparently gay, but had to remain extremely secretive about it lest they be ferreted out by producers and forced to resign. Tyrannical policies like these were extremely typical for the ’50s and early ’60s, and their acceptance was so widespread that gay dancers did not even want to risk talking about it until now. Former Bandstand regulars Frank Brancaccio and Eddie Kelly talked to the Enquirer about what really went on behind the scenes at the show. Both Brancaccio and Kelly refer to themselves as loners and misfits, who say that being on Bandstand gave them a place to feel comfortable being themselves. Well, as much themselves as Clark would allow. Although it was hush-hush, both men estimate that a lot of the male Bandstand dancers were gay, and that the homophobic straight guys they knew were well aware of this and would hurl slurs at them as they walked around public parts of town.

Kelly, now in his seventies, talks about how producers tried to bust gay dancers at popular cruising spots: “Philadelphia’s Rittenhouse Square was known as a meeting place for homosexuals. If you were seen in the square, you couldn’t go on Bandstand. So most of us really stayed away.” Most of the Bandstand dancers were Italian Americans from lower-class neighborhoods in South Philadelphia. And the local tough guy culture didn’t encourage any kind of creative expressive rebellion. Brancaccio said he was drawn to Bandstand because he could sense that it would accept him for who he was. But the all-inclusive teenage utopia crafted by Clark on Bandstand was largely an illusion. In reality, the show was nearly just as strict and conservative as the world the boys wanted to escape. The most popular regulars on the show were put together to form couples that home viewers could idealize, crush on, and stan for.

If this story sounds familiar, it’s because the Bandstand story is the basis for the John Waters movie Hairspray, which frames relevant socio-political issues of the time like integration with a fake Bandstand called The Corny Collins Show, relocated to Baltimore instead of Philadelphia. Bandstand was a formative show for teenagers and the not-yet-identified group now called tweens. I asked my mom, who watched the show religiously after school as a young teen, to put it in context for me, and she said it was what you watched when you were “learning to be a teenager.” She also pointed out that it was on one of only three channels available at the time, and watching it after school was a daily ritual for teenagers, something MTV picked up on when it reformulated the idea in the ’90s with less dancing and more teary-eyed pubescent screaming as Total Request Live. The dance show format is deathless, and it has gone through countless updates and twists: Soul Train, Solid Gold, and MTV’s The Grind had Bandstand in their blood.

While Clark was instrumental in pushing forward the format in many ways, and was a pioneer of integration through rock and roll on several fronts, he still only went so far. He ended the show’s previous “all-white” policy and allowed black artists to perform on the Bandstand stage for the first time, but there were still strict rules against interracial coupling among the show’s regulars. There’s no proof that he was enforcing personal prejudices, rather than just reinforcing a depressingly rigid contemporary status quo. Brancaccio and Kelly don’t seem to bear Clark any ill will. Charmingly, they still seem a little starstruck when talking about their time on the show. For homosexuals from a working-class poor neighborhood in the ’50s, Bandstand really was the paradise they’d been dreaming about as kids who would always be branded as different somehow. But they still weren’t allowed to be too different — to be openly gay at that time was not just taboo, it could be life-threatening. These boys were not growing up in an enlightened bohemian intellectual community. They were kids from the street, just trying not to get beat up for being themselves. Just as Dick Clark was creating the modern definition of teenager-hood, he was also defining the parameters that still haunt it; the general understanding that whoever is onscreen becomes what we accept as normal. For anyone left out, it’s tough luck.