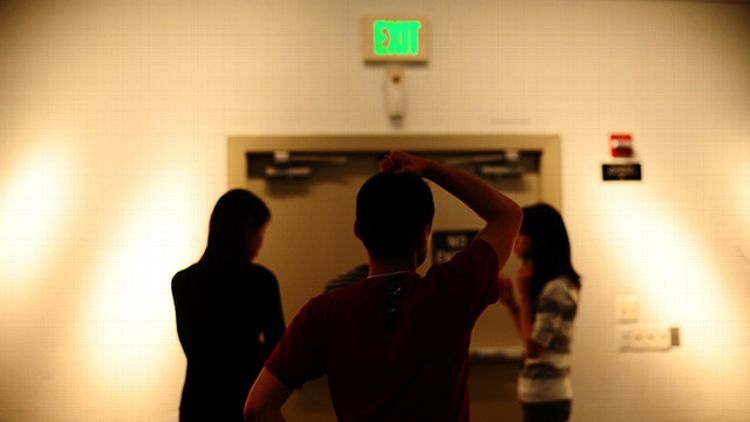 It’s too bad The Office‘s team-building exercise was hatched before mystery rooms, real-life claustrophobic entertainment exercises based on adventure games, became popular. The funhouses (not so fun for the claustrophobically inclined, of course) have become popular over the past two years, and involve visitors being trapped in rooms until they can figure out how to escape or the clock runs out and the game master intervenes. Inspired by locked-room mystery novels and video games, Kotaku reports that the biggest mystery room has opened in Beijing and measures “over 1,000 square meters […] divided up into five scenarios that can support up to fifty players at a time.” That’s a very large glass case of team-building, friend-bonding emotion.

Each room of the experience is part of a larger maze, and photography is forbidden once you’re inside. Somewhat strangely, the attraction is billed by a “reservation specialist” as a way to “decompress after a long week of work or study” — you know, because being trapped in a box can be so relaxing. The mystery room exercise has also become popular with companies trying to build corporate team unity, a confidence-boosting activity that encourages communication, strategizing, and creativity. Tim/Jim and Pam/Pam would have had a Very Special, sweeps-worthy time squeezing through tight holes and climbing ladders together, despite the occasional murder-scene theme.

Luckily, a passport isn’t required to experience the thrill (or terror) of being locked in a puzzle theme park with your friends and coworkers, because the phenomenon has been successfully imported to the States. Real Escape Games (REGs) found their U.S. foothold in San Francisco in 2012, and though they’re a little pricier (at around $30) than the $10 admission for the same kind of romp in Beijing, these games seem to sell out fast. Los Angeles also hosted an “Escape From the Werewolf Village” in November, and the werewolves are migrating to Seattle on January 18 and 19. The Kyoto-based company SCRAP, which is responsible for these events, bills itself as an innovator in the live-action puzzle industry, having hosted “the world’s first live action game” in Japan in 2007. The events, SCRAP says, reliably sell out despite a “2% success rate,” and boast over 10,000,000 participants from Japan, China, Taiwan, Singapore, and the U.S. since their inception.

The appeal and popularity of REGs is similar to LARPing, without the costumes. Both engage the player’s creativity in a way that’s often sidelined in spectator entertainment, creating an open-source narrative that more closely resembles the imaginary play of childhood than it does the passivity of belonging to a silent (or delayed-response) audience. In fact, the way we interact with what we see — via think pieces, tweets, and Facebook check-ins — seems to indicate a desire to affect the narrative of the media we ingest, so it’s not too surprising that some of us jump at the chance to co-author our entertainment.

SCRAP’s founder, Takao Kato, wrote that “if this game could become a bridge between reality and adventure, we would be so proud of ourselves to the point we’d be satisfied with our lives even if we just got wasted on beer for the rest of our lives.” There is something wholesome about old-fashioned physical human interaction, especially the kind that happens between strangers or acquaintances: a real room instead of a pixelated one, an audible conversation as opposed to one that’s read in your stale and croaky inner monologue, a goal that’s tangible and unencumbered by bitcoins or pinging sound effects. There’s the potential for something real to happen, and that’s thrilling. Even if that means being locked in a strobe-lit room with some guy from human relations and a pair of handcuffs.