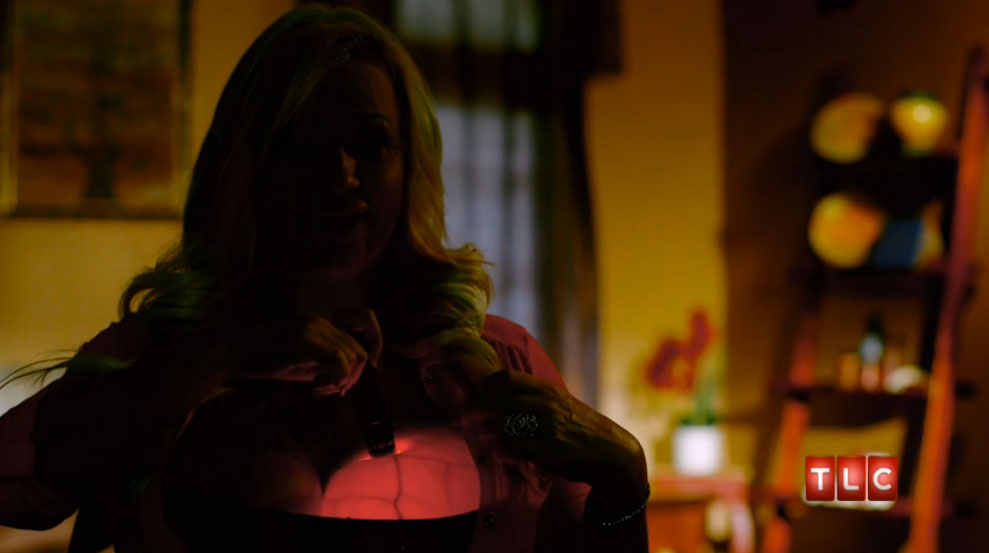 Who Is This Now? Lacey.

Why Are We Watching Her? She’s telling us about her addiction to cosmetic surgery.

How Did She Get Here? Before she paid around a quarter of a million dollars to transform her looks, Lacey was a perfectly normal-looking woman with an A-cup bust. But she had other plans for her body, and now her size LLL breasts qualify her to be a professional fetish model.

What’s the Grossest Thing We See? Lacey walks us through the process she has to go through to sleep, which involves supporting her breasts with pillows and making sure never to lie on either her back or her stomach — the latter because her breasts are so hard that it’s oppressively uncomfortable, and the former because having her implants rest on top of her lungs suffocates her.

What Have We Learned? There is at least one plastic surgeon in North America who’s sufficiently unethical to promise Lacey that he or she will nearly double the size of her breasts, to 5,500 CCs of liquid each (for scale: the high end of a normal breast augmentation leaves the recipient with about 1,000 CCs per breast), and canny enough not to appear on camera.

Why Are We Watching Him? He and his girlfriend Kelsey are participating in an intensive in-patient couples therapy program.

How Did He Get Here? Ghost and Kelsey have problems with infidelity, by which I mean that Ghost cheats on Kelsey.

What’s the Grossest Thing We See? In group, Kelsey tearfully tells the story of an ex nearly killing her by throwing her off a balcony, in front of her young son; in the aftermath of their breakup, she says, she spent some time as an exotic dancer. This becomes the only part of the story that Ghost hears, as he spends the rest of the episode haranguing Kelsey about her past profession, which she dropped before she and Ghost had even met. According to Ghost, all strippers are prostitutes.

What Have We Learned? Ghost has kind of an empathy problem.

Sex Sent Me to the ER (TLC)

Who Is This Now? Erik.

Why Are We Watching Him? He’s telling us about an embarrassing injury.

How Did He Get Here? For some reason, he thought it would be a good idea to break up a hike with his girlfriend by climbing into a tree and having sex in it. Then he slipped and, to try to keep himself from falling, gripped the branch with his thighs and gave himself a nasty scrape on the way to the ground.

What’s the Grossest Thing We See? Sex Sent Me to the ER illustrates the participants’ calamities with reenactments, and while seeing faux-Erik lying on the ground with blood all over his inner side with, apparently, his penis half skinned off is gnarly, seeing how the injury was allegedly sustained makes it hard for the viewer to believe the story is actually true.

Filed Under: Reality TV, TV, Television, The Lunatic Channels, Couples therapy, sex sent me to the ER, My Strange Addiction