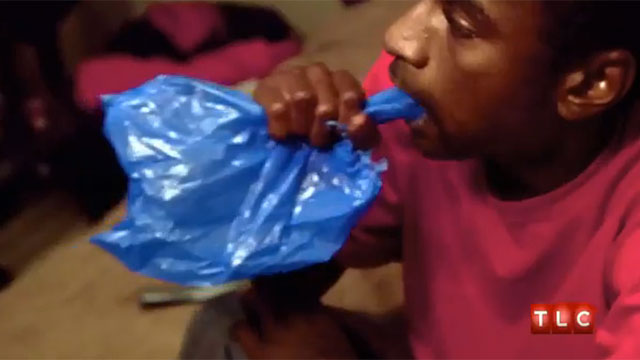 Why Are We Watching Him? He’s describing his addiction to eating plastic bags.

How Did He Get Here? We don’t learn what made Robert eat his very first plastic bag, but apparently he’s been doing it since he was 7, for a total of 60,000 in the span of his life thus far.

What’s the Grossest Thing We See? We see lots of footage of Robert eating bags, and the way he lets the excess hang out the side of his mouth and then pulls in more with each chew makes him look exactly like a goat.

What Have We Learned? Robert evidently loves bags more than he loves his fiancée: We learn at the end of the episode that, after filming ended, they broke up. Maybe next time when your lady takes you to a bakery, taste the wedding cake samples and don’t ask if the owner has any plastic cake stands around.

Why Are We Watching Him? He’s undergoing a temporary makeover.

How Did He Get Here? Nick is a professional prostitute, and one of his longtime clients asked him to change things up by covering his many tattoos with airbrush makeup and dressing in white quasi-formalwear rather than his usual tough-guy gear.

What’s the Grossest Thing We See? The client, Ginger, changes her mind as soon as she’s undressed Nick, so she takes him into the bathroom, and we have to watch while he stands there, totally naked and shaved, and lets her wipe off all the makeup with baby oil.

What Have We Learned? There are few things more vulnerable-looking than a self-styled tough guy standing naked and flaccid while a lady removes his foundation.

Who Is This Now? Tonya.

Why Are We Watching Her? She’s meeting her ex-husband’s new lady.

How Did She Get Here? Because Louis met his Filipina fiancée, Aya, online, and she’s planning to immigrate to the U.S. in order to marry Louis, Tonya is suspicious of Aya’s motives.

What Have We Learned? Tonya needs to back way off, my god.

Do You Like Prince Movies? Podcast: Richard Linklater and Sundance Discoveries