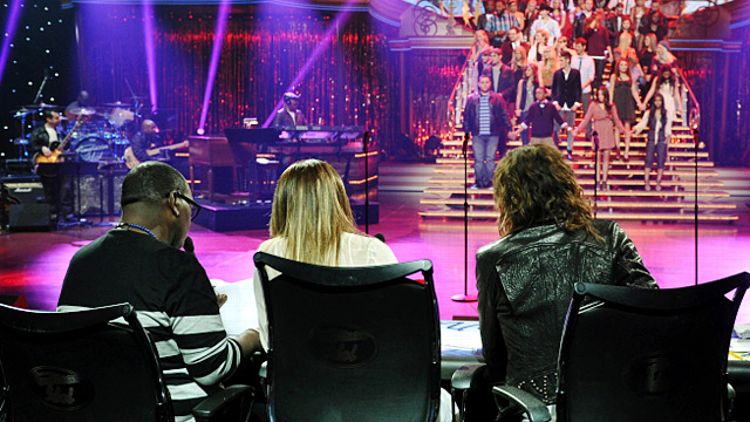 All season, Grantland Idol experts Jay Caspian Kang and Mark Lisanti will answer five very important questions following each performance show. This has already become an undertaking so arduous and futile that Sisyphus poops himself just thinking about it.

Confirming our suspicions, tipster @realmarklee alerted us to the fact that Heejun Han is, in fact, an actor who appeared in West 32nd under the name Dante Han. We already knew he was putting on airs, but does this smoking gun change the way you think about Idol’s most theatrical contestant?

#Lisantity: Finally, we have some closure. I ain’t mad at him. (People still say that, I promise.) There’s a very proud tradition of acting singers, from Frank Sinatra and Dean Martin to Zooey Deschanel and R. Kelly. Mariah. J-Hud. Justin Guarini. You can’t put limits on this kind of performer, you just turn them loose and get out of the way, hoping no overbearing, baritone cowboy clowns try to step between the runaway talent train and glory. As might be obvious from the disjointed, borderline schizophrenic constructions of the previous sentences, Heejun has so scrambled my baseline reality with his antics that I have no idea what I’m talking about. I talk so many craps on him. He is so tall and so pretty.

PS — Don’t think I didn’t notice that the IMDb page for West 32nd reveals the screenwriter’s name to be Michael Kang. I knew you were in on it. GET OUT OF MY MIND, HEEJAY KANG.

Kang: He would be in line to play Jeremy Lin in Racist Pun: The Jeremy Lin Story, but Hollywood has already announced the following cast.

We met a lot of new contestants last night. Who was your favorite?

Kang: Loved everyone in this group, especially DeAndre Brackensick, the kid from San Jose with crazy “Mariah in ‘88” hair. There’s nothing better than a male singer who can bust out a good falsetto. The real tragedy of Justin Timberlakes’s comedic “career” is that it left America’s falsetto hopes in the hands of Robin Thicke, who is pretty good, but can’t carry the mantle by himself. By the way, when was the last time the two most popular male falsetto singers in America were white? Is this not something everyone thinks about?

D’Angelo, we all heard that version of “Black Hole Sun” and know that you’re trying to make it back, so why don’t you do everyone a favor and just make it all the way back? The falsetto game needs you.

Also, I’ll admit to sharing Randy Jackson’s reaction to Jessica Sanchez. My jaw just dropped and I said, “Really? Really? Where have these two been? Why hadn’t we seen them until last night? I blame early racism that was vanquished by Linsanity. In the post-Jeremy Lin world, Fox’s producers knew they could no longer bury an Asian singing sensation and an ethnically ambiguous falsetto god. (Up to two Jeremy Lin references. Remember, we’re contractually obligated to mention him three times.)

Linsanti: I’ll admit to a sudden and unexpected fascination with Neco Starr, Cowboy Pariah Richie Law’s replacement on the all-starr (ugh, I know) Most International Team. We’d glimpsed him very briefly in the opening episodes, but this was our first extended look. And, honestly, I’ve already forgotten what he sounds like, besides a vague sense that he’s an edgier Leathers. But … that name. It’s inevitable fame distilled, ready to be splashed across every marquee in America, then typed onto the Defendant line of a trademark-infringement lawsuit by the AVN Best Gangbang Newcomer 2007 who’s terrified that when her Idol namesake goes supernova he’s going to destroy her hard-won brand recognition and instantly consign her to the manicured-foot-on-an-F150-gas-pedal fringes of the business.

BTW, when you Google “Neco Starr” to find out if there is, in fact, a parallel pornographic artist, you find things like this, where the Frankie Muniz* of YouTube Idol criticism blows the lid off the Neco Starr name issue. How much deception can we countenance in a single recap? Is “Neco Starr” the “Lana Del Rey” of Season 11?

Was the elimination of Jairon Jackson a prime example of fat-ism at play? How else do you explain one of the three best voices on the show getting sent home?

Lisanti: There’s really no sense whatsoever to be made of this. My notes on the show read: “JAIRON GONE!” My e-mail to you while in the throes of a still-fresh shock reads: “JAAAAIIIIIIROOOONNNNNNNN!!!!!” This is the worst. Cowboy Richie obviously has friends in low places.

Kang: They’re just setting up Cowboy Richie for the inevitable sex scandal a la Reverend Ted Haggard. As for Jairon, there’s no explaining it. Maybe because he looks like a young Bernie Mac and had to stand next to Neco Starr, a.k.a. Black Hermes? What else could it be, if not fat-ism? He had that rare ability to separate every note into its own distinct tonal thing (my piano lessons are really paying off right now) and had shades of that beautiful, effortless Sam Cooke power.

Take us through the emotional process of watching Johnny Keyser being kicked off the show.

Kang: I was a bit disappointed, honestly. I wanted the show to set him up a bit more, get him even more puffed up, show him “negging” a bunch of 15-year-old girls before he got unceremoniously dumped off in 12th place. This was too fast.

Lisanti: And we couldn’t even eke a tiny bit of satisfaction out of it because Jairon got aced about 10 seconds later. There was no time to imagine that after the camera moved on to the next elimination victim, a stunned Keyser stood idly rubbing the spot on his lantern jaw where Fate bitch-slapped him, trying to understand the sting of this new sensation. Of course, he’s probably already back on the Florida waterskiing circuit by day, crushing some Joe Cocker karaoke at night, and generally drowning that 15 seconds of sorrow in the kind of motorboating-10-starstruck-Hooters-waitresses-joy we bitter content farmers can only dream about. How did this Keyser thing suddenly turn into our misery? Johnny always wins. Always.

Speaking of Steven Tyler, here’s a question. Neither of us has laid eyes on Liv Tyler or Alicia Silverstone in many, many years. If you HAD to marry one of them sight unseen and weren’t allowed to do ANY research via the Internet or stalking, who do you choose? By the way, I just high-fived my cat for thinking up this question.

Kang: I think I’d go with Alicia because if everything went wrong, we could at least spend our evenings reenacting scenes from Clueless.

Jay Caspian Kang was named after an ‘80s singer who now does infomercials.
Mark Lisanti’s turnover-to-assist ratio is still higher than it should be.