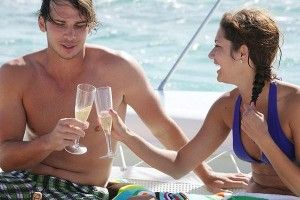 I’ve been thinking about it a lot and I have decided that we’re going to have to see other shows. It’s not me. It’s you. You see, Survivor, in the GRTFL you’re only as good as your last start — and you sucked last season. Really sucked. I respect that you’re trying to rope me back in with a format change, Jeff Probst ghost-riding a helicopter, and a super-hot country gal who scoops up chickens like Ozzie Smith scoops ground balls. But it’s too little, too late. You are spending this GRTFL season in the GRTFL Development League. (I refuse to make the easy Jeremy Lin joke here; I have to save my easy-joke energy for the rest of the column.)

Courtney (The Bachelor, Lisanti), 30 points: Beauty has a strange effect on humanoid males. When a male is confronted with a beautiful female who has shown sexual interest in him, his brain immediately launches an onslaught of psychological mechanisms designed to distort the reality that the woman, however beautiful, might be a terrible person. Such is the case with Ben the Bachelor and Courtney the Model. His delusion takes her evil obsessiveness and turns it into “a little bit of an edge,” her unfriendly, aggressive nature into “being assertive and confident,” and the fact that she has no female friends into “standing out.” Ben the Bachelor’s subconscious has him convinced that Courtney the Model is a good-natured sweetheart he could spend the rest of his life with. What his subconscious is not allowing him to recognize is that she is a manipulative supergenius more concerned with winning the contest than winning the heart of her future husband. She is a wolf in Cher’s clothing, deftly using a classic seduction technique to ensnare her prey. This particular technique is as effective as it is simple, one that is best described as “I-am-going-to-keep-telling-you–that-we-are-emotionally-drifting-apart-and-you-are-going-to-do-whatever-you-can-to-sway-my-opinion-’cause-I-am-hot-and-that-alone-keeps-you-from-realizing-I-am-empty-on-the-inside.”

Let’s track her progress through the past four episodes:

Courtney: “Should I take my robe off? I am not some sexy vixen or anything.” (Suuureee you’re not, Courtney.)

Courtney: “But it is getting hard for me. I lose sight of nights like the other night and the passion.”
Ben: “I don’t know why you would lose sight of that, because I haven’t lost sight of something like that.”
Courtney: “I mean not completely. I just want to feel special, and it is hard to feel that way when there are so many girls. I just need to keep that spark alive.”

It’s all right there! Clear evidence she is using a strategy that’s three parts “I’m not that into you,” one part “by the way, I look amazing naked,” and all parts 100 percent effective.

Oh yeah, I almost forgot: She also can control the future with her mind.

After crying a couple times because she wasn’t getting a one-on-one date (10 points), Courtney declared, “I haven’t had a one-on-one since Sonoma and it would be very telling to me if I don’t get a one-on-one. It would be disappointing. If you are really feeling crazy about somebody you would think that you would … ” Then there was a knock on the door and a one-on-one date card with her name on it appeared. She wanted a date and she got it. She wanted to make out with Ben a couple times, and just like that she got it (10 points). We should all be rooting for Courtney to win, because if Ben the Bachelor picks Kacie B. over her in the last episode, Courtney very well may end the world with her mind.

Deena (Jersey Shore, Connor), 30 points: After three seasons of being a wing-woman, settling for sloppy seconds and earning sexual sympathy from the Jersey Shore audience, Deena finally coitused. I feel a little bit like I did when the Red Sox won the World Series in 2004. The Deena drought is over! (25 coitus points + 5 kissing points)

There is a phenomenon in reality television that I have never encountered in actual reality reality — the coitus peeper. Upon seeing that Deena has male company for the evening, Snooki pops up from her beanbag perch and combs the house in search of prophylactics for her meatball in crime. On the surface this may seem like a selfless act of friendship — a Chris Paul-like coitus assist — but there is more at play. Snooki is a coitus peeper. Snooki wants nothing more than to watch her fellow meatball in the act of coitus. What pleasure she derives from this I cannot fathom, but she not only coitus peeps … she coitus commentates! This is a breakthrough moment in the evolution of Snooki’s career. Decades from now, when we look back at her body of work, she’ll be known less as a drunken Dionysian mascot slammering her way up and down the tri-state area and more as the Howard Cosell of coitus.

The Situation (Jersey Shore, Lisanti) 30 points: Is it possible that a woman who made out with Mike and his bare stomach in a bar (5 points), displayed her own camel toe, and then demanded birthday sex (25 points) is too classy for The Situation? Yes, yes it is.

Entire Remaining Cast (The Challenge, Various GRTFL Teams), 25 points: At approximately 10:22 p.m. Eastern Standard Time on February 13, 2012, TJ Lavin declared, “You guys killed it! Nice work! That was amazing! Everybody did a really good job!” thus creating a glitch in the Kill It Time Continuum (25 points). TJ, EVERYONE CANNOT KILL IT! That is not how killing it works. Once someone kills it, it is therefore dead so what is everyone else killing? We’ve created a “killed it” monster. I think I need to write TJ a 3,000-word e-mail about how “killing it” works. [Ed. note: Can we get our MIT guy to explain it to him with theoretical physics?]

Johnny and Camilla (The Challenge, Lisanti) 25 points: Oh, now Johnny Bananas and Camilla killed it too (25 points)? Now you’re just messing with me, TJ. I know you are hip to this whole league, have your own team, and are padding your stats. You’re basically Pete Rose without the awesome haircut.

Emily (The Bachelor, Kang), 15 points: This week, Emily had a couple of encouraging canoodle seshes with Ben (10 points), but they were followed by a teary exit (5 points). The good news for Emily is that she won’t be remembered as the prude one who didn’t know how to kiss or the one who brought her grandma. The bad news is that she will be remembered as the one that tried to win Ben’s heart by rapping about his sex life. Little did she know, Ben has that ground already covered.

Rachel (The Bachelor, Jacoby), 15 points: Sure, Rachel didn’t find the love of her life and left after a makeout (5 points) and a couple of cries (10 points), but at least she can chalk it up to the fact that Ben the Bachelor Who I Have Never Seen in the Same Room at the Same Time as Rafa Nadal is into brunettes. It’s important to lie to yourself to dull the sting of rejection. So Rachel, yeah, you totally didn’t end up as Ben’s fiancée, not because you’re a terrible hang and quit your job to be on a reality show … it was because of your hair color. Right.

Rachel and Aneesa (The Challenge, Kang), 10 points: Hey, The Challenge Producers! Just because you blew our minds with the trivia/spelling/catapult challenge last week doesn’t mean we won’t notice if you completely mail it in the next week. The Dome challenge that Rachel and Aneesa won (10 points) looked like a reject from the Double Dare research and development department, and the “hold on to this log and swim” thing was shot at the same lagoon as the trivia/spelling/catapult challenge. That lagoon is dangerous. The combination of steroid runoff, STD juice, and Aneesa blood that has been spilled into those waters is likely to combine and form some type of deadly mutant chupacabra. If you honeymoon in the Dominican this summer I would steer clear of all lagoons. You do not want to meet The Challenge cast’s spore monster.

Nicki (The Bachelor, Simmons), 10 points: Even though she put up a 10-point kiss-and-cry combo this week, I feel bad for Nicki. She is clearly going home next week and would’ve been much better off being sent home this week instead. Why? Well, next week Ben visits the hometowns of all of his prospective fiancées and has this awkward “I might propose to your daughter on national television in a couple weeks but I might not, cool?” conversation with the dads. It always makes me wonder why the families open up their homes to this demented television production in the first place. What do they stand to gain from it? I can’t wait until one season when the dad and The Bachelor are having that conversation and the dad flips on the dude like, “You sure you want to marry my daughter? She’s a total shitshow. She is 26 years old and never moved out of the house, she still listens to The Backstreet Boys, she thought Santa Claus was real until she was 16, and last year she flew to Arizona because she didn’t realize the University of Phoenix was an online school. Trust me, dude, I wouldn’t wish her on my worst enemy, just leave and we will pretend this never happened.”

Kacie B. (The Bachelor, Jacoby), 5 points: Kacie B. on Courtney The Model Who Won’t Stop Talking About Being a Model, “That bleeping bitch. It took every freaking fiber of my being to not spring across the room and punch her in the face. It is not because I’m jealous of her, it is because she is the bleepiest piece of person I have ever seen in my whole life.” I can’t wait until the final episode when Ben The Bachelor is forced to decide between the sweetheart southern girl Kacie B. and Courtney The Evil Genius. That decision will be a microcosm for the struggle between the good and evil that we all deal with every day. Actually, no, it isn’t. It is actually the classic matchup of “hot crazy girl” versus “sweet cute girl.” My money is on hot and crazy 11 times out of 10.

Chris Brown and Blunts in a Flourless Cake: About That Rihanna Birthday Party