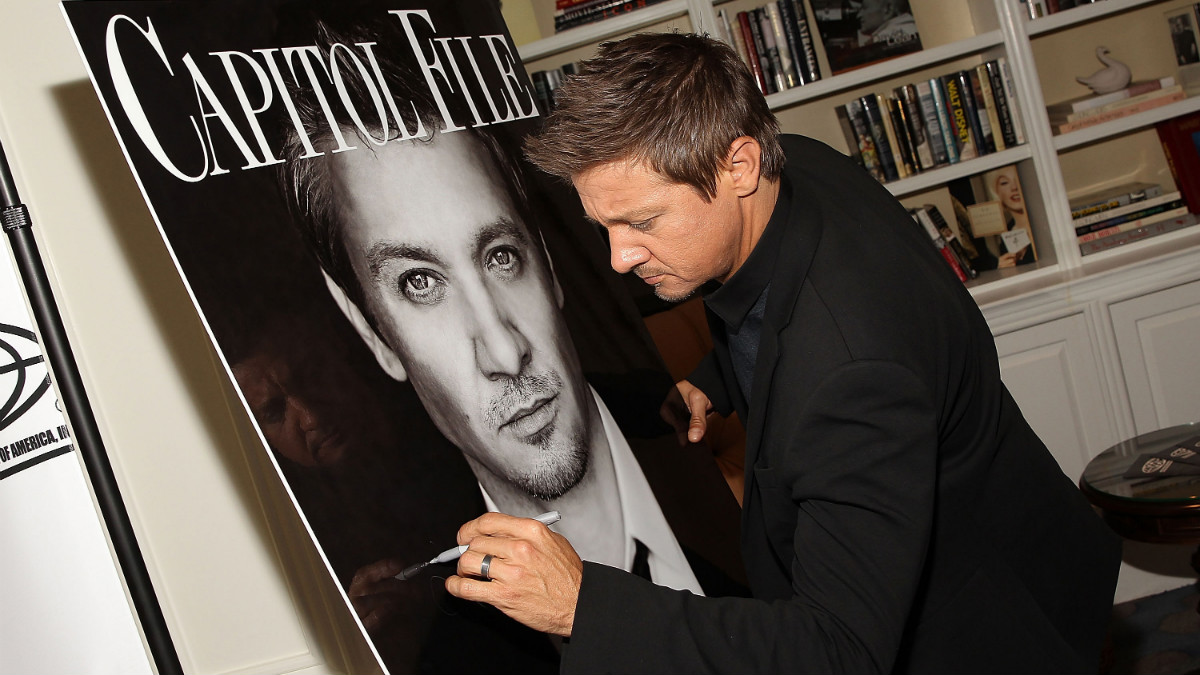 Surprise Celebrity Wedding of the Week: Jeremy Renner and His Baby Mama

Jeremy Renner is a man of mystery. He became a dad in March 2013 with little warning. Now he’s gone and married the mother of his daughter, Sonni Pacheco. He told Capitol File: “I have tried to protect my family’s privacy, my wife’s privacy. I don’t need her to get hammered with my life. … Privacy issues are important because I want her to go about her day without being bothered.” The giveaway must have been that he’s now sporting a wedding band. If he wants to preserve his wife’s privacy, perhaps he should have removed that ring for his Kill the Messenger junket or declined to talk about it at all.

Given how successful he is at house flipping, I’m not sure why Renner needs to continue acting (aside from the fact that he may like it). In 2013, he flipped a $7 million Los Angeles home for $24 million. Sure, he probably put in a lot of money to improve the house and turn it into a 1920s Art Deco–style home, but I’m sure that renovation cost less than $17 million. When your side hustle becomes this lucrative, maybe it’s time to give up acting. I don’t think anyone liked him as Hawkeye, and Matt Damon has reclaimed the Bourne throne anyway. Go with what you’re good at, Renner, and enjoy married life!

Tax-Evading Celebrity of the Week: Mike “The Situation” Sorrentino

I know Jersey Shore represents the apex and culmination of something, but I’m not sure what it is. Perhaps it was the realization of the noncompetition reality TV format sublime, a show so perfect for such a fleeting moment that it’s hard to truly understand its gravity. But then its stars make the dumbest of decisions, belying the esteem of the entire enterprise.

Leave it to Mike “The Situation” Sorrentino, he of the gym/tan/laundry lifestyle, to remind us of the Jersey Shore paradox. He was arrested and accused of tax evasion. A few important notes here. To begin, Situation and his brother/business partner Marc allegedly failed “to pay federal taxes on $8.9 million in income earned through two companies they controlled: MPS Entertainment LLC and Situation Nation Inc.” I believe this money was earned over several years — including 2011, a year in which Sitch allegedly did not file a personal tax return at all, even though Jersey Shore was still on the air. And yet, what an astonishing amount! Now I know why all the other roommates hated him. It wasn’t because he meddled in relationships or lied about them to others. It was probably because he was outearning them all.

Mike and his brother are also accused of claiming “several luxury cars, high-end clothes and even personal grooming costs” as business expenses. But when you are the purveyor of a GTL lifestyle and brand, that may be legitimate. After all, maintaining The Situation is a full-time job.

Overdue Divorce Filing of the Week: Bruce and Kris Jenner

Kris and Bruce Jenner have been separated since last year, even though they continue to commingle at events like Kim Kardashian and Kanye West’s wedding. The Jenners have made it official, though: Kris filed for divorce earlier this week. The two are splitting their assets with the help of business managers, but no lawyers, which is just about the most Kardashian thing to do. If we’ve learned anything from Mama Kris, it’s that everything in life can be, at the very least, a business transaction. I’m pleased to see she doesn’t deviate from her primary mode of existence, even in divorce. They’ll share joint custody of 17-year-old daughter Kylie, who, like all teens, used Instagram to express how she was feeling. It’s something about disconnect and insecurities from an “R.M. Drake.” Googling the quote and the name brings up nothing but links to pages that have reproduced the quote in HTML. So until proven otherwise, I’m assuming this is a made-up deep quote prepared in advance specifically for Kylie to use to comment on this divorce.

Semi-Surprising Divorce of the Week: Amber Rose and Wiz Khalifa

Amber Rose filed for divorce 14 months after marrying Wiz Khalifa, with whom she has a 19-month-old son. They’re both accusing each other of cheating — him with everyone, her with Nick Cannon. Cannon is essentially Rose’s manager, landing a book deal and TV show for her, but his people deny there is anything else between them.

The artist formerly known as Lil Bow Wow, now known as Shad Moss, got engaged this week to Erica Mena from Love & Hip Hop. Shad Moss is his legal name, and he decided to go back to it in June. Getting engaged was a swift move in terms of brand awareness, because I had no idea this switch had been made. Good luck to them!

13 Times Denzel Washington Has Dispensed a Special Brand of Justice