Further Notes On the Death of Hollywood 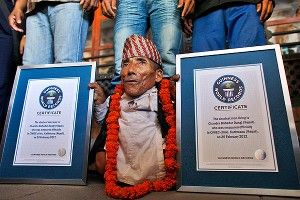 Oh, hey, look, another project that attempts to bluntly, blindingly smash a preexisting entity with brand recognition but no narrative whatsoever into a coherent movie: Ladies and gentlemen, say hello to the Guinness Book of World Records movie. Deadline reports that Warner Bros. has hired The Office‘s Danny Chun to turn the good book into an action-adventure kind of thing, and explains that there’s actually a very close precedent here: “Paramount has tried more than once to turn Ripley’s Believe It Or Not into a big tent pole. The studio was weeks away from starting production in China on a $175 million film with Tim Burton directing Jim Carrey as columnist Robert Ripley before pulling the plug in 2007.” That sounds like a terrible joke but is, as far as I can tell, not a terrible joke.

Seriously, though, upon further inspection, maybe we shouldn’t be so critical. Doesn’t a Guinness Book movie make more sense than the endless litany of board game flicks that have bombarded the screen? The latest, Battleship, just flopped; also, as I always feel compelled to mention in these situations, they’re actually making a View-Master movie. (And let’s not ever, ever forget the CW’s musical chairs show, Oh Sit!.) At the very least, the Guinness Book offers a million built-in narratives, in the form of all the brilliant weirdos attempting to drink the world’s largest mocha frappuccino or whatever. In December, The New Yorker profiled Ashrita Furman, a celibate, obsessive compiler of World Records: “In 1993, he climbed to the snowline of Mt. Fuji on a pogo stick, sixteen miles up and back, which was the greatest distance ever travelled on a pogo stick … in 1987, he jumped underwater on a pogo stick in the Amazon River for three hours and forty minutes, longer than anyone ever had.” Wouldn’t a Furman biopic work? Or maybe the movie could be a simultaneous worldwide competition, with a bunch of Furmans running around, trying to best each other in holding the most records of all time? Have I convinced you yet that a Guinness Book of World Records movie isn’t the worst idea of all time? No?

Filed Under: Further Notes On the Death of Hollywood

More Further Notes On the Death of Hollywood

See all Further Notes On the Death of Hollywood

Grantland Reality Fantasy League: The Mushroom Farmer Was a G