Blasphemy: Bill Murray Could Be Out on Ghostbusters 3? 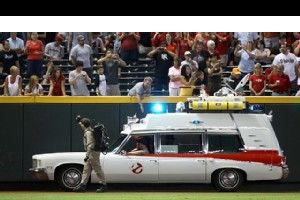 For as long as there have been rumors of a third installment of the Ghostbusters franchise, there have been rumors of Bill Murray hating the idea of a third installment of the Ghostbusters franchise. In interviews Murray is mostly coy about his feelings toward the project, stopping short of out-and-out animosity and settling instead into a nice, deep, indifferent groove. Well, there was that one time he knocked Year One, the previous movie from Ghostbusters 3 screenwriters Gene Stupnitsky and Lee Eisenberg: “People who [saw it], including other Ghostbusters, said it was one of the worst things they had ever seen in their lives.” (Side note: I myself am not a Ghostbuster, but cannot disagree with their appraisal of Year One.) So with Dan Aykroyd both rewriting the script and talking up the thing every chance he gets, plus a legion of nostalgia-demanding consumers salivating at the mere prospect of more Ray Parker Jr. jams, the perceived battle lines in the war for GB3 have long been set: Aykroyd/humanity vs. Bill Murray.

Which brings us to this, the latest cruel twist in the saga. Here’s Empire, reporting on the project:

“As for the internet rumour that Murray recently shredded a Ghostbusters 3 script and sent it back with a note that said, ‘No-one wants to pay money to see fat, old men chasing ghosts,’ Aykroyd denied it with vigour. ‘Bill Murray is not capable of such behaviour. This is simply something that would not be in his nature. We have a deep, private personal relationship that transcends business. We communicate frequently and his position on the involvement in Ghostbusters 3 has been made clear and I respect that. But Bill has too much positive estimation of my writing skills to shred the work.'”

But then: “Even more intriguingly, Aykroyd hinted that Bill Murray may not return as Peter Venkman, and that the character could be played by a different actor, a la Jack Ryan.”

Stop it. No. Stop. OK, maybe Bill’s being a bit of a jerk by exercising his implicit UN Security Council of Ghostbusters veto power (for the record: United States: Ernie Hudson; United Kingdom: Harold Ramis; Russia: Murray; China: Aykroyd; France: Moranis). But this is the burden that you carry, Dan Aykroyd. It’s all Ghostbusters for one, and one Ghostbuster for all. Are you in fact threatening Bill Murray with a replacement in order to get him to go along with the project? You think Bill Murray cares about being replaced? He’s got enough Garfield: A Tale of Two Kitties dough to sit around the Antilles getting manicures for the rest of his life if he wanted to. But he cares about not making a crappy Ghostbusters sequel. And any Ghostbusters sequel with a replacement Peter Venkman would be a crappy Ghostbusters sequel.

Come on, Aykroyd. Keep the peace. Keep the unity. If the team fragments now, well, then the nonbusted ghosts have already won.

Filed Under: Bill Murray, Further Notes On the Death of Hollywood, Movies

Oscarmetrics: The Case for Eliminating the Best Animated Feature Award