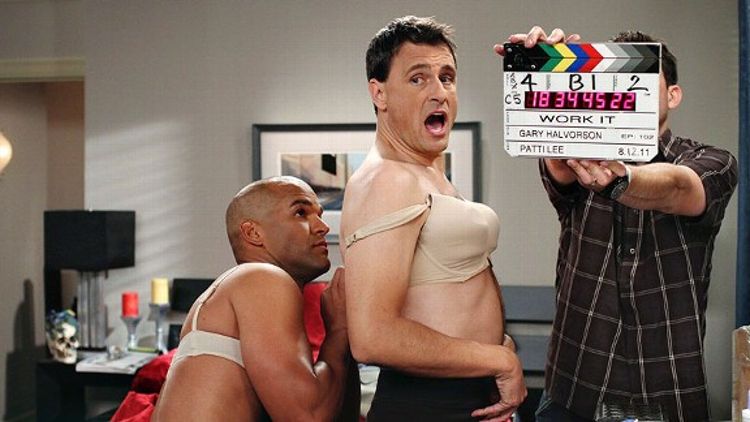 There come times in life when a person must muster courage in the face of failure and shame, when a person must confront, for all the world to see, what he has wrought. Yesterday, at ABC’s TCA Panel, that time came for ABC Entertainment chief Paul Lee. His cross to bear: Work It, ABC’s new sitcom about a couple of bros who dress as women in order to get jobs. “Jaw-droppingly horrendous!,” Grantland’s Andy Greenwald raved. “A retrograde shame-spiral of a series that hates women nearly as much as its viewers will hate themselves!” And the critics almost unanimously agreed. So what did Paul Lee have to say for himself?

Take it away, EW:

“He clearly realizes the polarizing show remains a hot topic — which is why he began his morning panel with his idea of a joke: ‘So what do you think of Work It?’ The Brit was loath to say exactly how he feels about the comedy’s (dreadful) performance so far, other than to stick to his original mantra about developing ‘ambitious’ shows. ‘We thought there was room for a very very very silly show.’”

A very very very silly show! A very very very silly show indeed! But the sharpened spears of the critic community aren’t the only ones Paul’s dealing with. GLAAD recently released an ad saying Work It could “harm transgender people” and “contribute to the high levels of job discrimination that transgender Americans face and will give license for people to mock and ridicule those whose gender expression might not fit with what society considers the norm.” To which Paul Lee says: “I didn’t really get it. I loved Tootsie. I still love Tootsie. I didn’t get it. But that’s probably me.” Paul. ‘That’s probably me’? What? Aren’t you running this network? Are you really allowed to shrug your shoulders when GLAAD complains about your cross-dressing show? That airs in the year 2012?

And what do the masses think? Work It premiered to 6.14 million viewers and a 2.0 in the 18-49 demo, lower than its cancelled timeslot predecessor Man Up. That’s good enough to keep on the air for now, but ratings will probably have to improve long term. So to recap: Lee and ABC have to deal with the show’s ratings problem, its transgender-image problem, and its lack-of-funny-jokes problem. And somewhere Paul Lee is sitting down in a comfortable chair, maybe with a scotch and a cigar, and thinking to himself that the guy who made Sorority Boys got off easy.

Filed Under: ABC, Further Notes On the Death of Hollywood