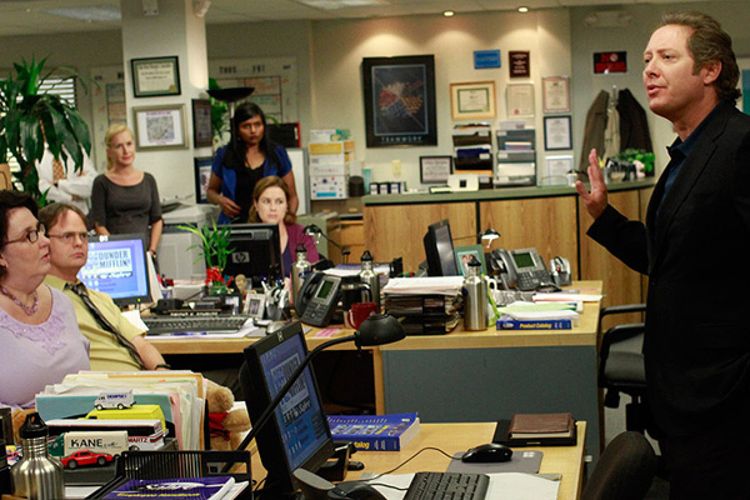 Transitions of power are rarely smooth — just ask Egypt — so no one expected The Office to weather the loss of Steve Carell unscathed. But few could have predicted how quickly the long-running sitcom would devolve from “Must-See” to barely watchable.

Now toplined by an awkward alliance of the eager-to-please Ed Helms and the phoning-it-in James Spader, the show has struggled mightily to redefine itself in its eighth season. But it’s not the new internal power structure that’s solely to blame. The departure of Michael Scott — and Carell’s goofy, glue-like charisma along with him — has exposed foundational rot of the sort not usually seen outside of Schrute Farms. As the show returns with new episodes this week, it’s high time to leave the safe, reflective comforts of our hair rooms and examine just what went wrong — and determine whether there’s any hope of turning things around.

Steve Carell’s exit last May was well publicized and well reasoned — why tussle with Kathy Bates when Meryl Streep is available? — but within the carefully manicured landscape of The Office it was genuinely shocking, the first major upheaval in the show’s history. Of course, at the start, that very stasis was one of The Office’s main selling points. Early seasons nimbly skewered the oppressive repetition of our modern working world: the forced camaraderie, the inane traditions, the endless paper jams. But the small triumphs of these unambitious Scrantonites — over boredom, over heartbreak, over Dwight — only got smaller when considered over time. Seven years ago, Jim’s defiant smirk was a small spark of hope in the face of inevitable conformity. Now the sight of him still chained to the same overcrowded desk is downright depressing.

A comic show celebrating the impossibility of change has always been a tough sell, which is why it’s a marvel that The Office’s talented writing staff has managed to keep things humming ‘til now. It’s worth remembering that the original U.K. version lasted a grand total of seven and a half hours — the U.S. edition is already up to five hours this season alone — and that proved more than sufficient to spin a tale of no-hopers stuck in a dismal corporate cul-de-sac. The American Office, quite rightly, differentiated itself from the outset: In the New World, the workplace wasn’t a sad metaphor for the crushed dreams and dreary reality of adulthood. Rather, it was an allegory for family, the screwed-up group of misfits one gets stuck with and learns to, if not love, then tolerate. The cast ballooned accordingly, filling out the margins with a deep bench of That Guys and Girls. The executive decision to let events unfold at a believable, human pace reaped huge dividends. That Jim and Pam’s office flirtation was allowed to develop into love and then marriage without the typical excitement-extending array of sitcom tricks — no suddenly appearing exes or accidental engagements to British chicks — was hailed, rightly, as a sign of mature, confident storytelling.

But at a certain point, the commitment to small-bore yarn-spinning ceased being an attribute and became an anchor. The sad joke at the heart of both versions of The Office was that these people were stuck; once the American show rejiggered that joke into a core conceit, the long-term potential for the series was doomed. Nowhere is this more evident than in the slow stagnation of Jim and Pam, once bright characters whose sad, slow embrace of mediocrity has transformed them from America’s sweethearts to candidates for the lead roles in Revolutionary Road 2. At a time when American offices — the real ones — have become more tenuous and uncertain than ever, the show meant to mirror its reality has drifted impossibly into fiction. No one expects to work in the same place forever anymore; careerist stability is as irrelevant as paper. Steve Carell’s departure didn’t just offer the show its last best shot at shaking things up, it may have established, once and for all, that such recalibrating is impossible. Because, after 162 hijinks-filled episodes, the only logical thing left for any of these people to do is leave. Phyllis and Stanley’s retirement party would be worth watching, or even a stately, Carell-like push out the door for Darryl, whose slow-jams would be missed, but his unlikely ascent from the warehouse to greener pastures would make for affecting television. But no one will be leaving this climate-controlled prison anytime soon; to do so would puncture the show’s impenetrable sense of birthday cake-fueled bonhomie.

So, if downsizing is out, would it be too much to ask for some upheaval to visit the office? Other than Pam and Angela’s occasional fertility, nothing of note has happened to any of these people in eons. Like drones in Pyongyang, nothing stops them from reporting to work — not death nor taxes, not economic hardship nor sudden windfalls. Still, it’s possible to daydream about mildly engaging storylines springing out of unlikely sources. Perhaps Meredith needs a liver transplant or Ryan’s carefully curated Scranton gossip Tumblr goes viral. Anything to shake up the maddening spectacle of parties, meetings, holidays, and uncomfortable, vending machine-supplied lunches. But maybe it’s unfair to look to the supporting cast for help. The problems with The Office — like with Egypt — start very much at the top.

At first, the elevation of Andy Bernard to regional manager made sense on a number of levels. On the creative side, the character was both strongly defined — his Ivy League a cappella striving is as indelible as it is annoying — and relatively fresh enough to weather the increased heat of the spotlight. And, from NBC’s perspective, the promotion was also a plus: Thanks to the box office success of The Hangover films (which, combined, have earned more than the GDP of Liberia), Helms is a bona fide movie star. Keeping him tied to his small-screen contract is a win for a network otherwise reduced to bargaining for celebrities at the dollar store or the senior center.

Unfortunately, the move has proved to be misfire. Andy Bernard’s comedy comes from his awkward, wheedling need to be liked. This, like most things desperate for one’s attention — hyperactive puppies, murderous stalkers, news of famine — works best in small doses. When placed as the central engine of a sitcom, it’s borderline unbearable as evidenced in the first few episodes of the season, nearly all of which shared an identical structure: Andy wants to be respected in his new position, everyone makes fun of him and/or forces him to get an ass tattoo, only to end with the already well-established reveal that everyone actually already likes him just fine. Quid pro status quo.

What’s worse is the addition of James Spader’s mystifyingly opaque Robert California to the equation. California — played by Spader with an off-putting air of disengaged superiority usually seen in petty despots and NFL owners — is an omniscient overlord who revels in his power and lack of self-doubt. This makes him both frustratingly static and a terrible foil for Andy, who now must bend over backward in two directions at once. What allowed Michael Scott to coast above the fray was a bedrock belief in his own abilities; that his jokes were funny, that he truly was the world’s best boss. This, in turn, provided the show ballast for its greatest contrivance: that over seven years, the eye-rolling office eventually bought in to the bunkem their weirdo manager was selling. Now, faced with Andy’s flop-sweating desperation, everyone seems as if they could manage just fine without him.

The solution is not to take the show’s usual way out and add additional cast members — the overstuffed ensemble could now field both sides of a regulation baseball game, leaving precious little screen time for the best of the backbenchers (looking at you, Subtle Sexuality!). The better bet is to promote once again from within. Last season it was established that Jim — now, as ever, the only remotely competent human working in the Scranton Business Park — was happier with the lower stress and potentially higher profits of life as a salesman. But this was a cop-out for an increasingly irrelevant character. What if Jim, now with two kids at home depending on him, suddenly discovered an ambitious streak he didn’t know he had and challenged Andy for the leadership post? Not only would this create a plot (and joke!) driving rift not seen since the glory days of the Michael Scott Paper Company, but it would also provide necessary push-back to Andy’s puppy-dog neediness. Ever since their days together in Stamford, Andy has resented Jim’s effortless, smirking cool. A good old-fashioned power struggle would be just the thing to light a confident fire under Andy and curb Jim’s slow descent into Rockwellian purgatory. Plus, it would be fun as hell to watch the rest of the office line up behind their preferred candidate: Kelly’s backroom shenanigans, Kevin’s divided loyalties, Creed’s complete lack of awareness that anything out of the ordinary is going on.

As for Robert California? Either have him fall hopelessly in love with Meredith or ship him back to Malibu where he belongs.

Change may be uncomfortable for the tenured drudges of Dunder-Mifflin’s bulletproof Scranton branch, but it’s clearly necessary. Unfortunately, it’s also impossible. Forget the creative reasons; any disruption would hurt The Office, the brand. NBC renewed the show for this first post-Carell season because it was one of the very few series on its air that could charitably be called a hit. Now there’s no choice but to keep it going, because while ratings have declined precipitously (its average of 5 million viewers a week are comparable to Season 1), it’s nothing compared to the sinkhole that is the rest of network’s lineup. And there’s no plausible candidate to replace it as the flagship of NBC’s flagging Thursday night. While there’s no shame in a classic show getting old, there is considerable shame in not letting said show die with dignity. But even though The Office may be in worse shape than Angela’s beloved cat Sprinkles, euthanasia is not a realistic option for the network suits. Instead, the show lurches on, directionless, able to string together a few jokes or smiles but with no other evidence of life and no hope for a cure. In its eighth season, The Office has become a zombie more fearful than any legless ghoul on The Walking Dead. It might be time to put it down.

Previously:
House of Lies: On Leveraging Horseshit
The British 1 Percent: On the (Very Soapy) Return of Downton Abbey

Filed Under: TV, How We'D Fix It, NBC, Sitcoms, The office