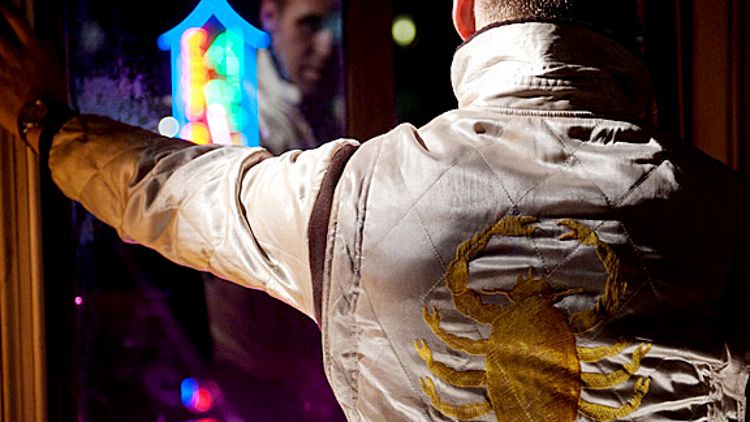 Drive, director Nicolas Winding Refn’s hyperviolent ode to fast cars and pink fonts, is crammed with memorable visual details: a tense, gloved hand on a steering wheel, Carey Mulligan’s doe-eyed gaze, Ryan Gosling popping skulls like Birdman pops bottles. But the most iconic image of the film is the white satin jacket worn by Gosling’s character, Driver. Pitched perfectly between immaculate throwback and haute hipster, the ever-present jacket — which becomes ever more bloody as the film progresses — was the work of costume designer Erin Benach, a veteran of films including Half Nelson, Blue Valentine, and even a few not starring Ryan Gosling. We spoke with her about her greatest creation.

Ryan seems like the sort of actor who would involve himself in the costume process. True?
He’s definitely special and awesome and unique. It’s a real pleasure to work with him because together we can come at the costumes with stories behind everything. So we’re able to describe why we’re choosing this jacket or these gloves. We discuss everything beforehand.

Perfect segué! What was the origin of the jacket?
Ryan had been really inspired by these 1950s Korean souvenir jackets. He had bought one on his own and was wearing it around. So we started to think, wow, that might be really cool. But the style and shape of them was definitely very fifties and slouchy. We felt like Driver was really buttoned-up, clean and streamlined and we didn’t want there to be much billowiness to him. So we built it piece by piece. We knew the collar had to be able to pop up, we wanted the knit around the wrists and waist to be 100 percent wool as opposed to stretchy nylon. We wanted every element to be perfect. We went through 15 or 20 iterations until we got it right. Which was down to the wire — about an hour before shooting!

Was there ever any debate about changing the color? White satin is definitely a bold choice for a tightly-wound killing machine.
White satin was our first choice. But our Director of Photography, Newton Thomas Sigel was kind of alarmed about it. Imagine a photographer’s face: “Wait, every shot of our main actor is going to be in a bright white jacket?” His fear was it would blow out the image. We worked with him to try and find different satins with sheens that would bounce less. Or bounce more. There was a moment where we got a phone call saying we had to change it but by the next morning when we returned the call we were like, “Nope, it’s white. We’ll make it work.”

The jacket has a large image of a scorpion on the back — which echoes a line of dialogue late in the movie. Which came first?
I’m going to leave that unanswered, actually. But the logo itself is a reference to one of the first music videos ever made by Kenneth Anger called Scorpio Rising. It was totally a Nicolas and Ryan thing, paying homage to a time of avant garde filmmaking.

As the film gets bloodier so does the jacket. Who is in charge of determining how much spatter would result from a shotgun to the head, say, versus a simple stabbing?
Oh, we have meetings in pre-production where I’ll sit with the SFX guys and Nicolas and we’ll talk about where the entry of bullets is going to happen, whether we’ll see the entry or just the aftermath. As far as the exact amount of blood? That happens more organically while we’re shooting.

Was it helpful to have a director who prefers to shoot chronologically? That way you can keep track of the story via the accumulating bloodstains?
Yeeeeeah. He shoots chronologically . . . ish. [Laughter] As a costume designer my mindset is always to prepare for the worst and have as many multiples as possible. If they start discussing an unplanned blood scene I definitely let the assistant director know I’ve only got five of these things left so that’s what we’ve got to work with!

How many jackets were there in total?
I think it was 13.

Have you been inundated with requests for copies of the jacket now that the film is out?
I definitely have been. And you just might be able to find them online soon.

Finally, I have to ask if it made your job easier or harder to work with an opinionated director who also happens to be color-blind.
Ha. It’s amazing. Nicolas definitely reacts to certain things differently because of his color-blindness. But look, he certainly knows when he likes something. For example, he likes the color red. You can see that!