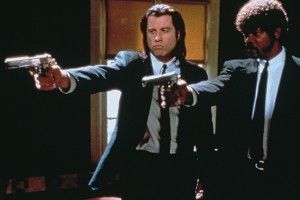 The new issue of Vanity Fair has an oral history of Pulp Fiction, but if you hate physical media and also paying money for things, don’t worry: There are some juicy excerpts available on the magazine’s website right now. As for why Vanity Fair decided to do the oral history at this present time, 19 years after the movie, I figure it was either to coincide with Quentin Tarantino’s Django Unchained’s Oscar run, to beat the the rush on the 20th anniversary, or to free us from the tyranny of the “only years ending in ‘5’ or ‘0’ are worth commemoration” fallacy. And I choose to believe it’s the latter one, and I applaud VF for their courageous pioneerism on this very important issue. On to the anecdotes!

As you might recall, John Travolta wasn’t exactly what was hot in the streets back then. So: “Harvey Weinstein was dead-set against giving the role of Vincent Vega to John Travolta … ‘One of the actors I had on the list was John Travolta,’ says Tarantino. ‘And it came back: ‘The entire list is approved … except for John Travolta.’ So I got together with Harvey, and he’s like, ‘I can get Daniel Day-Lewis, Sean Penn, William Hurt.'” By then, according to [Travolta’s agent Mike] Simpson, “Daniel Day-Lewis and Bruce Willis, who was the biggest star in Hollywood, had both gotten their hands on the script and wanted to play Vincent Vega.” Willis, of course, went on to play Butch in the movie, and Travolta did crush it as Vega. But it’s nice to daydream about the alternate movie world where Day-Lewis does land the flick. The ever proper, now straight-up presidential-y DDL? Shooting people and winning vintage dance contests and rambling about fast food? Then again, production probably would’ve been stalled, as Day-Lewis would’ve insisted he prep for the movie by actually moving to Amsterdam and doing a bunch of heroin.

Other tidbits of note: Travolta would have given Butch to Matt Dillon, but Dillon, according to Simpson, “read it and said, ‘I love it. Let me sleep on it.’ Quentin then called me and said, ‘He’s out. If he can’t tell me face-to-face that he wants to be in the movie — after he read the script — he’s out.'” And Jules Winnfield almost went to … Paul Calderon?! Luckily, Samuel L. Jackson made a pit stop for grub before coming in to the audition. Explain’s Miramax’s Richard Gladstein: “In comes Sam with a burger in his hand and a drink in the other hand … Me and Quentin … were sitting on the couch, and he walked in and just started sipping that shake and biting that burger and looking at all of us. I was scared shitless.” Oh, and John Travolta says he won a Twist contest when he was 8? Anyway, it’s good stuff, check it out.