Should You See It? A Curious Consumer’s Decision-Making Guide to Lincoln 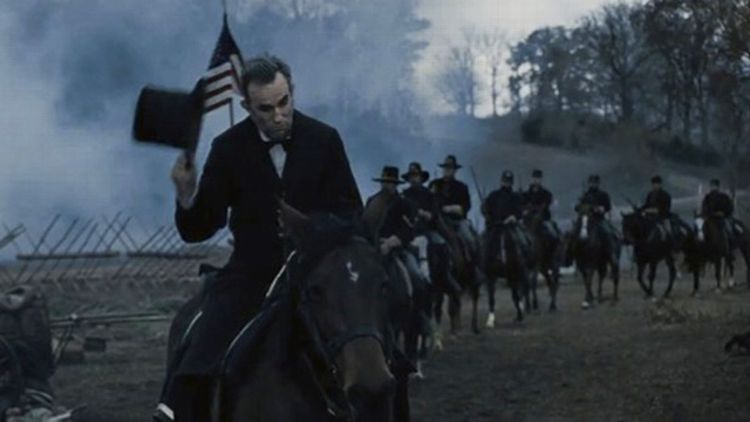 Some might say that we have been a little obsessed with Lincoln, Steven Spielberg’s latest cinematic jaunt into American history, for months now. Before we had glimpsed even a millisecond of actual footage from the film, we were convinced that the very first promotional image had begun and ended the Oscar race with the terrifying efficacy of a bloody head on a pike outside a cannibal village, warning us to proceed no deeper into the jungle lest an angry tribe of awards consultants eat our still-pulsing hearts whole and work off the meal by jumping rope with our glistening entrails. Then came our possibly reactionary concerns about the official poster, followed closely by a totally reasonable, frame-by-frame dissection of the trailer and its inevitable impact on Academy voters. Doubts crept in. Beards were feared. But then Abraham Lincoln himself, perhaps sensing, as great leaders do, that it was time to end our petty squabbling about trivial matters, brought down a thundering fist and bellowed, “I am the President of the United States of America, clothed in immense power, and I am tired of you nattering idiots carrying on about a movie you have not seen!”

So that was that. There was nothing left to do but wait. And then, finally, Lincoln debuted on a handful of screens in Los Angeles, and we were there to extinguish our ignorance. Today, it opens wider, and so it’s time to answer, once and for all, the only remaining question that truly matters: Should you see it? Read on, and let’s try to make your ticket-buying decision a well-informed one. We wouldn’t want to turn you loose on the Fandangos without all the information you require.

Are you a Civil War buff?

This seems as good a place to start as any. Here you sit, museum-authenticated Confederacy saber in your lap, taking a break from Pricelining your next trip to Disneyland Gettysburg so that you can get a better spot at the Appomattox Courthouse Electrical Surrender Parade than you had last year, when that gang of inconsiderate Lincoln cosplayers ruined your view with the top hats they refused to remove, no matter how many times you beseeched them to do so in the name of unity.

You’ve already made up your mind. You’re probably already tenting outside your local multiplex with your entire battalion of reenactors. All you’re doing is looking for new reasons to get excited. Well: Get excited, Jeremiah. This movie is for you.

SEE IT. But be forewarned, those battlefield scenes from the commercials are pretty brief. This isn’t Bayonetting Private Ryan.

Are you not very interested in American history at all?

Part of us wants to say, Get interested, history is important. But another part of us wants to say, Stop telling people what to do, you pushy asshole. It’s a movie. Some people aren’t looking for a history lesson, even a very entertaining one. Don’t make someone sit through two-plus hours of angry congressmen shouting at each other if that’s not their thing. They might be happier in the next theater over, watching a hilariously bewigged Javier Bardem playing the most menacing game of Tune In Tokyo ever with James Bond’s nipples.

SKIP IT. But eat your vegetables. And take it easy on the man-buttons.

This movie was based in part on your bestselling book Team of Rivals. Spielberg occasionally called to ask you what Thaddeus Stevens might eat for breakfast on an overcast Tuesday when he wasn’t in the mood for oatmeal. For four long years, Daniel Day-Lewis, convinced that you actually used to be Lincoln’s mistress, made regular overtures requesting to come over and “drink up every delicious drop of your all-knowing essence” as part of his prep work. He finally relented after you agreed to let him sleep at the foot of your bed for a week, though on more than one occasion you had to ask him to stop stealing hair from your brush.

You’ve already SEEN IT. You were at the premiere. Don’t be a name-dropper, coming in here with your stories about “my pal Steven” and “the DDL.”

Are you exhausted by politics?

We’re all exhausted by politics. You’re not unique here. The next election cycle started six hours ago. We better turn on CNN to see in what direction the Undecided Voters are twisting their DecisionKnobs while Wolf Blitzer scrawls “SIRI FIND OHIO” on the SuperWall with his finger.

You know what? SEE IT. We know how everything turns out, it’s not like you need to refresh FiveThirtyEight every hour to see what Nate Silver’s nowcast says about the 13th Amendment’s chances of passage. Spoiler alert: It passed, no matter what Karl Rove thinks about the early projections.

Are you aching for a positive portrayal of the Republican Party in the media?

Great news! The Republicans are the good guys!

Are you a trendy secessionist?

SEE IT. And maybe RECONSIDER that as a political strategy. It DID NOT TURN OUT WELL FOR ANYBODY.

Would you feel weird if you saw the movie before President Obama did?

That’s certainly a strange thing to be concerned about. I don’t even know why anyone would ask that question, but there it is.

Go ahead and SEE IT. Everyone involved with the movie went over to a White House screening last night. The DDL did his “clothed in immense power” speech while wrapped in drapes in the Lincoln Bedroom; it totally killed.

Have you lost faith in recent-vintage Steven Spielberg?

It’s a reasonable way to feel, given that the director’s last three movies were the franchise-destroying Indiana Jones and the Kingdom of the Stupid Thing He Couldn’t Talk Lucas Out Of, the weird 3-D foray into dead-eyed Zemeckian motion capture The Adventures of Tintin, and the sap-drenched War Horse. But before that was Munich, and before that was War of the Worlds, which was worth the price of admission just for the nightmare-populating images of Tom Cruise trying to halt an alien apocalypse by fighting his way out of a giant extraterrestrial vagina. Let’s not begrudge the man that three-movie mini-slump. If you ever had faith in him, this is not the time to jump ship.

Are you exhausted by being blown away by Daniel Day-Lewis every time he deigns to make a movie?

An interesting philosophical question: Can there be a monotony in genius? Can we be inured to relentless excellence, bored of the sublime?

Eh, not really. SEE IT. You’ll want to know what he’s talking about in his acceptance speech, even though you’ll be distracted by his feather earring and the fact he’s not actually 7 feet tall.

Do you wish Sally Field were in more things?

Maybe you do, maybe you don’t, but she got at least two different highlights for her Oscar reel out of this gig.

Would you like to see a movie with every actor in it?

Think of an actor. Any good actor. An Oscar-winning or an Oscar-nominated actor. A character actor with a memorable face. Yeah, he’s in it. So is she. Him too. If you’ve got a free day or two to kill, scroll down the IMDb page and have a look at all the names.

When Spielberg began casting Lincoln, he took out an ad in Variety that read thusly:

Dear Hollywood: I have work for you. Send me all the actors immediately. Love, Steven

Try to name someone who’s not in this. You can’t. Trust me, that one guy you think wasn’t in it? He was in it, stuck polishing a gavel in the back row of Congress, or maybe getting trampled by a horse, or being Kevin Kline in a role we have absolutely no recollection of. There are five credited “Woman Shouter” roles in this movie, and all of them have won multiple Tonys, probably.

Are you a Janusz Kaminski–head?

OH MY GOD, you have never seen so many beautifully lit Congressional chambers in your entire fucking life.

SEE it. Then go home, COVER YOUR WINDOWS in a gauzy material, and shine some giant lights through them all night long in a futile attempt to re-create atmospheric magic.

Have you ever Googled the phrase “Tommy Lee Jones worst wig ever”?

Here’s a dirty little secret: Lincoln’s beard is, at best, the 10th- or 15th-best beard in the movie. There’s a fuzzy embarrassment of elaborate beard-riches. The mid-19th century was a thrilling time for facial hair.

SEE IT while absently TWISTING YOUR OWN WHISKERS in AMAZEMENT.

How about craggy faces?

Let’s put it this way: If you were to select any of Lincoln‘s more mature actors at random and pour a single drop of syrup into the furrow of his brow, that drop would not reach the tip of his chin until the cessation of hostilities in the Second Civil War of 2058.

Crags galore, BITCHES. It’s like these faces belong on a wall of an English pub’s FAVORITE DEAD PATRONS.

Are you into tall hats and long coats?

The hats are so tall that cherubs host brunch on their tops, the coats so long the Devil himself sews their frayed hems with hair plucked from his goat-legs.

Ever seen a wheelbarrow full of severed limbs and then puked your guts out?

And soon SO WILL YOU.

Was that a spoiler?

Yeah, what the hell?

You’ll never know unless you SEE IT.