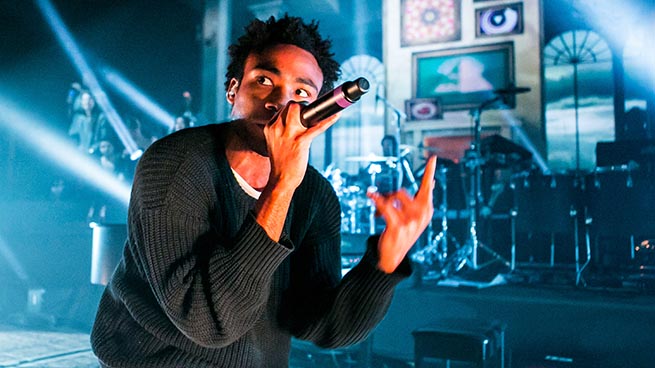 I’m riding the last leg of a 10-hour, mental-stability-threatening apartment move in New York City. I’m cranky and exhausted and need to charge up my phone. I’ve kept it juiced most of the day, but something in me wants to get from 97 percent to the full 100. Right as my wife drops me at the subway by the U-Haul spot, I max out.

Walking into the Hammerstein Ballroom in midtown Manhattan, I immediately get where the charging impulse came from. While a warm-up DJ spins anthem after anthem, everyone’s using the Deep Web Tour app — which until now simply said PLEASE WAIT FOR INSTRUCTIONS — to deliver tweet-style messages and dick-shaped doodles to a stage-size screen. The content, appearing in a rapid-fire stream, is all over the place: “i lost my v card this week.” “i hope Lena Dunham plays tonight.” “I low key farted just now.” “snape kills dumbledor.” “white kids gonna white.” A few months after Donald Glover started talking about how lonely we all are despite technology’s connective possibilities, a bunch of strangers are spending time on one big screen instead of 2,500 small ones.

In a recent Complex cover story (appropriately published online with a slew of bells and whistles), Donald griped that no one uses the Internet “to make real stuff happen.” Leading up to Because the Internet — the sophomore album that wound up being Childish Gambino’s most consistent, exciting, and replayable release yet — Donald brought outdoor listening parties to Los Angeles, Philadelphia, Toronto, and New York, announcing the events on Twitter hours beforehand. The Deep Web Tour is the next step: an IRL experience to supplement the record you probably downloaded from The Pirate Bay.

The app-based prologue ends after an hour and the Gambino portion of the evening starts. The piercing gargle of a dial-up Internet connection accompanies an animated sequence that looks like a ride through a computer’s brain. A voice reminiscent of a certain sexy operating system from Spike Jonze’s Her calls out to the crowd.

The tweet screen morphs into a luxe library-slash-solarium scene, and Donald Glover, wearing a chunky black sweater and patterned short shorts, sits down to play some moody piano. “Crawl” kicks in, and we’re on to the first few songs of Because the Internet. (Something the unimpressed critics neglected to highlight when the album dropped in December: its capable adventurousness is gripping. The first few tracks alone whiz us through synth-trap, a slow-jazz meltdown, some 808s-indebted cello, a Little Mermaid sample, and a feature where Chance the Rapper doesn’t bother rapping.) Donald and his four-piece band have shuffled the record’s 19 tracks and will perform most of them in one long go.

The CGI backdrop isn’t as attention-stealing as the pre-show party, but it’s definitely something. At times it starts to look like a standard banner that a less ambitious/wealthy artist would tote around on tour — until you notice the clouds drifting behind the windowpanes. The stage is set with a couple couches populated by young people milling through. There are chandeliers and lamps and a globe, the wooden type that sometimes houses a secret stash of single-malt. When my mind wanders to the fact that Donald Glover was a key player on the wonderful Community for 4.4 seasons, it feels a little like getting starstruck. That dissipates quickly, for a few reasons. First, because something about this tour is like a casual hangout with Donald. (Blame it on the couches?) Second, Donald is too musically on-point to let us think about a sitcom. It’s easy to take a quality hip-hop show for granted, but sit and examine what a performative feat it is to spit five times as much content as any big rock or pop act and just let it marinate. Lastly, Donald’s a really goofy, enthusiastic dancer.

After years of being flustered by the iPhone-documenting faithful, I find myself taking photos and videos to actually show my friends later. Tonight has a Watch the Throne Tour vibe, the kind of atmosphere that reminds me why I fell in love with concerts in the first place. During an extended jam of the fragile, Frank Ocean–ish “Urn,” Donald stands just behind a silky screen that has appeared at the front of the stage. Lit by a pair of golden beams, he reaches for a digital blue vapor puff shimmering above him. The app sparks back to life for a mid-song poll:

“Power is what allows you to do whatever you want,” Donald told the Village Voice three years ago, just as he was launching IAMDONALD, a tour that combined stand-up, pre-recorded sketches, and rap. “If Will Smith wanted to play Hitler, they’d make that movie. That’s power. I want to do a Nazi movie. I want Jay Z and Eminem to rap on the same track with me. I’m in it for the power.” Those superstar collaborations haven’t materialized (yet?), but as far as making what Kanye calls “a higher level of product,” it feels like Donald’s competing. It’s not as basic as an app or a fancy screen, either. Because the Internet was preceded by a pensive, purposefully weird short film and accompanied by a 76-page interactive screenplay. Like Donald’s résumé bullets — actor, 30 Rock writer, viral sketch troupe member, future FX TV show guy — the album’s prongs aren’t one-off novelties. They’re substantial stand-alones, with an option to assemble them into something larger. Donald’s restlessness is nothing new, but the Deep Web Tour is a high point for displaying the magic his dabbling can amount to.

Once the live celebration of Because the Internet wraps, the screen becomes a forest bonfire, initiating a breathless montage of Camp tracks and older cuts (“Freaks and Geeks,” the Adele-sampling “Do Ya Like,” “One Up,” from the criminally under-discussed Royalty.) Donald raps over tweaked or totally rearranged versions of the original beats, a move that always feels like a bold refusal to pander. After an extended session of murky freestyling paired with pleasant riffing from the band, the show’s over.

Walking out, instead of the usual enthusiasms about how much ass the show kicked, everyone seems to be going into recovery mode. “What’re you at? I’ve only got 12 percent.” “Seventeen for me.” One hero/weirdo boasts 44 percent. I’m dying to cruise Twitter and Instagram for immediate reactions, but my phone’s too close to zero. I decide to leave it alone for a while.

Filed Under: We Went there, Childish Gambino, donald glover, deep web tour, because the internet, Music