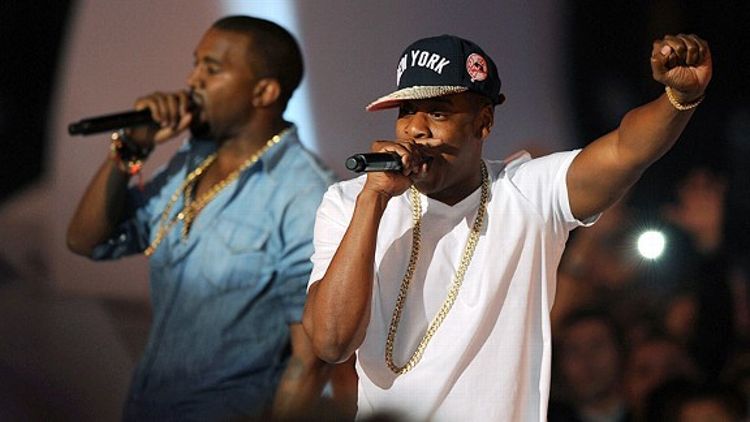 Last night’s Watch the Throne show at Madison Square Garden has only started five seconds ago and already the fifteen-year old from Long Island behind me is straddling two rows of seats and throwing both middle fingers in the air. In her defense, Jay-Z and Kanye West did just come out to “H.A.M.”

There was no opening act to get the crowd riled up this quickly. One would have been unnecessary. The section where I’m seated — up front near the player’s tunnel, where celebrities are being ushered through to the VIP area — has an odd vibe. The crowd is a mix of cool-looking black dudes, tweens dressed like Justin Bieber, those tweens’ parents (some admirably game, some a touch overeager), turtleneck-wearing seventy-year-old guys who presumably hold executive positions at LiveNation, and women who, at least to my untrained eyes, appear to be models.

Whenever the row of girls in front of me stands up, shrieking, with their camera phones out, it means a new celebrity has arrived. Trey Songz appears. Kevin Liles follows, to less fanfare. Russell Simmons marches past, preceded by an entourage member carrying a gallon of Tropicana orange juice with, like, eight plastic cups stacked on top of the lid. There’s an extended scrum, and the woman in front of me explains that it’s “Puffy. Or whatever they’re calling him now.” Diddy comes out in a quasi-Drive-ish jacket, his rumored lady friend Cassie a few bodyguards back (half her head is still shaved, in case you were wondering). Lukas Haas lopes out, daps up a seventeen-year-old, and then his buddy Leonardo DiCaprio follows behind (Why do I know that Lukas Hass is friends with Leonardo Dicaprio? Why do I know who Lukas Haas is?) Even in his seventh-grade attire — baseball cap, puffy winter jacket — Leo still makes ladies screech his name.

All that general activity means that by the time Kanye and Jay-Z actually show up, along with the nutso opera intro for “H.A.M.,” half of my section is psyched enough to punch an ostrich in the face. The two superstars appear on opposite sides of the arena, both excellently attired in Watch the Throne tour T-shirts; Jay has paired his with zippered black pants, Kanye with a leather skirt and man-leggings combination. They each get a giant, ascending cube to stunt on, along with Star Trek-alien-invasion-beam-up spot lights. Jay is smiley, almost relaxed. Kanye is jutting his chin out as far as it goes.

They come together on the main stage for “Otis,” with a giant American flag as their backdrop, and then it’s a breezy, pyrotechnics-enhanced sprint through their crazy-packed back catalogs. Jay does “Where I’m From,” and as always it’s a trip to hear his vintage, untouchable flow. Kanye counters with “Can’t Tell Me Nothing,” and temporarily regains the upper hand. ‘Ye’s not really interested in showing anyone up, though: “I came to New York with some beats in my pockets, hoping to meet this man,” he says at one point. “He’s my idol. Now I’m on a mothafuckin’ stage with him. That lets you know dreams do come true.”

Things stay buddy-buddy for “New Day,” with the pair rapping to their unborn (/imminent!) children while seated on the stage steps. Jay removes his Yankees snapback during his verse, and pensively rests his hand on his head. After, he says, “Thanks for allowing us to share. Thanks for that moment.” If that sounds corny, you’re a jerk. They stay sitting for “Hard Knock Life,” a nod to the track’s classic stoop-hang video. And now it’s time for the Kanye-iest part of the show.

All alone on the far-side cube, drenched in red lights, Kanye does “Runaway.” It takes a minute to take in his new outfit: is that the denim jacket tied around his waist? No, it’s a kilt! Flawless, Kanye. Flawless. His traditional post-song Auto-Tune ramble is kept to a minimum, but it still hits hard: “If you love someone tonight, hold on real tiiight. If I told you how I didn’t like your shoes, don’t listen to me, cause I’m an asshooole.” When the lights turn blue for “Stronger,” Kanye — captured perfectly in a JumboTron close-up — makes the meanest face he can. Then come more hits: “Dirt Off Your Shoulder,” “Good Life,” “99 Problems,” “Touch the Sky.”

And somehow, all of that feels like preamble for the big finale. Will Ferrell makes it clear that “we’re going to skate to one song and one song only,” the skittery “Niggas in Paris” beat drops, and the building goes nuts (that fifteen-year-old Long Islander looks about ready to light herself on fire). Jay and ‘Ye run through their verses with all the authority in their possession (“What’s that jacket, Margiela?”) — and then immediately run the track back. Kanye takesthe last word: “Huh? Huh? Huh?”

They walk off — and then come right back, bringing “Paris” with them. Someone near me gets so excited he tosses a wad of cash in the air. Jay-Z says, “Let’s go off-script. It’s so loud in here, let’s just freestyle some shit.” The DJ skips around a prime late-nineties Hova medley, and Jay doesn’t miss a beat. Then comes “Get ‘Em High,” and it’s adorable: Jay tries to help out, but Kanye can’t remember his lines (“Uh, I forgot that shit.”) Things seem genuinely, uncalculatedly loose. The DJ is at least pretending he doesn’t know what to play next, before fumbling around to “Why I Love You. “I see everyone looking nervous over there,” says Jay. “It’s okay. MSG got strict overtime rules, but fuck it. We ain’t got nowhere else to be.” I’ve heard him use that same line before at Madison Square Garden, but it’s still pretty great.

Filed Under: Watch the Throne

See all Watch the Throne