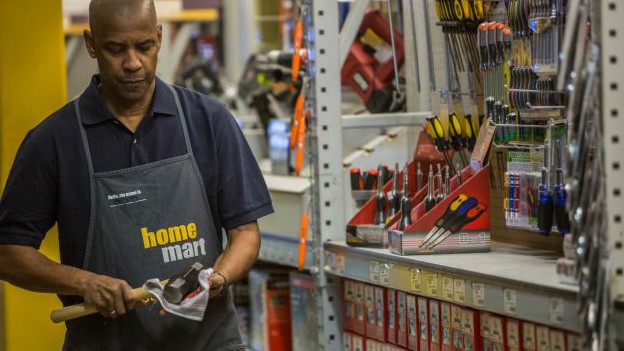 When Hollywood is in trouble, there is only one man it can turn to. When indifferent audiences threaten to drag down box office receipts, one man can set it right. No matter how distracted we are by tweets, Tinder, Derek Jeter’s last game, or just catching up on the ol’ DVR, he will get us off our carb-loading asses and into a movie theater. You know whom I’m talking about: Denzel. It’s not often you quote Shakespeare while writing about the weekend box office, but when speaking of Denzel Washington, Julius Caesar’s famous boast comes to mind: “I am constant as the morning star, of whose true fix’d and resting quality there is no fellow in the firmament.” The difference is, Julius Caesar got stabbed in the back after saying that; anyone tries that on Denzel, he’ll send them to the undiscovered country via a wine opener to the throat.

So yeah, it was a good weekend at the box office. ’Cause Denzel Washington said so. Antoine Fuqua’s The Equalizer caught us in its barb-wired choke chain, and The Boxtrolls charmed the PG crowd. Overall, the top 10 films grossed $97.2 million this weekend, up 6 percent compared with last year, whittling Hollywood’s 2014-versus-2013 box office deficit to 5.3 percent, mostly thanks to the equalizing affects of Denzel and his Home Depot house of repurposed horrors. But there was plenty of winning to spread around. Sure, a smatter of losing, too, but mostly winning. Because that’s how Denzel rolls.

An action hero who wears New Balance and never fires a gun? Sure, he’s got that. An ’80s TV series best remembered these days for its cameo in The Wolf of Wall Street? Yeah, no problem. A less-than-fresh Tomatometer and a low-profile September release date? Please. This is Denzel Washington here. The Equalizer exceeded Sony’s intentionally modest expectations with a face-stomping $35 million opening on a $55 million budget. Shall we list the ways in which Denzel is righteous? It’s his third-best opening behind American Gangster and Safe House; it was the fourth-biggest September opening of all time (and best R-rated September opening); and now Denzel’s last 10 wide releases have all grossed more than $20 million. Profitable? Sony’s already talking sequel — if Denzel’s cool with it. Hell, The Equalizer opened at no. 1 in Russia even though the film boasts the most cartoonish villains from that country outside a Bond film.

And instead of a split billing, say with Russell Crowe on American Gangster, this film’s a Washingtonfest — “Denzel porn,” as Wesley Morris so aptly put it — so that $35 million, that’s pure Denzel money. No high-concept, world-ending villainy. No frenetic car chases or wuxia parkour pyrotechnics. Fuqua wisely gave us just Denzel, a shaved head, and two fists. We didn’t go to this movie for a deep character study, novel plot, or even current-event relevance. We went for Denzel Washington. Hollywood could be falling into the mouth of hell; the star system could implode like a gaseous red giant; TV might steal film’s cultural cachet. But Denzel is one star who remains constant. And he’s got some justice to dispense, so just fork over your money and go with it.

Again!? At least you can chalk it up to Denzel this time. A Walk Among the Tombstones grasped at straws with $4.2 million this weekend — dropping 67 percent in its second weekend, all the way to seventh place. With a mere $20 million at the domestic box office so far, you can kiss those franchise dreams good-bye, Universal. Meanwhile, Liam Neeson will just have to console himself by taking out the Euro-trash in Tak3n.1

Winner: The Children (and Their Desperate Parents)

Break out the nonalcoholic sparkling cider! The weekend’s other big winner was the youth of America. Last week’s champ The Maze Runner battled it out with animation company Laika’s The Boxtrolls for second and third place, respectively. The Maze Runner took in another $17.5 million for a not-so-shabby 46 percent drop from last weekend, while Boxtrolls was hot on its heels with a $17.2 million opening. Oregon-based Laika is on a stop-motion roll these days: Boxtrolls outpaced the company’s previous two winners, Coraline and ParaNorman. And the movie offerings will only get better for the wee ones with Alexander and the Horrible, Terrible, No Good, Very Bad Denzel2 and The Book of Life set to come out over the next two weekends. Meanwhile, Dolphin Tale 2 has stuck it out after an initially sluggish opening, banking another $4.8 million to stay in the top five, grossing $33.7 million. So it was a good weekend for parents to gain a 90-minute reprieve while movie magic babysat their kids.

Loser: The Sad Return of the Man-Walrus

Say what you will about sea-mammal suits stitched together from human flesh, but even as a curio they deserve better than this. Kevin Smith’s body-horror opus Tusk dropped like a dead fish its second weekend, with a per-theater average below $700 in 449 theaters. It’s now grossed a little more than $1.4 million, which puts it slightly above Smith’s equally insane Red State but not much else in his filmography.

Welsh coal miners and gay and lesbian rights activists from London couldn’t take down Margaret Thatcher in the 1980s, but they did find success at the indie box office this weekend. British period drama Pride grossed nearly $85,000 for a nice $14,132 per-theater average, thanks to its 93 percent Tomatometer rating and A grade at Cinemascore. Seriously, if you can’t tear up at the heartwarming thought of surly miners learning to embrace those activists, Denzel Washington has a nail gun he’d like to show you in Aisle 24.

The Denzel-Approved Top Five at the Box Office