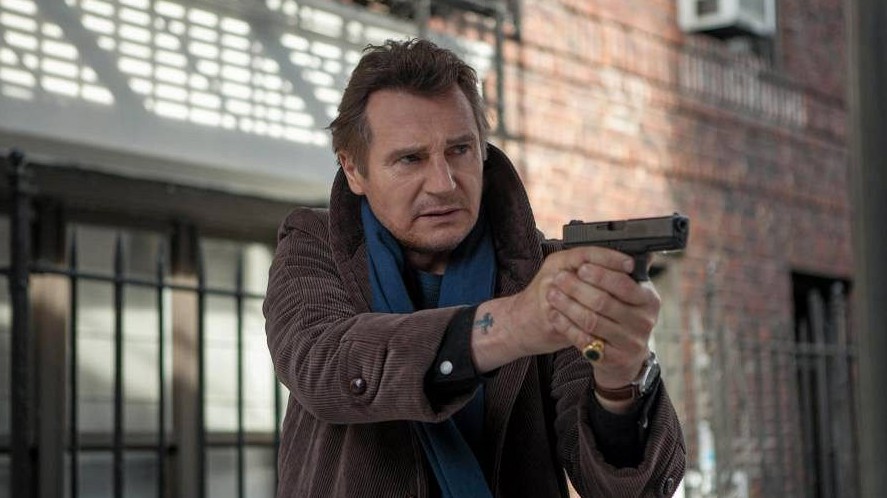 Hallelujah! After weeks picking through the movie cupboards looking for anything good and finding only a stale box of Frosted Guardians of the Galaxy, Hollywood coughed up a cornucopia of new releases this weekend. In fact, Tinseltown offered us a veritable cinematic smorgasbord to partake in: some man-meets-Walrus body horror, a new high-concept YA franchise, and the meat and potatoes of 21st-century-cinema Liam Neeson, the Thinking Man’s Ass-Kicker. And partake we did. 2014’s incessantly alarming decline at the box office was somewhat halted this weekend, as the overall box office jumped 25 percent over last year. The top 10 films made $91 million versus just less than $70 million last year. Suck on it, 2013! For the moment!

Of course, the offerings weren’t the top-shelf stuff yet: We have to get deeper into the fall season for films with that crisp, prestige aftertaste. But young adults battled for their lives in cruel blood sport and Liam Neeson growled brusquely at baddies into a phone this weekend — what more do you want? Not everyone came out on top (we’re looking at you, Kevin Smith), but at least with this many horses in the race, it’s a little more fun sorting the winners from the losers.

It’s official: YA fiction is the new comic books. If you are over 18, you might not have had any idea what The Maze Runner was or that it was coming out this weekend. The Maze Runner and Teen Wolf’s Dylan O’Brien didn’t care: The movie grossed $32.5 million domestic and an impressive $81 million worldwide. For a random weekend in September, that’s not just good, it’s great — and the relatively slim $34 million budget makes it all the sweeter. Do you smell franchise? Fox definitely does; it already green-lighted the sequel for 2015. YA fiction has become the box office printing press of the moment for Hollywood, with Divergent and The Fault in Our Stars following in The Hunger Games’s formidable footsteps. Even the initially disappointing The Giver, based on Lois Lowry’s YA ur-text, has slowly scraped its way to $51 million worldwide. Coming-of-age tales have never been more lucrative.

It can’t be. It’s just not possible. Did Liam Neesons straight-up get his ass handed to him by Teen Wolf’s BFF? Sadly, yes, A Walk Among the Tombstones underperformed at $13.1 million, less than half of the $28.9 million opening Neeson beat out of us with Non-Stop in the doldrums of February. What has the world come to when stone-cold threats whispered by an Irish brogue aren’t worth $20 mil at least? Could we really be getting tired of watching Oskar Schindler pummel bad guys? I refuse to believe it. Honestly, on a $28 million budget, that opening isn’t horrible, and despite decent reviews, A Walk Among the Tombstones had an audience-limiting R rating to deal with. Still, next weekend Neeson will have to face off against Denzel Washington in The Equalizer. Will Denzel hand Neeson the remnants of his hindquarters? (Now there’s a cynical franchise mash-up I want to see. Denzel vs. Liam: Rise of the Ass-Kickers.) Who knows, but I have faith: Neeson shall rise again once more into the fray. Because who wants to live in a world without Liam Neeson pounding on anonymous Eurotrash villains? Only anonymous Eurotrash villains, that’s who.

Sadly, there was no man-walrus love to be had at the box office, as this weekend’s biggest loser was Kevin Smith’s bizarrely compelling Tusk. Not even Smith’s army of loyal Twitter/podcast followers could lift this admittedly insane film over $1 million, despite it playing on nearly 600 screens. What, you didn’t want to see Justin Long stuffed into a walrus suit sewn from human flesh while Johnny Depp affected a bizarre Quebecois accent? There’s no accounting for taste. The film didn’t even crack the top 10, but hey, it’s a vast improvement on Smith’s self-released Red State, whose lifetime gross still stands at an adorable $1.1 million. So … yay?

Walrus-induced body horror aside, it was a bright weekend for indie films. A slew of them flooded the art house, and Indiewire points out that five managed to crack an impressive $10,000 per-screen average over the weekend. The leader of the pack was Sundance’s Nick Cave pseudo-documentary 20,000 Days on Earth, with an impressive $26,900 per-screen average. Unfortunately, Mia Wasikowska’s Tracks didn’t stun as much as its vistas of Outback desert did: It debuted to an iffy $5,400 per-screen average. Even The Skeleton Twins kept up the momentum: The critical darling made $448,000 in 49 theaters, bringing its gross up to $950,000 — more than Tusk made on 600 screens. (Sorry, Kevin.) The Skeleton Twins will keep expanding to more theaters, while Bill Hader and Kristen Wiig will undoubtedly keep trekking to personally ask every man, woman, and child in America to see their film.

Unfortunately, director Shawn Levy couldn’t quite follow Serious Bill Hader’s act. Despite an impressive cast that includes Jason Bateman, Tina Fey, Jane Fonda, and Corey Stoll freed from his oppressive Strain wig, This Is Where I Leave You landed in third place with a modest $11.9 million opening. The film cost only $20 million, so it’s not an outright loser, but given the marketing spend, it definitely qualifies as a “soft” opening. What does “soft” mean in Hollywoodese, you ask? Something like, “Eh, not bad. But we kind of hoped we could fool some of the Night at the Museum crowd into checking this out, though we probably should’ve known better.”

The Mostly New Top Five! (i.e., no Guardians of the Galaxy this week)

2. A Walk Among the Tombstones (Universal/Cross Creek), $13.2 million

Filed Under: Box office, Movies, Liam Neeson, the maze runner, Tusk, the skeleton twins, a walk among the tombstones, this is where i leave you