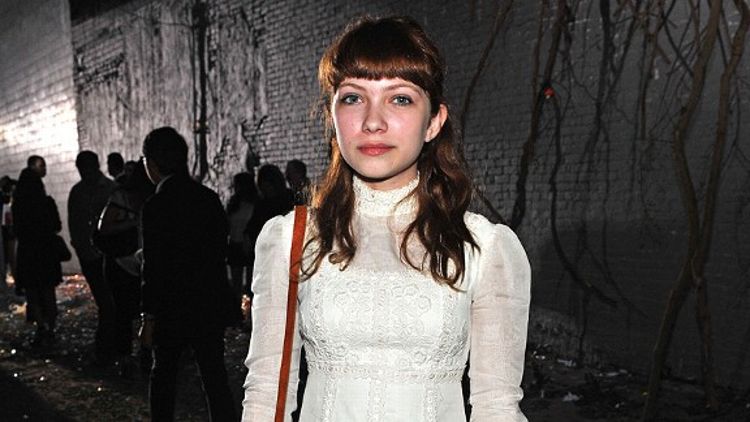 “Here you will find a timeless energy of beauty & thought. It touches everything! Strength, Confidence, & endurance. Get caught looking; exclusively for you!”
— Courtney Stodden’s webpage

“It’s really interesting how people, how the world, is trying to figure out what it means to have an extension of our identity, or a whole new identity, online.”
— Tavi Gevinson

Courtney Stodden is the child bride (17) of Doug Hutchinson (51). Quick quiz. Is Stodden:

The answer? Somewhere between C and D. Courtney Stodden is a 17-year-old aspiring pop star who can be generally described as “mature-looking.” She looks less like a teenage girl than a middle-aged divorcee attempting to look like a woman in her early 20s trying to look older. She recently married Hutchinson, a character actor who played “Horace Goodspeed” on Lost, “Loony Bin Jim” in Punisher: War Zone, and various small roles with names such as “Ifty,” “Baseline,” “Hoop,” “Obie,” and “Sproles.” Most notably to me he played “Tooms” in two terrifying episodes of The X-Files.

I don’t know what it is like to be a teenager now exactly, but I think that media freak-outs over pandemics of sluttiness and concerns about “premature sexual maturity” are generally fear-mongering, and that teenagers will continue to be as they always have been: a mix of awkward insecure nerds, cool burnouts, genuine weirdos, and some really good-looking rich popular kids who make all the other kids feel bad. Teenage girls are all prematurely sexualized — by puberty. What I’m interested in is how people react to the idea of being on camera constantly, how hard it is to reconcile naturalness with posing.

Courtney Stodden is fucking hilarious. What is so hilarious about her? The sexy “rawr” faces she constantly does. The sexy lip-licking. All of her sexy affectations that when taken together in full doses add up to being repulsive. Her spiritual kin is Paz de la Huerta, whose constant insistence on nudity is equally funny. Paz’s never-ending sexiness is camp. The performance of lustiness is camp. Strippers are camp. There is real sexuality, natural sexuality, and then there is traditional porn: artificial, extreme, fantastical. People are turned on precisely because it is so unnatural, because it involves sex that is hard to replicate, out of the realm of most humans’ reach. A lot of people also want to fuck cartoons.

Some women think they need to be a caricature of feminine sexuality because plenty of straight men are turned on by the most regular of feminine tropes: long hair, high heels, cleavage, makeup. Traits that are fetishized because they represent “sex.” Women are tricked equally by things like hair and height in men. These are not the only physical things that are sexually attractive, they are simply the lowest common denominator of traits that are. Men can’t fake hair or height quite as easily, but most of the female tropes are faked in some sense. They are embellishments. Easy to imitate, but almost impossible to do “naturally,” because they aren’t innate.

Or rather, if being yourself doesn’t work, and being somebody else does, is it worth it to pretend to be somebody else? You will get some baseline level of attention for affecting these traits, but you will also recognize that the attention has little or nothing to do with you. If being Dick Whitman doesn’t get you a great job or a hot wife, is it worth it to pretend to be Don Draper? The price is that you never get to be yourself again, but the payoff is greater than the one you might get for merely being yourself.

We wouldn’t care about Courtney Stodden if she were just a 17-year-old girl. People are interested in her because now she is a heavily makeup’ed, surgically altered, terrifying attention whore with a great awful song about jealous bitches hating on her.

And that interest is mostly car-wreck neck-swerving. Who is this hilarious person? Does she know how ridiculous she seems?

Can a person really blame all outside criticism on jealousy if what she is really perceiving is vicarious embarrassment? Stodden is like Anna Nicole Smith, Pamela Anderson, or Jayne Mansfield: the cartoonish aspects of female sexuality exaggerated so far they become completely grotesque. Yet Doug Hutchinson, the actor, acts like he totally scored. According to pornography, she is exactly what every straight man wants: a hypersexual nymphet.

What you have here is two people giving up everything that is good and holy in this world in pursuit of a commonly shared goal: fame. To achieve fame (and its brethren: riches) they are exploiting a relationship whose entire function is novelty: the age disparity and Doug’s C-list cred. They’re simultaneously promoting all the worst stereotypes about Los Angeles: youth culture, superficiality, famewhoring. Are we being too cynical about this? Do Stodden and Hutchinson genuinely love each other? What the fuck do I know?

Meanwhile Tavi Gevinson, the 15-year-old fashion blogger and Internet sweetheart/occasional lightning rod, has launched her new venture Rookie, of which she is the editor-in-chief. Tavi navigates all the big modern issues that fascinate her — things like public selves, private sexualities, teenage girlhood, the Internet, and peer group socialization — with such keen insight and self-awareness it’s frankly astonishing. She talks about how she feels about being marketed to as a teenager. The need to express yourself through your appearance and resentment of the (nearly universal teenage) desire to fit in.

Rookie is terrific, an updated Internet take on Sassy. The intersection between feminism and selling lip gloss is still tetchy at best, but Gevinson gets that these issues are complex and ever-evolving (and that blogs don’t run on air). Rookie aims to make teenage girls happier, less insecure, more convinced they are already cool. Certainly it attempts to provide some blueprints toward achieving coolness that it could be argued are just as superficially prescriptive as Seventeen‘s, but the written content, with features like famous adult hipsters giving advice on how to survive high school, is excellent.

Maybe this is something that just comes up every autumn but the tendency to think back rosily on childhood and teenagerdom is a direct function of not being a child or teenager. Even as Rookie finds way to make high school more palatable for outcasts, it acknowledges that the rudimentary social system is unlikely to change to make intelligent teen outcasts as popular as jocks and cheerleaders.

But if it’s a given that you will feel misunderstood in high school, the Internet provides endless opportunities to find geographically distant people who might be able to better understand you. Places to be validated as knowledgeable, attractive, artistic, cool, whatever it is you find lacking in your experience of reality. Young people are going through their mirror stage on Facebook, and bending the mirror to reflect what they’d most like to see.

If fashion and media tend to overly glamorize youthful sexuality and leisure, it’s important to be reminded firsthand by actual and former teenagers that youthful sexuality is often an ugly, fumbling disaster, and how much of that leisure time is occupied by homework. And that while there are occasional magic moments, real life is not like a movie, a TV show, or a fashion editorial. There is no way to avoid doing things for the first time, no way to avoid making lots of horrible first-timer mistakes. Internet personas, like star images, provide the illusion of control over one’s professional and private life.

Which is why it’s funny not only to picture Courtney Stodden spreading frosting on her rilly tight bod while she reads the Bible, but also to think about her sitting in front of her computer and tweeting about it. When I read Tavi being so intelligent about teen social orders and feminism and fashion I can’t help but project my own teenage self and imagine her being bored during assemblies and antsy-melancholy on Sunday nights. The Internet assists the voyeuristic desire we have to observe other people, to imagine other lives, even if those people are imagining their lives as well.