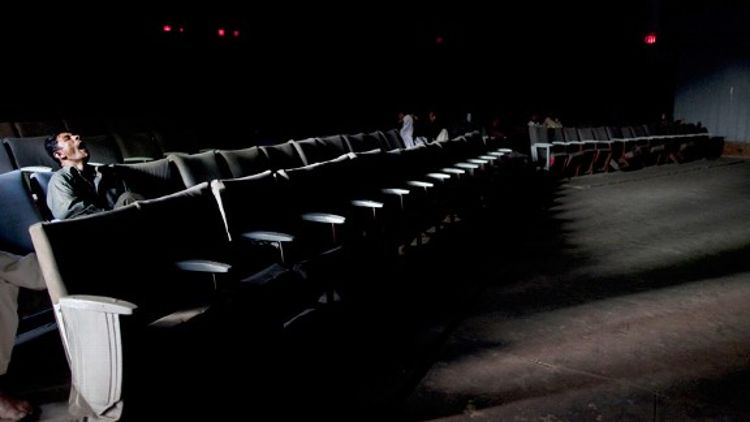 I produce movies for a living, which used to be the best job in the history of jobs. Not the actual “making them” part, but more importantly the “talking about them” part. Everywhere I went, I was the belle of the ball. I’d go to a benefit for cancer research and be surrounded by the smartest doctors in the world; once word got out about my occupation, I’d be inundated with fawning questions — “What’s Julia Roberts like?” “Is your life like Entourage?” “Is that your real hair?” (For those keeping score at home, the answers are “smart and rich,” “no,” and “yes.”) Everyone told me about the last great film they’d seen, and like any good producer I’d immediately take credit for their wonderful experience. It didn’t matter if I’d actually been a part of the film or had just merely seen it, I shared in the acclaim because I was a card-carrying member of that small and illustrious club. It was a glorious time, and I reveled in every minute of it.

But now the tide has turned. It’s not only turned, but the waves are huge and they’re crashing down directly on top of me. People don’t seem to like movies anymore. Sure, there’s the occasional smart film that audiences embrace whether they actually enjoyed it or not. But on the whole, people now have a new favorite pastime — bashing Hollywood. We’re an easy target, and it’s open season everywhere.

Even though I try not to leave my apartment anymore, I still occasionally end up at some event or another, and immediately I’m cornered like some dangerous animal. The questions come rapid-fire, and they’re always variations on the same themes:

“Why are there so many remakes of other movies?”

“Did we really need a sequel to that last sequel?”

“Why is everything now based on a game/comic book/tv show? How come nobody has any original ideas anymore?”

“Why don’t they make movies for grownups?”

And my personal favorite:

“Why do movies suck?”

As a qualified professional, I’m here to answer that question. If only I had some clue what the answer was. There are some mysteries that simply can’t be explained.

Here’s an idea for a movie: Two friends, fed up with all the emotional baggage that comes with relationships, decide to simply have sex with each other without any commitment or feelings. Initially thrilled with their progressive idea, they end up falling for each other anyway. The first known film was made 123 years ago. So, why, you might ask, did nobody come up with this idea before? And why were two films with literally the exact same premise — No Strings Attached and Friends With Benefits — released within six months of each other? Again, I have no idea. But good questions.

Yes, there’s an upcoming movie based on the board game Battleship. And others on the horizon called Candyland and Monopoly. We’ll probably see a Smurfs Go To Baghdad and a The Fast & the Furious: Iowa. But let’s bear a few things in mind: If I had said to you a while back that they were going to make a movie about a guy who created a website and may or may not have screwed his buddies along the way, you would have rolled your eyes at how boring it sounded. Yet The Social Network was fascinating in every aspect. I read the book Moneyball and knew two things for sure: It was a great read for any diehard sports fan, and there was no way it could ever be a movie. Armed with my razor-sharp producorial instincts, I watched in horror as the trailer for the film starring Brad Pitt came out — and had to admit that it looked riveting. A whole host of people deserve a ton of credit for ignoring conventional wisdom and thinking to themselves, “Hey, this would make a really great movie!”

And don’t even think of blaming the big bad studios. Yes, they spent an obscene amount of money on Green Lantern and Green Hornet, but they also gave us Bridesmaids, Jane Eyre, and the last Harry Potter. Bad movies are not the sole domain of the studios — I invite any of you to go to your local film festival and sit through truly independent films made for microbudgets. No interference from the “corporate suits”, no sacrificing of art for commerce, and — nine times out of ten — no redeeming quality whatsoever. You can make just as bad an original film for no money as Paramount can for $100 million — I should know, I’ve done it. Having a bunch of characters talk about their feelings for three hours might not be based on a video game or comic book, but there’s probably a very good reason for that.

A little while back I got my hands on a great script — a totally original story with compelling characters, sharp humor, and a profoundly emotional core. We brought on a tremendous director and a dream cast. As a producer, you fantasize about these scenarios, where everything comes together in the best possible way. It’s like winning the film lottery and it’s a very, very rare occurrence. I implore all of you to see the film when it comes out early next year, as a lot of pedigreed people poured their souls into this one and the fruits of their labor should be enjoyed by as wide an audience as possible.

And just to forewarn you: the movie sucks.

Rick Schwartz is an independent producer who lives in New York City. His credits include The Others, The Departed and Black Swan. He’d much rather be playing shortstop for the Mets.