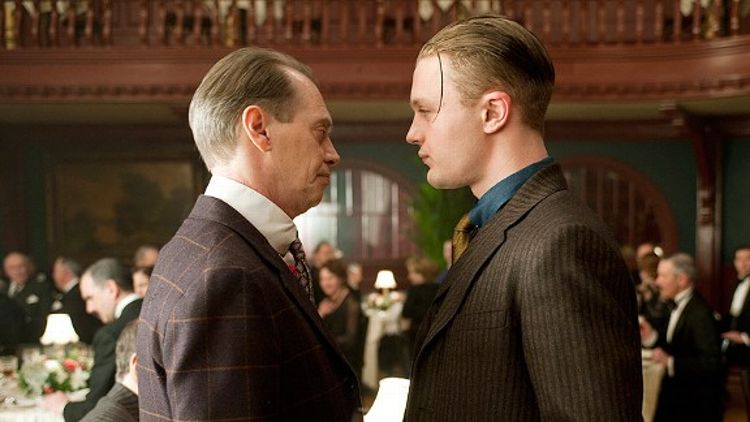 Mrs. Schroeder descends the staircase to find the maids all chirruppy. Perhaps they saw the good buzz Downton Abbey gets and wanted a piece of the upstairs/downstairs action. They hand her a newspaper showing that Nucky has been arrested, and she changes the subject breezily. She makes a phone call and finds out that Nucky is out on bail. Nucky and Chalky share a comically theatrical-looking jail cell. They talk election fraud; apparently he heard about the dollar-bill promotion scam from Tom and Jean-Ralphio’s Entertainment 720 on Parks and Recreation.

Meanwhile in New York City, Jimmy is hanging out with his best bud Patti Smith. Just kidding, he is meeting with Arnold Rothstein on the recommendation of his buddy Charlie. Jimmy seems like such a humorless sop, and Rothstein challenges him to define himself. He lists his qualifications as a means of self-definition and Rothstein nudges him out without any promises, and then mentions Nucky’s jailing. Charlie tells Jimmy to join him for a poker game later to further his cause. Nucky gives himself a close shave while a man with ridiculous hair gives him some real talk about his chances in the media circus that will be his upcoming trial. Is the fish trophy on the wall a nod to The Sopranos‘ episode about Big Mouth Billy Bass?

Mrs. Schroeder wears her maid’s coat and runs the “poor Irish girl” interference scheme she is so well known for. She might have overplayed her hand a little on the whole helplessness bit. Nucky makes a speech for a squad of reporters, who ask a bunch of questions about how dirty the city is. The Commodore objects to the idea that there is such a thing as a “young man’s game,” lifting a giant phallic tusk to emasculate his underling. The Commodore’s goon squad looks forward to screwing Nucky and stealing his business. All of his metaphors boil down to hunting. For the Commodore, life is as simple as this: shooting to kill.

Chalky’s wife visits him in prison, where he is maintaining as much dignity as a man in a plaid suit and silk bow tie behind bars can. His overachiever son has given her a copy of David Copperfield to gift him to read in jail. Am I the only one who wishes this show were The Chalky Hour? Like, forget Nucky and Jimmy. Just nonstop Michael K. Williams. A slick dude across the hall named Dunn Purnsley strikes up a conversation with Chalky just as he is ferried into the group cell. Nucky demands an emergency meeting and a florist. The kids run into the room and her son’s propensity for violence continues as he wields a hammer. Joe McGarrigle’s assistant Slater appears, ready to case the house for his visit. She is hostile to him in the way you can only be to somebody you think is incredibly hot when you are otherwise committed. Chalky’s new antagonist mocks his bourgeois pretensions, but Chalky avoids the bait with a joke.

Nucky is sweating the rats on his team and he calls them in to grill them on snitching. The Commodore’s associates debate the merits of teaming up with The Commodore. Jimmy is trapped in a bagel store in New York, and doesn’t take well to a stray crack about how his mother is a whore (because his mother is, in fact, a whore). Charlie’s friend suggests that they stop suckling at their bossman’s teats and move into working their own business operation. Margaret pulls the rug down and makes more perfunctorily disinterested small talk with Slater. She can’t even look him in the eye! She pretends to straighten pillows so that she won’t jump him at the bottom of the staircase like Sookie O’Stackhouse. Nucky is home and he is fucking pissed. His brother Eli calls to salt his mind wounds.

Jimmy plays poker in an old-timey New York parlor as viral marketing for the upcoming Broadway musical Newsies. Jimmy unwisely pokes his nose into Lower East Side business. What do you think he and Patti Smith talk about? I would like to see Patti Smith as Mae Coughlin Capone. Barring that, I would like to see her on How to Make It in America as a Valerie Solanis/Zodiac-inspired serial killer who murders vapid New York scenesters for sport. Dunn tries to intimidate Chalky with internalized racism, and insinuates that Chalky cannot read and ought to stop striving above his station. Chalky knows every young thug in baby booking, and they protect him from Purnsley’s wrath.

Slater flirts with the help and sits with his back straight, making eyes at Margaret. McGarrigle brusquely makes the same judgment of Mrs. Schroeder that Dunn Pursley did of Chalky White. Mrs. Schroeder acquits herself beautifully, and McGarrigle responds by getting one more dig in. Jimmy smokes moodily in front of a statue when he is held up by a couple of hoods. One cold-cocks him in in the head with the butt of the gun. Jimmy slashes the guy’s throat and knifes the other one in the back, and a perfect strand of hair drops over his eye. The Irish want guns, and need Nucky to provide them. McGarrigle frostily drops out, leaving his dirty-joke-telling minion Slater and suggesting Nucky mentor him. Oh, great. That will end well, and not like the R. Kelly “Down Low” video.

Margaret heads into the living room to talk to Nucky in front of the fireplace. She criticizes Nucky for trying to protect her by keeping her in the dark. She is too smart. He tells her the truth, but you can tell he also wants to go up into that no-thinking place in his head that Dunn Purnsley was talking about in the jail cell. She shows him his diaries and reckons they ought to burn them so as to purge his records. After tossing one right into the blazes, she turns loving and motherly again, soothing him and begging him to come to bed. I hoped Nucky might do a little jig, but alas.

Body Count: 2
Sex Scenes: 0 (and no Paz, sadly)
Ragtime Songs: 3, but all instrumental and mostly as ambient background