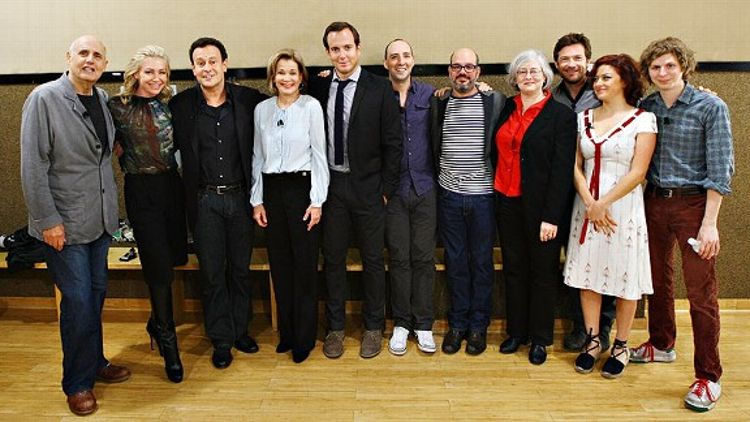 Holy crap! The Arrested Development movie, which has been rumored for so long that it accidentally became a joke, is actually happening. OK, well, maybe. After the project was mentioned at a cast reunion at the New Yorker Festival this weekend, Jason Bateman followed it up by tweeting, “We will do 10 episodes and the movie. Probably shoot them all together next summer for a release in early ’13.” Fans of other beloved cult TV shows that have had movie versions discussed — without what seemed like a realistic chance of having that movie made — you now have new hope! Grade: A+ [HR]

Kurt Russell will replace Kevin Costner in Quentin Tarantino’s Django Unchained, as the evil slave trainer Ace. Russell actually hasn’t been seen in a movie since his last flick with Tarantino, Death Proof. Has he just been sitting at home, bouncing a tennis ball, staring at the phone, willing Quentin to call? Grade: A [HR: Part 1, Part 2]

Melissa Leo and James Badge Dale are joining Flight, the Denzel Washington movie about a Sully Sullenberger-type pilot who has his history of drug abuse cleaned up by the FAA. Leo will play an investigator trying to expose Denzel; Dale’s character is currently just described as a cancer patient. And, somewhere, real Sully continues to be sad that millions of easily uninformed moviegoers will eventually be convinced he has drug problems. Grade: B+ [HR]

Jim Breuer sold a multi-camera comedy to ABC, which will revolve around him, his wife, his father, and his three daughters all living in the same house. It’s nice that the comedian is returning to television and all, but if you really want to make us feel good about a “Jim Breuer sitcom,” how are the words “Goat Boy” nowhere to be seen? Grade: C [Deadline]

Charles Segars, the mastermind of the National Treasure movie series, has been hired by Fremantle Media to write Blood & Treasure, a TV show about two brothers who go globetrotting in order to solve crimes and historical mysteries. And the pressing question here: Is Nicolas Cage broke enough to consider doing TV? Grade: B+ [Deadline]

Danny Masterson has landed the lead role in TBS’s Men at Work, a comedy created by Breckin Meyer (!) about a recently dumped guy trying to recapture his swag. Along with the recent ubiquity of Mila Kunis and Ashton Kutcher, and the steady careers of Topher Grace and Laura Prepon, this news continues the hot streak for former cast members of That 70s Show not named Wilmer Valderrama. Grade: C+ [Deadline]

The "Headlines" Video: Is Drake a Vampire?