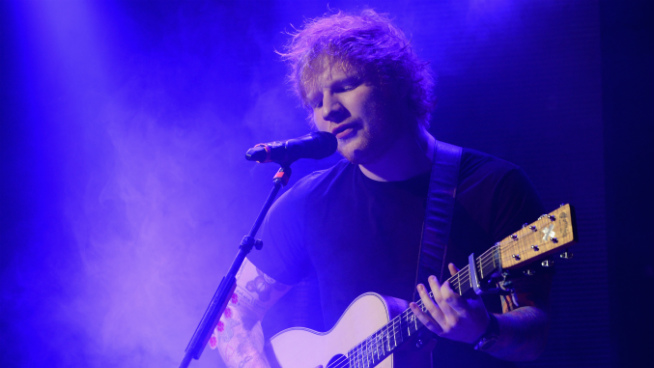 Background: When he’s not shopping for new Boba Fett T-shirts and being permanently friendzoned by Taylor Swift, Ed Sheeran may secretly be one of the most steely-eyed, ambitious singer-songwriters since … well, Taylor Swift. Though he made some modest waves with his debut album, +, and single “The A Team,” neither caught on in the States as much as on his home turf, the U.K. But he’s spent the last couple years seeding his U.S. takeover, opening for Swift on her massive Red Tour, and diligently making his rounds on the celebrity social circuit. He hosts “Nashville-style, living-room writers’ round” jam sessions with the likes of Swift, (former fling) Ellie Goulding, and Gavin DeGraw, and was recently crashing for free with his other famous BFF Courteney Cox. He’s maybe a skosh too eager to live his life like an IRL version of Nashville, and he may have picked up Swift’s penchant for airing out her dirty laundry in song form, but it certainly keeps him in the press.

Sheeran has been a pretty devout acoustic folkist thus far, and for a while seemed to be poised to take up John Mayer’s sensitive WGWG mantle, but “Sing” sees him teaming up with none other than Pharrell Williams for something more party-friendly and … maybe a little sexy? (?) Sheeran still stays unplugged throughout, apparently at the advice of Rick Rubin, who suggested he record all his tracks acoustically for upcoming sophomore album x (pronounced “multiply” and not to be confused with Chris Brown’s 2014 album X, lol), which Rubin is producing. That’s right, Ed Sheeran has both Pharrell and Rick Rubin on staff now. He’s really stacking his deck, and it looks like it might pay off just in time for the pop battles of summer 2014.

Why It’ll Smash: Let’s just start with the numbers. Though Sheeran had some chart success with 2012’s “The A Team,” the highest that song ever climbed was no. 16 on the Hot 100. “Sing,” on the other hand, became in its first week both Sheeran’s strongest U.S. chart debut and his all-time highest-charting single, starting at no. 15 on the Hot 100. It has since held steady in the Top 20 for the past three weeks. That is just south of Katy Perry/Rihanna–esque performance, and a huge jump in visibility for Sheeran. All this bodes very well for its ubiquity over the next few months. (It’s currently no. 11 on the Radio Songs chart.)

Then there’s the airtight political game Sheeran’s been playing over the last couple of years. Swifties and One Directioners (Sheeran has penned several songs for his fellow countrymen), torn asunder after the Sadboat disaster of 2013, can reunite in support of Sheeran, effectively creating a fan army to rival that of the currently embattled Beliebers. Sheeran’s circle of celebrity buddies will continue to boost him up on Twitter, and social-media action tends to lead to more airplay. It’s just hard to hate Sheeran; it seems just about everyone wants to see him win.

But let’s not discount the most important factor of all: This song was made for summer. Sheeran’s rhythmic acoustic guitar is a breeze of warm air over Pharrell’s sparse but effective drum machines. It’s got a chorus you’ll know the words to after one listen (“Sing! Louder!”), and its drunken-hookup lyrics capture the essence of a summer fling. This’ll go just about everywhere you’ll find yourself this summer: a backyard barbecue, between innings at a Dodgers game, in an overheated car as you roll down the windows and blast the AC.

Liabilities: While the bridge is an instant earworm and the chorus is wisely “ohhh”-based, the rest of “Sing” doesn’t quite do what its title promises. The verses are long and wordy and not terribly strong melodically; sometimes it sounds like not even Sheeran knows what notes he’s supposed to be hitting. A summer jam, being the musical equivalent of the summer blockbuster, should cater to low attention spans, and “Sing” has some stretches that could have you reaching for your radio dial (or the next tab). Plus, is the world ready for Ed Sheeran’s Suffolk flow?

Current Summer Jam Contender It Will Crush/Replace: Not that there can’t be two Pharrell-associated jams at once in the Top 10 (see: basically all of last summer), but if our last contender doesn’t boot out “Happy,” this most certainly will. I can also see it taking some wind out of JT’s “Not a Bad Thing,” which is probably too down-tempo to be a real world-dominating summer jam.

The ‘They Came Together’ Trailer: Wet Hot American Rom-Com