‘Bangerz’ Unplugged: Miley Cyrus Teams Up With Madonna and a Human Horse for Her MTV Hump-Day Hoedown 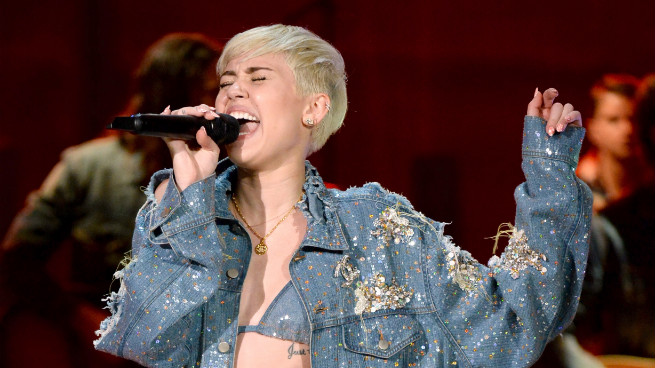 For many of us, last night’s MTV Unplugged might have been the longest continuous chunk of time we’ve ever spent with Miley Cyrus. The lil’ rabble-rouser was ubiquitous in 2013, but that ubiquity could be traced back to her two big hits, “We Can’t Stop” and “Wrecking Ball”; their corresponding young-drugs/young-butts-riddled videos; and her salt-of-the-earth VMAs performance. Though her name was everywhere, we were, for the most part, spending roughly three and a half minutes with the young lady at a time. So what was it like to go over to Miley’s house not just to cop an eighth of salvia, but to actually hang around and hit her homemade water pipe and talk about life and stuff? It was very Miley-y!

Channeling the country lineage ostensibly handed down to her by her pops, Miley went and translated “unplugged” as “ratchet hoedown.” She came out with a blonde wig, white boots, a white handkerchief, a little purse, and a skintight onesie possibly constructed out of the discarded tablecloths of Little Italy restaurants. She tweeted out an explanation that this was paying homage to her “inner fairy god mother,” along with a collage of her look next to classic Dolly Parton assemblages. But I’m pretty sure Ms. Parton never rocked neon-green weed-leaf earpieces. Not long after, Miley changed into a shredded glitzy-denim getup with bikini top that seemed more Aaliyah than anything else. “I don’t think I’ve ever sweated so much in a bikini,” Miley told us. “It’s hard to sweat in a bikini. But I’m sweating in a bikini.”

Within the very first few minutes, we had Miley popping the Miley tongue as she backed up on a couple of helpless saps in a horse outfit. A couple minutes later, a midget dressed as Miley came out, and the two, briefly, became a crotch-grabbing power couple. Not long after, she turned her attention back to the horse: Crooning “Get It Right,” she bit her lip, batted her eyelids, petted its head, and, finally, consummated her forbidden flirting by climbing on top for a ride. (Note that most of this stuff was topped off with “Devil Went Down to Georgia”–esque fiddle extravaganzas.)

She bantered, in her, um, inimitable tone, and reminded us all that Vanessa Bayer is a prophet; she sang quite well, ably rocking her own ballad “Adore You” and Parton’s all-time classic “Jolene.” Finally came the surprise that Twitter already told you was happening: Good lord … that’s Madonna’s music!

With Miley kicking into Music cut “Don’t Tell Me,” the archetype herself popped out of the back seats, wearing her very own all-black cowboy getup, to hop up onstage — and get right into some humping. And there were two things we learned: Madonna and Miley have a very similar humping technique, and they are, appropriately, almost the exact same size. “Don’t Tell Me” segued into a “We Can’t Stop” mash-up, and the two just kept on single-file humping. Madonna stuck out the Miley tongue, just for a second, just long enough; as they ambled off, almost skipping, she weirdly riffed “Here we go … here we go … we’re going to the party.” But the all-important denouement had already come to pass. With the two songs melding together, and the past and future of pop provocation in perfect hump-synchronicity, they shouted out their mantra: “Don’t you ever tell us to stop!” We won’t, Miley. We won’t.

Is Louis C.K.'s 'Tomorrow Night' Worth Your $5? (And Other Assorted Questions About His Directorial Debut)