Is Louis C.K.’s ‘Tomorrow Night’ Worth Your $5? (And Other Assorted Questions About His Directorial Debut) 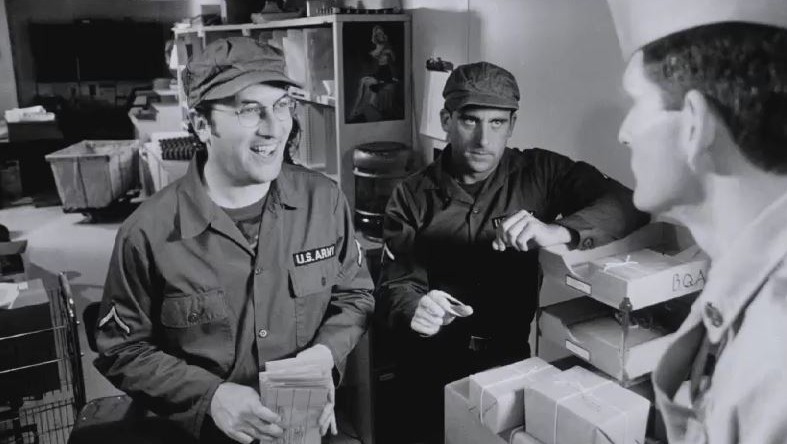 A little more than two years ago, Louis C.K. decided to sell a new stand-up special for $5 on his website. It was a huge hit, pulling $1 million in less than two weeks. C.K. has been marketing his comedy (and tickets to his performances) online ever since, and now he’s doing it with Tomorrow Night, a film he wrote and directed in 1998. The black-and-white feature went to Sundance and some minor festivals before heading straight to the vault, never finding distribution. Did Tomorrow Night deserve to stay hidden all those years, or is it worth your five bucks? Let’s talk about it.

Is this the only movie Louis C.K. has ever directed? No, but it was his debut. Three years later he wrote and directed Pootie Tang, which Paramount took away from him during the editing process, resulting in a product C.K. would look back on as “a tragedy to me” and “a very huge mistake.” C.K. told Howard Stern he can’t even watch two minutes of Pootie Tang, and he hasn’t directed a film since. So it’s a given that C.K. holds Tomorrow Night in higher esteem, if he’s selling it and publicizing the release on The Tonight Show, Late Night, and The Daily Show.

Does Louis act in Tomorrow Night? Quickly and sneakily, as a guy spraying down sidewalks — and people’s faces — with a hose. That’s it.

But he did lots of other things? Yes. As with FX’s Louie, it was his creative baby. In an email to his mailing list this week, C.K. said Tomorrow Night’s main intention was “to create performance opportunities for all my favorite funny people.”

Who were all those people? Steve Carell, Amy Poehler, Conan O’Brien, J.B. Smoove, Wanda Sykes, comedians Todd Barry, Nick DiPaolo, and Rick Shapiro, and also Robert Smigel, who you might remember as Paul Rudd’s buddy in This Is 40.

That sounds great! Hold on. Out of all those people, Carell, Smigel, and Smoove are the only ones who have roles anywhere close to substantial. (Poehler doesn’t speak, and you’ll miss her if you blink.) However, those three guys are outrageous. Carell and Smigel are constantly laughing as hard as humanly possibly, and Smoove is just Smoove, the scene-stealer he remains to this day.

Who’s the star? Comedian Chuck Sklar. He’s also a writer and producer, most recently on Totally Biased With W. Kamau Bell. Despite a thin acting résumé, he’s terrific in this role.

What’s Tomorrow Night “about”? It’s about an extremely socially awkward, obsessive-compulsive, vaguely misanthropic, maybe-still-a-virgin man who works in a photo shop. At night, he pleasures himself by putting on an old record and rubbing his ass in a big metal bowl of ice cream. It’s “about” … well … loneliness? Sexual shame? Nothing? It’s hard to imagine what you’d hear if you asked either 1998 Louis C.K. or 2014 Louis C.K. what he was trying to say with the story. There’s an art house look and feel to Tomorrow Night’s deliberateness, but that’s far from a guarantee that it’s trying to say something about the human condition. (Don’t rule out the possibility, though: C.K.’s comedy and TV show often hash out big, important themes, and his prime directive was still stand-up at the time of Tomorrow Night. It would make sense that underneath the silliness and madness was a gesture at something thornier. Marriage is poison in this film; C.K. himself got married three years beforehand and would divorce a decade later.)

I love the really weird parts of Louie. Am I the target audience? Not necessarily. The spirit of the series’ occasional absurd moments is here, but it’s not dominant.

There’s a character named Lola Vagina, though, isn’t there? OK, yes, there is.

And it doesn’t really follow the three-act structure, does it? No, not at all. Still, it’s not a bunch of isolated skits. It’s a narrative with supporting characters and continuing story lines. They just veer unexpectedly and don’t follow a traditional arc.

Will I laugh? You probably will, at least several times. Particularly at Steve Carell, and in several situations regarding an elderly couple.

How did C.K. stack up as a director back then, way before he started getting Emmy nominations for it? Pretty damned impressively. You can tell the ideas for these situations and performances came explicitly from his brain and were communicated and extracted with great care. And an anxious old woman turns in one of the most fun performances Louis C.K. has ever put on film.

Are there major through lines with Louie? Not really. Some of the Woody Allen–ish shots adoring New York scenery, maybe? And the fact that C.K. says the film taught him how to direct? And that Louie’s director of photography, Paul Koestner, and production designer, Amy Silver, also worked on Tomorrow Night? Also, J.B. Smoove appearing in black-and-white brings to mind the Season 3 Louie episode “Barney/Never,” in which Smoove plays an irate gravedigger in an episode-winning black-and-white scene at the end.

How does the movie look? It was shot on 16 mm reversal film and is generally pleasant to point your eyeballs toward. A few scenes are really washed out, but you’ll survive.

So is Tomorrow Night worth my $5? If you’re a fan only of C.K.’s stand-up work, you’ll still find plenty worse comedies and indies than Tomorrow Night, but there’s no strict guarantee you’ll love it. If you’re a Louis C.K. completist, absolutely. You might not come back to it in the near future, but you also might get excited about showing it to some friends and find yourself happily rewatching. If you love Louie unreservedly, definitely try Tomorrow Night, just to see what C.K. once did with total artistic independence in 90 minutes rather than 22. And then you can start hoping for his next movie.

'Bangerz' Unplugged: Miley Cyrus Teams Up With Madonna and a Human Horse for Her MTV Hump-Day Hoedown