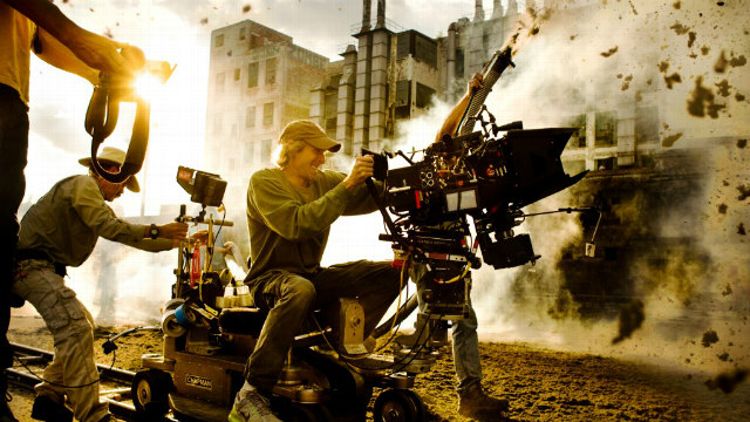 Look, Triads, we get it. Really, we do. You are an internationally renowned criminal organization. You’ve struck fear into the hearts of men from Shanghai to Macau to Vice City. Your tales are bloody, ruthless, unspeakable; your name is legend. But there’s one thing we need to get straight. You guys (at least you guys in Hong Kong) need to stop trying to extort Michael Bay on the set of Transformers: Age of Extinction. Not because it’s not, theoretically, a good idea: Michael Bay surely has many beautiful, priceless baubles on his person at all times. No, the reason you need to stop is because it’s never going to happen. After felling your air-conditioned-unit-fueled extortion attack once, the Bayonator has now done it again. As THR reports, “Hong Kong police are holding a suspected Triad gang member on suspicion of attempting to extort money from the crew on the set of Transformers: Age of Extinction, the second attempt in five days to blackmail the Paramount Pictures crew during filming in Hong Kong.”

Both times now, in typically humble fashion, Michael has played down the whole thing. The first time, he calmly explained, “I personally told this man and his friends to forget it — we were not going to let him extort us. He didn’t like that answer. So an hour later he came by my crew as we were shooting, carrying a long air conditioner unit. He walked right up to me and tried to smack my face, but I ducked, threw the air unit on the floor, and pushed him away.” This time, he says:

I’m here to set the record straight again … my crew and I have been having a great time in Hong Kong despite what you may have read about us being “rocked by a second extortion attempt.” Totally untrue. A few bad dudes have definitely not ruined the experience. We shoot from sun up to sun down, and the local HK crew have become part of our on-set family. We’re in the middle of busy streets, in businesses, and even in people’s homes, and everyone we’ve met has been very accommodating and generous. It’s been a once in a lifetime experience we’d all consider doing again.

THR made it sound a little more dramatic: “Police are looking for three alleged racketeers in connection with the latest case, which happened on the roof of a residential block in To Kwa Wan Road in the city at about 2.30 p.m. on Tuesday (Oct. 22) … According to police, the four men allegedly approached and demanded money from the crew, who were assessing the site at the time. The crew immediately called police. Officers arrested a 35-year-old Hong Kong man but the other three men escaped. A police source said the man was a suspected Triad criminal gang member.” But still, the point stands: This is pointless.

The really ridiculous thing? These Triads are trying to extort a movie involving both Michael “I Avert Long A/C Units With A Single Blow” Bay and Mark “I Probably Could Have Stopped 9/11” Wahlberg! Look, if Shia was still around, things might be working out differently. LaBeouf would probably take the Triads aside, ask to hear their life story, try to understand their misguided motivations, maybe even bond over some loud Feist. But Bay and Wahlberg? Uh-uh. Nooo. Not gonna happen. Sorry, Triads. Please stop trying. We would really hate to see any of you get hurt.

The Parenthood Cry of the Week: All Fights, No Tears