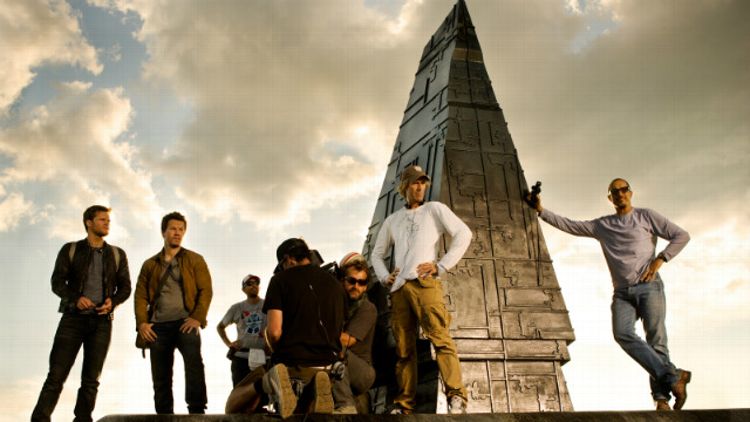 Let it never be said that directing a billion-dollar movie franchise isn’t dangerous work. Besides the day-to-day occupational hazards inherent to having your every whim catered to by hundreds of desperate-to-please crew members hanging on each expletive as if it were shouted by God himself — yell the wrong thing into your megaphone and suddenly five production assistants lie dead at your feet for failing to no-whip your pumpkin spice latte — there’s always the threat that forces darker than Starbucks decision-fatigue might invade at any time and shatter the illusion of safety created by your nine-figure-budget bubble. Just this morning, Reuters reported that Transformers 4: The Age of Extinction director Michael Bay was injured in an attack on the film’s Hong Kong set by a pair of brothers demanding to be paid 100,000 H.K. dollars. (That’s just under 13,000 USD, the kind of walking-around money Bay presumably has stashed in his Lamborghini’s bribe-holder at any given time.) A statement from Paramount disputing some details of the earlier report and denying that Bay or any of the crew were hurt — Bay had, in fact, disarmed his attacker, because of course he did — was quickly disseminated.

But Bay himself has now taken to his website to set the record straight once and for all. It is, as all missives dictated from the diamond-encrusted bullhorn of the splody auteur inevitably are, a bonkers must-read:

Yes, the story is being passed around is not all true! Yes, some drugged up guys were being belligerent asses to my crew for hours in the morning of our first shoot day in Hong Kong. One guy rolled metal carts into some of my actors trying to shake us down for thousands of dollars to not play his loud music or hit us with bricks.

Every vendor where we shot got paid a fair price for our inconvenience, but he wanted four times that amount. I personally told this man and his friends to forget it we were not going to let him extort us. He didn’t like that answer. So an hour later he came by my crew as we were shooting, carrying a long air conditioner unit. He walked right up to me and tried to smack my face, but I ducked threw the air unit on the floor and pushed him away. That’s when the security jumped on him. But it took seven big guys to subdue him. It was like a Zombie in Brad Pitt’s movie World War Z — he lifted seven guys up and tried to bite them. He actually bit into one of the guards Nike shoe, insane. Thank god it was an Air Max, the bubble popped, but the toe was saved.

Then it took fifteen Hong Kong cops in riot gear to deal with these punks. In all, four guys were arrested for assaulting the officers.

After that, we had a great day shooting here in Hong Kong. The place could be better.

An incredible tale of heroism to be sure, and one the famously modest Bay expertly downplays as something any director confronted by an air-conditioner-wielding extortionist who’s simultaneously auditioning for the part of Unhinged Garbage-Swinging Decepticon No. 8 would do. And if you’re wondering where Bay’s Autobot security detail was during this stunning perimeter breach, dispel your fears about their work ethic right now — Bumblebee and Jazz were at a far more important post, guarding the priceless Energon cube hidden inside Megatron’s severed penis, pictured above. There’s a reason Bay and Mark Wahlberg look so proud standing next to it. They know an amazing secret, and no Air Max–devouring zombie’s going to steal it.