The Parenthood Cry of the Week: All Fights, No Tears 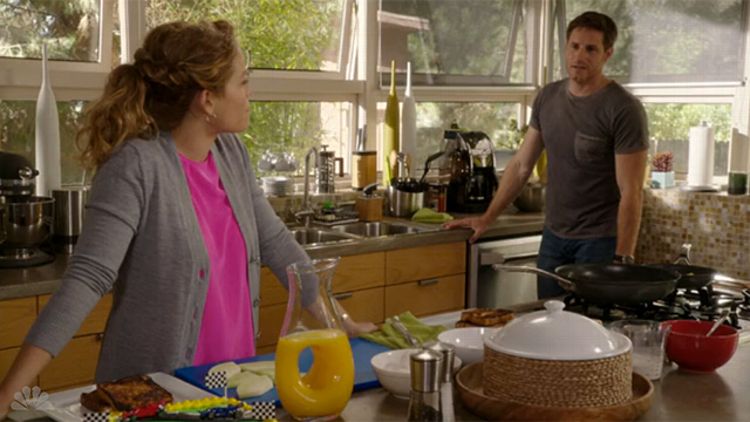 Back around the time that a band of ordinary superheroes burst onto NBC, the network adopted a single voice to narrate most of its promotional spots. It’s that breathy, doom-filled guy who warned us of the importance of saving the cheerleader (and, ergo, the world). Heroes is long gone, but somehow that guy can still be heard previewing the next week at the end of hour-long dramas and during midshow commercials for other NBC programs. Even as the voice has evolved over the years, all its iterations have sounded dissonant at the end of Parenthood. I don’t think this nameless, faceless guy really understands the particular toll of Kristina’s fight with cancer or Sarah’s various breakups. At least his foreboding communicated the fact that you’d be sobbing.

Now, in Season 5, there’s just one problem. All the tears have dried up, and the NBC man sounds more dissonant with this show than ever. At no point during Thursday night’s episode, “Let’s Be Mad Together,” was I even close to crying. The preview clip from last week fooled me! I thought this would be peak Parenthood. There were highs (drunk Joel in the grocery store with Crosby) and there were lows (Ryan the plumber), but not a single tear, not even a welling up of the eyes. Maybe it’s because everyone was mad — hence that episode title. Yet, I thought this was a great episode. I suppose the amount of crying is not the only way to measure an episode’s worth. So in honor of this week’s angry disposition, here’s a breakdown of this week’s most noteworthy arguments.

The Fight No One Cares About: Camille vs. Zeek

Braverman matriarch Camille is battling her husband. She wants to downsize, he wants to fix up their house on his own. He’s bossy, she has lost her voice. But wait: Who cares? Season 5 is Parenthood’s first 22-episode season since Season 2, and I suspect the lack of tears and the effort to expand Camille’s character are byproducts of the full-season order. There’s more time to let plot lines marinate and to develop characters, but I don’t think anyone was clamoring for more Camille. Season 1 featured a lot of screen time for the grandparents, including Zeek having an affair. I barely remember, because it was boring. Like Zeek’s involvement with Victor this season, Camille needs a narrative more connected to the rest of the family.

The Disagreement Amuse-bouche: Sarah vs. Amber

Based on last week’s preview, it seemed that Sarah and Ryan would really have it out. That was just a tease. All we got was an awkward Ryan and some plumbing problems. Ryan is dispatched to Sarah’s apartment to fix her clogged toilet, though she thinks he’s there to talk about why Sarah doesn’t support his impending marriage to his daughter. It’s awkward, but not quite as awkward as when Ryan barges into Amber’s apartment to tell her about the interaction. Did we already know that Ryan had a very direct demeanor? While the behavior may not have been part of his character profile previously, it certainly sets him apart from the oft-timid Bravermans. We also learned that Ryan has no family to invite to the wedding because he hates his mom and stepfather. It’s getting harder to dislike this character as he becomes better developed, but his expiration date is approaching. I’m not getting attached. There’s more Ryan-wedding fighting to come, so don’t get too worked up yet.

Crosby Braverman continues to be the beacon of light in this unfamiliar Parenthood terrain. Through five episodes, this season does not feel like it may be the last. It might be (especially since it’s going up against Scandal), but a tone of desperation does not pervade every episode like in previous seasons. The most consistent aspect (in addition to the brilliant dialogue) is that Crosby is the best Braverman, though this is a whole new Crosby. Adam is now the brother with the big, risky ideas for the Luncheonette. Adam is the one who forfeited billable hours and the one who tries to force Crosby to work ungodly hours. They ultimately fight when Adam defers to a difficult band while Crosby just wants to go home to his family. So Adam is still the annoying brother. That hasn’t changed. But instead of Adam coming to his senses, it’s Crosby who saves the day. His music and engineering expertise finally has a purpose as he’s able to negotiate with the irrational lead singer on a musical level.

It’s Like Watching Your Parents Fight: Joel vs. Julia

Like with the Sarah-and-Ryan fight, I thought this would be the week that the simmering tension between Joel and Julia would finally come to a head. That didn’t happen, and yet their fight was actually more painful than if it had. Julia feels that Joel is letting the architect (Penny from Lost, a.k.a. Sonya Walger) take advantage of him. Joel stayed out late with Penny and got drunk. (The drunkenness gave way to Joel’s all-time best moment, talking to a piece of cake while sitting in a car beside Crosby, listening to “Burning Love.”) Joel yells at Julia for being overbearing, and it’s very upsetting. Yes, she is overbearing, but hasn’t she always been? I think Joel and Julia’s relationship is the most realistic, which is why this fight was hard to watch. They are both right, and they are both wrong. It’s impossible to pick sides. Julia is frustrated at home as she’s still not working and her husband seems to be shutting her out. Joel is frustrated at home because his job is stressful and his wife is being difficult. The easy and very sad trajectory would be for one of them to cheat. I really hope that doesn’t happen. Considering that both Zeek and Crosby have already endured philandering plot lines, I think these two are bound for season-long strife with murkier moral boundaries. That will make us cry, right?