Against Me!’s Tom Gabel to Begin Living Life As a Woman 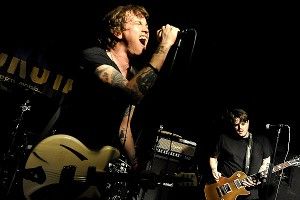 They say everything in rock and roll has already been seen? Well, here’s a new one: Tom Gabel of Against Me! — the Florida punk band behind a decade of the thinking-man’s irresistible sing-along choruses — has told Rolling Stone she’s transgender, and will now begin living life as a woman. The full story is in the next issue of the magazine, but an online preview right now explains that Gabel has suffered with gender dysphoria for years. Gabel — who is married, and will remain married — will soon begin taking hormones and undergoing electrolysis treatments, and will eventually change her name to Laura Jane Grace.

Rolling Stone‘s Matthew Perpetua tweets that “In the article [which is written by Josh Eells], Gabel talks about how she’s been addressing this for years in the songs, but no one at all picked up on it,” and specifically points out “The Ocean,” the last track off Against Me!’s breakthrough 2007 album New Wave. On that track, Gabel sings: “And if I could have chosen, I would have been born a woman / My mother once told me she would have named me Laura / I’d grow up to be strong and beautiful like her / One day, I’d find an honest man to make my husband / We would have two children, build our home on the Gulf of Mexico.”

Gabel says that “for me, the most terrifying thing about this was how [my wife] would accept the news. But she’s been super-amazing and understanding … I’m going to have embarrassing moments, and that won’t be fun. But that’s part of what talking to you is about — is hoping people will understand, and hoping they’ll be fairly kind.”

Finally, You Can Win a TV Date With The Situation