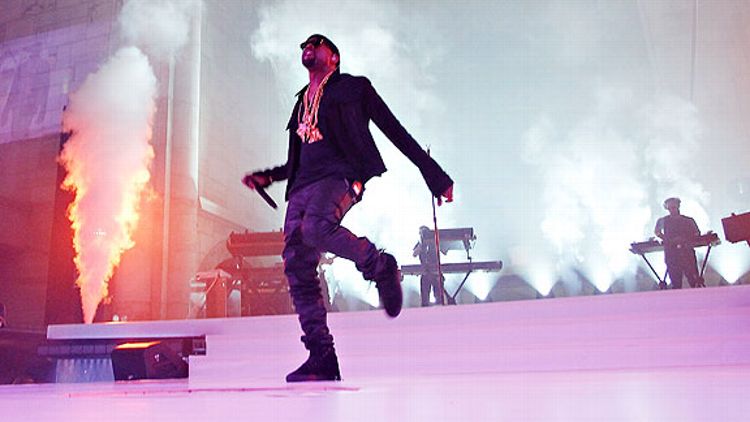 When did it start?
Last night, around 10:30pm EST, with a simple “I appreciate everyone’s support for my clothing line but I wanted to clarify a few things … ” It continued, unabated, for over 100 tweets, culminating — at around 2 a.m. — with this: “’If you have an apple and I have an apple and we exchange these apples then you and I will still each have one apple … But if you have an idea and I have an idea and we exchange these ideas, then each of us will have two ideas.’ — George Bernard Shaw”

Were there any warning signs at all?
Not really. Kanye had been ramping up his Twitter activity recently, possibly thanks to the conclusion of the Watch the Throne tour and with an eye toward the promotion of the upcoming G.O.O.D. Music album. But he’d been primarily shooting out cleavage-y photos of runway models.

So why rant now?
Ostensibly, Kanye was clearing up rumors that had recently circulated about his clothing line in the UK tabloids, which he’s now in London working on. But the careful observer may trace this sudden flurry of creativity to these mid-rant tweets: “I was just discussing becoming the creative director for the Jetson movie and someone on the call yelled out… you should do a Jetsons tour! … This just happened a few hours ago. I was very insulted of course becuase for anyone that’s seen the Watch the Throne Tour… Or Coachella or Glow in the Dark or Runaway.. you know I have real ideas…” Clearly, it was time to demonstrate those real ideas. So, thanks, anonymous person working on hiring Kanye as the creative director for the Jetsons movie who suggested such a stupid idea: You have become an unlikely inspiration.

What was covered?
Kanye started off simply enough, running through a history of his fashion-design ambitions and miscues that bounced between Rome, Japan, Paris, and L.A., and to contracts and apprenticeships with Louis Vuitton, Nike, and the Giuseppe Zanotti women’s shoes factory. Also, his clothing line is just called “Kanye West,” he funds it all himself, and his mother, Donda West, “would wear blue jeans with a fur and an embellished ‘Cosby Show’ sweater : ) to pick me up from school.”

Is that all?
Not even close. The main takeaway: Kanye has started a company called DONDA that will make your most ambitiously forward-thinking colleagues and acquaintances sound like myopic layabouts. Take it away, ‘Ye: “DONDA is a design company which will galvanize amazing thinkers and put them in a creative space to bounce there dreams and ideas… I want to put creatives in a room together with like minds that are all waaaay doper than me …To dream of, create, advertise and produce products driven equally by emotional want and utilitarian need.. To marry our wants and needs.”

Sounds fantastic! Is there a job for me?
Almost definitely: “DONDA will be comprised of over 22 divisions with a goal to make products and experiences that people want and can afford… I am assembling a team of architects, graphic designers, directors musicians, producers, AnRs, writers, publicist, social media experts… app guys, managers, car designers, clothing designers, DJs, video game designers, publishers, tech guys, lawyers, bankers, nutritionist … doctors, scientist,teachers…” Rest assured that the singular form of scientist was almost certainly a typo. Sounds like DONDA will definitely need multiple scientists.

Great. Where do I apply?
“If anyone would like to reach out email us at contactDONDA@gmail.com.”

Anything else? Did he shit-talk the Grammys?
Not really: “I appreciate having the most nominations at the Grammies but I feel so conflicted by the fact that award shows sometimes are completely… illogical.” He did suggest some education reform, though: “Spike Jonze and I want to do a Summer school that tries new forms of cuuriculim … Instead of kicking kids out of schools for using there iPhones… why not promote it? Allow kids to use search engines to do test…”

Wow. Sounds excellent. So where does this rank on the list of all-time Kanye rants?
Personally, we’re still partial to the one commemorating Alexander McQueen, which included such memorable lines as “Who’s that African in the background Mom? Oh, he created the original layouts for the pyramids, but he was written out of the history books and his MTV award was given to ‘Aliens.’” But as far as potential historical impact, it’s hard to discount this latest rant. Who knows where DONDA will go? The story continues.

What does Judd Apatow think?
Into it: “@kanyewest: I just wanted to share what’s been on my mind…” I Love you. do it all. fix the world and designer shoes and schools and rap!”