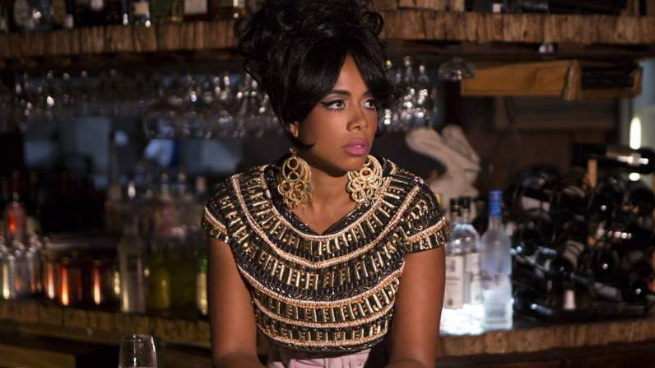 Being ahead of the times in a culture that mostly operates on trends means you often find yourself alone. Kelis Rogers has always had a certain loneliness in her voice that seems like the result of always being so far in front of the pack. “Runnin’,” the fifth song on her new album, Food (out on Ninja Tune next week), says as much: “I became a runner, but I’m not afraid, probably a big mistake, I never liked the cage.” Kelis is too original, too eclectic to be defined as any one kind of musician, or even any one profession. She became a certified saucier at Le Cordon Bleu in the mid-’00s and is releasing a line of sauces in tandem with the release of Food. She doesn’t think in binaries, or see her culinary interests as being in conflict with her love of music. One is a natural outgrowth of the other, and they both spring from the same source.

Because she is a black woman, Kelis’s music often gets categorized as R&B by default, but it’s always been too narrow of a definition for what she does, and Kelis herself has said she “was never an R&B artist.” She’s more similar to artists like Björk or Kate Bush, transcribing new sounds that previously only existed in her head, pioneering new styles with each album cycle and then leaving them behind for latecomers to rip off a few years afterward. Kelis’s need for new sounds isn’t fickle or fad-chasing; it’s part of her constant need to progress forward and evolve.

Like her early collaborator (and ex-boyfriend) Pharrell Williams, Kelis believes that vocals are a percussive instrument, just as vital as the drums. She sometimes punctuates her phrasing with grunts, and her voice occasionally breaks. Her voice has quirks and corners and takes up physical space. She sounds like a specific person, and is instantly recognizable — the opposite of Auto-Tune. Her early single “Caught Out There,” off 1999’s Kaleidoscope, revolved around her scream of frustration at a cheating boyfriend, and ever since, Kelis has trafficked in immediacy. No matter how complex the arrangement or futuristic the beat, her songs are always grounded in her very down-to-earth, extremely expressive voice. She is honest, sometimes hilariously so. “Kelis” is not a pop persona, it’s a genuine extension of her real self. When a New York Times reporter compared her to Paul Newman, Kelis stated, “I don’t know what Paul Newman’s situation is, but I make sauce.”

2001’s Wanderland, with the bombastic Neptunes squelch of its lead and only single “Young, Fresh n’ New,” still sounds fresher than 99 percent of what’s on the radio right now. Wanderland was never even released in the United States, because Virgin Records didn’t understand how to market an experimental genre-bridging album made by a young black woman and didn’t care to find out. It was released in Europe, where perhaps musical boxes are not so strict. “Young, Fresh n’ New” became Kelis’s third top 40 hit in the U.K., where she was critically well-regarded from Kaleidoscope and had a cult following as an avant-garde songstress. The bonus track on Wanderland was a Neptunes-produced cover of Phil Collins’s “I Don’t Care Anymore,” which more or less sums up their shared sensibilities.

Kelis didn’t have a major success in America until “Milkshake.” Eleven years later, “Milkshake” remains mint, the droney peak of her work with the Neptunes. The other songs on 2003’s Tasty paved the way for her future work. The dubby Dallas Austin–produced joint “Trick Me” proved Kelis could work with any flavor palette. The album’s other big hit was “Millionaire,” produced and cowritten by André 3000, another iconoclastic musician who refused (and still refuses) to be boxed in by the conventions of mainstream music. André and Kelis are kindred spirits, musically descended from the experimentation of Prince. They don’t make just one kind of music, because they listen to every kind of music, and why shouldn’t their output reflect that diversity? Kelis’s music is difficult in that it is hard to describe, but it is extremely pleasurable to listen to. That her style can’t be easily pegged is exactly what makes her so great. And if Kelis is less of a household name in America than André and Pharrell, it might be because men who defy categorization are often lionized as complex while their female counterparts are derided and called difficult.

Her follow-up to Tasty was Kelis Was Here, which spawned another hit with “Bossy,” featuring Too $hort. The single’s cover art was a woman’s high heel, presumably Kelis’s, stepping on a prone man’s back. “Bossy” went double platinum, the video featured Kelis draped in diamonds and octopuses, and to this day all the women and some of the men (the cool ones!) will go crazy when you play this song at a party. Kelis defeats the “Ban bossy” campaign in one fell swoop in the song’s intro: “You don’t have to love me, you don’t even have to like me, but you will respect me.” I can’t tell you how many times I have repeated this mantra to myself in times of true need. It is my feminist version of the “when you get the money, you get the power” speech from Scarface.

2010’s Flesh Tone, made when Kelis was pregnant, in between labels, and going through a divorce, showcased Kelis at her most emotionally vulnerable and musically chilly, spilling her guts out against a backdrop of house and dance music beats produced by big names in Euro-EDM like David Guetta and Benny Benassi. She did a joint tour with Robyn, another awesome self-made female artist who resists all traditional labeling. Kelis wore a Cher-like tinsel wig and reinvented herself yet again as a disco diva.

Food is a soul album, but it doesn’t sound quite like any soul album you’ve ever heard before. Produced by TV on the Radio’s Dave Sitek, it has elements of almost everything: folk guitar, prog keyboards, trip-hoppy Middle Eastern strings, hip-hop bells, funky bass, Fela Kuti horns, and ethereal high notes à la Minnie Riperton. It has retro flourishes but it never sounds like a “retro” album. It’s not a wax museum of classic sounds, although it alludes to the entire histories of funk and soul music — it genuinely feels like a living, breathing thing. Food is full of love songs, many of them named after favorite dishes with titles like “Jerk Ribs,” “Cobbler,” “Friday Fish Fry,” and “Biscuits n’ Gravy.” It’s the first food-themed concept album I can recall since Cibo Matto’s 1996 LP Viva! La Woman (which I love). In Kelis’s songs, food is a metaphor for all kinds of connection. Food is warm and hopeful, vulnerable and powerful, a cohesive narrative about opening yourself up to the possibilities of real, genuine love.

Maybe America is finally ready to embrace Kelis as a career artist. They’d be idiots not to; she is a national treasure. With Food, Kelis set out to make sonic soul food, and she succeeds on every level. She told you she could make sauce.

'Orphan Black' Returns for a New Season, Even Clone-Crazier Than Before

Video on Demand Report: Catch Up With Power Duo Judi Dench and Steve Coogan in 'Philomena'