Video on Demand Report: Catch Up With Power Duo Judi Dench and Steve Coogan in ‘Philomena’ 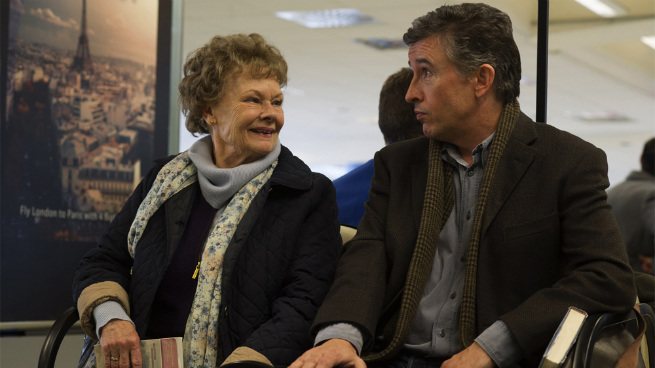 The Catholic church may be enjoying a period of positive press at the moment because of the worldwide excitement over the comparatively progressive new pontiff, Pope Francis, all of which is certainly deserved. But stories like Philomena are a reminder that, like most institutions, the church has ruined some lives.

Based on true events, Philomena tells the story of Philomena Lee. As a young woman, Philomena became pregnant out of wedlock and was sent to an Irish convent to have the child. Without her knowledge, her son Anthony was placed for adoption, and though she tried multiple times over the years to find out where he’d gone, the nuns at the convent refused to give her any information. And so the story would have ended, if not for an encounter when Philomena’s daughter meets journalist Martin Sixsmith at a party and urges him to tell her mother’s story. He agrees, and the mismatched pair set off on a quest to track Anthony down.

Steve Coogan stars as Martin, and cowrote the screenplay with Jeff Pope; their screenplay earned the film one of its four Oscar nominations, including Best Score, Best Actress (for Judi Dench in the title role), and Best Picture.

Wesley Morris: “[Director Stephen Frears] often keeps Dench and Coogan in the same shot so you can see them reacting to each other. The sight of her nattering on about a romance novel as he barely disguises his disdain is very funny. Frears knows where all the human moments are.”

It’s hard enough for a guy to impress his girlfriend’s brother if he’s just a regular joe whose default facial expression isn’t somewhere between a snarl and a scowl. But what if you were planning to propose to a girl, but first had to get the permission of her brother, who’s as grumpy as Ice Cube on his worst day AND a cop?!

Kevin Hart (last seen in this space as the motormouthed promoter in Grudge Match) is Ben, the suitor, a tiny school security guard. Ice Cube is, as you may have guessed, his girlfriend’s stern brother James. When said girlfriend/sister arranges for James to take Ben on a ride-along so they can get to know each other, wacky action high jinks actually bring the two closer together. (Oops. Spoiler?) In addition to the standard theatrical version, you can also rent a version with a gag reel … so Wesley Morris’s comment below is not applicable to THAT one, but it’s too good a line not to feature.

We’ve come to the point in the year when the new releases on VOD mostly come from January, a notoriously crappy time for movies. But even for January, and even among kids’ movies, The Nut Job was particularly unloved: Its Rotten Tomatoes ratings topped out at 11 percent, and one pair of parents I know said their 3-year-old couldn’t even bother sitting through it.

BUT, if all that hasn’t dissuaded you: The Nut Job is the story of squirrel Surly and rat Buddy, who — after accidentally incinerating a raccoon’s winter food supply — are banished from a park and sentenced to try to survive on the mean city streets. But the discovery of a well-stocked nut store inspires Surly to plan the biggest nut heist of his career.

Wesley Morris: “This movie purports to be a caper adventure featuring park rodents trying to steal sacks of nuts from human gangsters. The whole thing looks like a video game you’d rather not play.”

Sometimes it seems like the only great male artists worthy of being biopic subjects are ones who cheated on their wives. And here’s the latest!

Ralph Fiennes directs (only his second feature, after 2011’s Coriolanus) and stars as novelist Charles Dickens. Felicity Jones plays Nelly Ternan, a former actress 27 years Dickens’s junior, who was his mistress for the last 13 years of his life. And if you miss The Hour like I do, the best news is that the screenplay — based on Claire Tomalin’s Ternan biography — was adapted by series creator Abi Morgan.

Busy Rebecca Hall has not one but two films opening in theaters today. Transcendence puts her in the not-so-distant future, weighing the consequences of consciousness living on past a person’s physical death; A Promise sends her back to World War I for a corseted love triangle.

Available to rent on its theatrical release day, A Promise stars Alan Rickman as a German tycoon whose affairs are being managed by a young engineer (Richard Madden, most recently of Game of Thrones). When the older man’s failing health renders him housebound, his employee has more cause to spend time with his boss’s much younger wife (that would be Hall), and a forbidden attraction is born.

Some teenagers earn mad money working at fast food restaurants or with a paper route. Some organize their buddies into crime syndicates and smuggle weed over the Canadian border, and it’s the latter kind whose lives get turned into movies.

Kid Cannabis — which you can rent the same day as its theatrical release — is based on the true story of Nate Norman, a teenager in Idaho who earned more than just college tuition running marijuana. The kids are mostly newcomers, but John C. McGinley plays the grower who supplies the operation, and Ron Perlman appears as its moneyman.