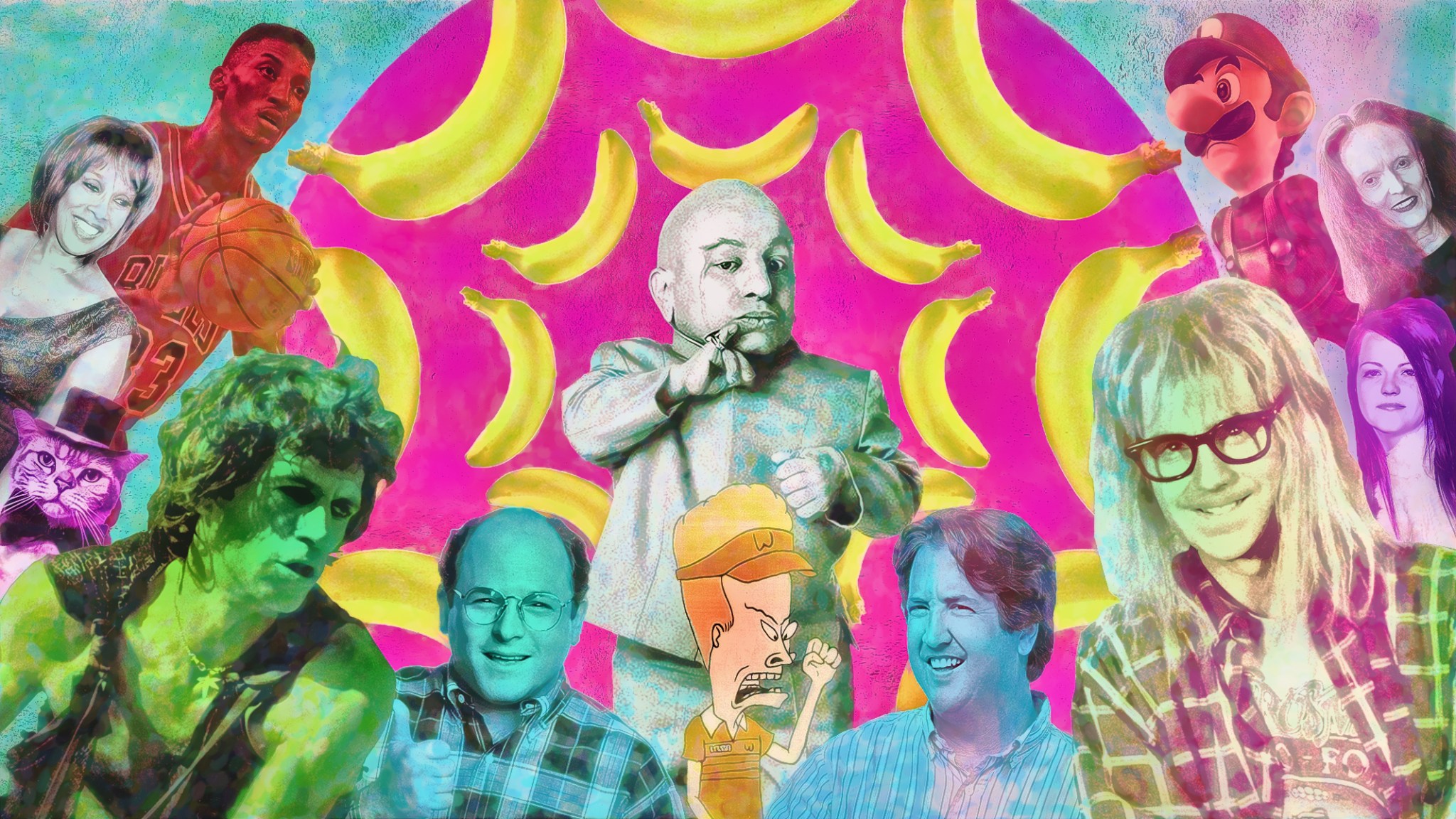 I had a Scottie Pippen poster on my wall growing up. I remember it well; it was right above my bed. Scottie was superimposed on a gleaming office tower for some reason, blue sky and fluffy clouds all around him, as he flew through the air on his way to the hoop — calm, steady, and reliable as always. We can chalk up my having the poster, in part, to the all-permeating popularity of the mid-’90s Chicago Bulls. But why did I go Pippen over Jordan for that prime above-bed spot? I’d like to believe that in some small way it’s because even back then I implicitly understood the life philosophy I’d like to explicate now. To be a second banana — a sidekick, a consigliere, a capo, a second-in-command, a right-hand man, a “buddy” in buddy cops, a “co” in cohorts, a guy forever next to The Guy — is a glorious thing.

To vote for the greatest Second Banana ever, click here.

John Stockton never had to hear about how the delivery service from which his nickname was derived didn’t operate on the Sabbath. Beavis never had to come up with the plans; he just happily chomped on his NoDoz and glued his head hair to his face. The Edge never had to attend a U.N. subcommittee meeting on waste management policy in Papua New Guinea. Slash never even had to wear a shirt! His primary responsibilities included hanging outside a sad church service and wailing on his ax.

It’s a tougher row to hoe in rap music, where greatness — which is somehow self-actualized and divinely granted at the same time — is the most sacred state of being. But look at hip-hop’s greatest second bananas and realize they were made for their roles. Without the Roy G. Biv insanity of Flavor Flav, does Chuck D access the joy at the heart of his rage? Q-Tip was never the same without his adorable partner-in-rhyme Phife Dawg running around, tugging on his pant legs. (“I like my beats hard like two-day-old shit”!) And Jay Z — well, OK, Jay would have been just fine without Memphis Bleek. But look how nice second-banana’ing worked out for Memph! Bleek could be one hit away his whole career, and as long as Jay’s alive he’s a millionaire. Bleek has actually been, generously speaking, an infinite number of hits away his whole career. And he still gets to have smoked Nova Scotia salmon for breakfast whenever he damn well pleases.

By the nature of their roles, second bananas don’t need to talk as much. And guess what: If you want to be imbued with an eternally seductive air of mystery, one way of going about it is shutting your mouth. Spock, Bunk Moreland, even Luigi — in light of their chattier counterparts, they were the possessors of indubitably more chill. Also, by the nature of their roles, they get to hug the edge — to play with sanity, theirs and ours. Witness Costanza, fantasizing himself on Hamptons beach properties. Witness Eastbound & Down’s Stevie Janowski — the evolutionary, fun-house Costanza — telling George Washington to, well, pleasure him.

There are times when a second banana is elemental, a necessary counterpoint to the overwhelming grandiosity of no. 1. They don’t live fully for or because of the First Banana. But their existence brightens and amplifies their counterpart. They help define their other. These relationships are simultaneously symbiotic and amorphously adversarial at the same time. Think the USA and Canada. Dogs and cats. Oprah and Gayle.

And at their best, we know this: The ultimate second bananas have always been there to push their First Bananas to achieve greatness. Because at their best, the second bananas want to be first. They can’t really admit it, not out loud. But Avon Barksdale doesn’t run all drugs out of West Baltimore without Stringer Bell alternately backing him and plotting to take the throne. Mick Jagger would be singing Howlin’ Wolf covers at the old folks’ home in Dartford right now if it weren’t for Keith Richards’s stingy love and covetous envy. And who knows what will yet happen in the deep recesses of Chesapeake Energy Arena on that next cold Oklahoma City night when Russ and KD kick back to arm wrestle and make fun of Perk and talk about life?

“From the very beginning, we said I’m the frontman and you’re the guitarist with mystique,” the wise Jeff Bebe once said. “That’s the dynamic we agreed on!”

But forget the frontman — we are here to say God bless Russell Hammond and his effervescent cool and God bless all the other guys next to The Guy, laying in the cut, making money, losing their minds, forever pushing forth greatness. God bless the second banana.

This is a Grantland bracket to determine the greatest second banana. The 64 contestants you see below were carefully whittled down. For the sake of (relative) cohesion, we limited ourselves to the years since 1975. And, as always, we cast our net wide, then got in a room and yelled at each other for a while. When the smoke cleared, these 64 were left standing. Some are controversial. Some are inanimate. Some are conceptual. Some are mustard. But all are worthy. And all await your judgment. Go! Vote now! 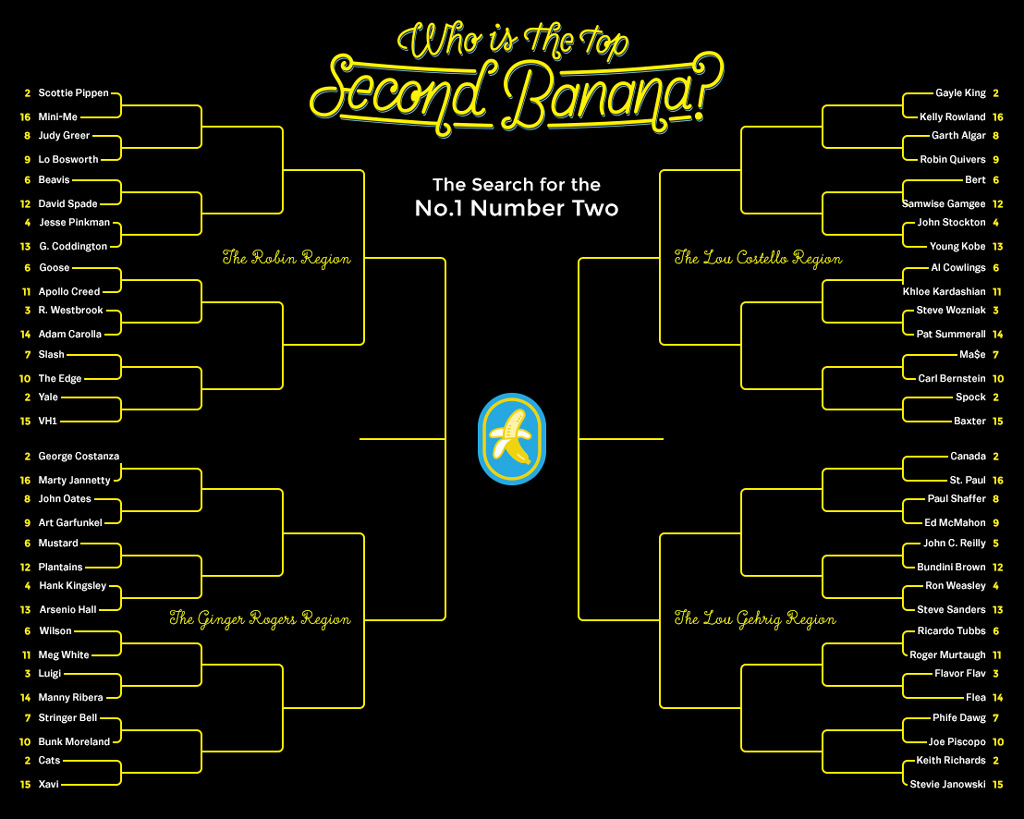