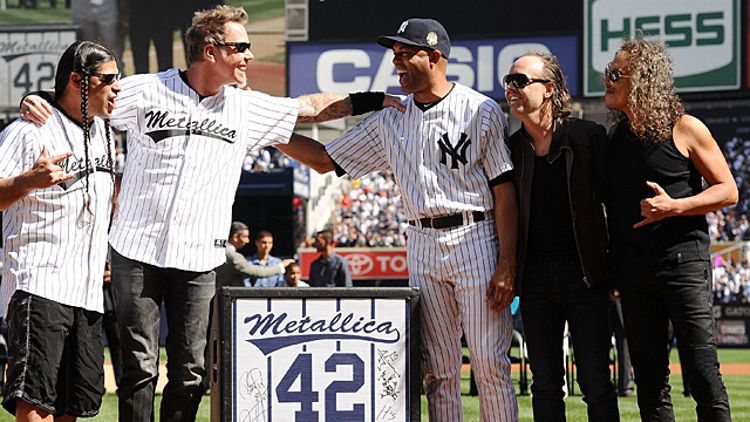 Yesterday was the saddest of days. Mariano pitched at Yankee Stadium for the last time in his career, and the last man to wear no. 42 is now just three games from retirement. But endings are also a time for celebration, so let’s accentuate the positive and honor the parting gifts given during the season to the greatest closer of all time. Some were great, some were awful, but all of them were, technically, gifts. Here they are, ranked from worst to first.

Classic Yankees: a little bit of substance, but just in case it’s not enough, THROW LOTS OF MONEY AT IT. This beat the second-highest donation by $89,958.

This post will unfortunately be published before the Yankees begin their final series of the year, against the Astros. So we have no real idea what Houston will do. On the other hand, this is the worst team in baseball. I feel entirely comfortable predicting that no matter what goes down at Minute Maid Park, it will be the worst.

This is like getting a gift certificate from your dad for Christmas. You definitely won’t say no to the money, but there’s a part of you that wishes he had put some thought behind it, even if the gift ended up worse than whatever you’ll buy. WHY DON’T YOU LOVE ME, DADDY?

This is like getting a gift certificate from your dad for Christmas, and he’s like, “I thought you could use it to buy some of that music you like.” THEY’RE CALLED ONE DIRECTION, DADDY! (OK, I have to stop saying the word “daddy,” because I’m creeping myself out.)

Believe me, I’m all for tacky gifts, PROVIDED there’s some thought behind them. This painting doesn’t commemorate a special moment in Mariano’s career, and it doesn’t even depict him pitching against the Angels. They just hired some semi-famous portrait artist, donated no money to the foundation, and wiped their hands clean. Plus, what the hell is he going to do with a giant portrait of himself? If he were A-Rod, he’d obviously make out with it, but I can’t see Mariano making any use of this.

This gift was in collaboration with FDNY Commissioner Sal Cassano, and it makes use of an old-school baseball term for an ace reliever: “fireman.” Apparently it was in vogue before “closer” came into prominence, so I guess kudos to the Mets for combining baseball nostalgia with the FDNY. But I think it was mostly confusing at first, and this reaction from Mike Oz at Yahoo pretty much sums up my feelings: “Like every other opposing home team, the Mets are honoring Rivera as he gets closer to retirement. They presented Rivera with a fire hose nozzle and declared him the ‘ultimate fireman’ — a baseball reference that’s a bit murky in a city where FDNY has reached hero status.”

“Hey, here’s a gift from some dude we found last minute at the beach and the lowest donation amount of anyone who gave money, which we’re justifying as the number of saves you’ve earned against the Rays multiplied by 50. It’s also our average attendance, but that’s just a coincidence. And, uh … sorry about how creepy and inaccurate the sand sculpture face looks. We didn’t want to splurge for the best guy, and to be totally honest, Tampa doesn’t have the best sand artists in the first place.”

Executive: What are we getting Mariano Rivera for his parting gift?

Ambitious up-and-comer: How about a plaque with photos and two bottles of dirt?

This is also how the Tigers decided to draft Justin Verlander. Amazing how successful they’ve been. (To be fair, the dirt is from each of Detroit’s last two stadiums, which I guess is kinda cool if you’re a sports memorabilia freak.)

OK, I’m breaking down the donations into membership tiers:

$0: Paper tier. I hope your gift was awesome.

$10,000-plus: Gold tier. For teams who want to get showy and philanthropic. Includes dinner.

Didn’t you read the description of the paper tier, Baltimore? If you’re not going to donate money, your gift had better be awesome. You couldn’t even make it gold, Showalter? I’m assuming Showalter is responsible for this. (Interesting side note: The Yankees and Orioles are now tied in the standings for the bronze medal in the AL East. That’s a thing, right?)

On one hand, screw Delta and every other airline in existence. On the other, holy shit, his name on an actual jet! Also, the model is a classic conversation starter.

It’s the equivalent of giving someone car keys for their birthday. “Why did you give me keys ohhhhhh damn there’s a car somewhere.”

Look, I’m all for local flavor, but can we please not give the most clichéd gift imaginable? This would be like the Mets presenting him with a miniature plastic replica of the Statue of Liberty and an “I Heart New York” T-shirt. We get it, Texas, you’re all rough-and-tumble riders of the plain. Stop shoving it down our throats. I bet Nolan Ryan and George W. Bush came up with this gift together.

For a paper-tier gift, this isn’t bad. The Rock and Roll Hall of Fame is in Cleveland, so it even makes sense from a local angle. And unlike the Orioles, they didn’t get all miserly by casting the record in bronze.

OHHH YOU JUST GOT ONE-UPPED, CLEVELAND.

First of all, huge kudos to the Giants for giving Rivera a gift even though they were the visiting team and didn’t play host to the Yankees this year. Pure class. Now, can someone please explain why Willie Mays signed the guitar? They know he was a baseball player, right? And that Mariano doesn’t even play guitar? But maybe I’m being too critical. I like the idea of sports legends signing items that have no relationship to sports. As a New York sports fan, I would pay up to $1,000 for Eli Manning to sign my copy of William Faulkner’s As I Lay Dying, or to have A-Rod’s signature on a Belle & Sebastian album cover. Anyway, a copper-tier donation plus a tacky painting plus an out-of-place signature may not look like much, but I’m giving the Giants an A for effort.

I’m going to ignore that the Red Sox couldn’t resist mocking Mariano in their video tribute, since apparently that’s just “good-natured fun” (I’m clenching my teeth in anger). The painting is silly, as paintings are, but I have to admit the bullpen rubber and the scoreboard placard and the no. 42 seat are pretty thoughtful gifts. Believe me, I didn’t want to put Boston in the top 10, but if this list doesn’t maintain its integrity, then this whole world is a waste of time.

5. Padres: Beach cruiser bikes for Rivera and his family

Presumably so he can reenact this scene from The Sound of Music, except on a beach.

Look at the low-budget Athletics coming up with the biggest non-Yankees donation of the bunch! Sure, they won that contest by just $42, but I’m glad someone finally used Mariano’s number as a justification for paying more, not less. This is the best example of Billy Beane’s Moneyball yet: maximum value, minimum expenditure. And as long as they’re not insulting Mariano’s masculinity with the white wine, I give Oakland very high marks.

Mariano is the son of a fisherman, and he worked on his dad’s boat for three years as a teenager. He still fishes, so he can actually use the gift, but it’s also a great symbol of where he came from and where he’s going in retirement. And while we don’t necessarily associate Los Angeles with fishing, it is on the water, so there’s some local significance as well. A great, thoughtful gesture by the Dodgers. IS THAT SO HARD, DAD?!

OK, some disclaimers. I’m a sucker for local history, mythology, and all things of that nature, and I’ll freely admit that this was probably not Mariano’s favorite gift. But the sculpture of the Inuit legend Kiviuq, done in Brazilian soapstone by a Toronto artist, shows the hero catching a giant fish after a long struggle. The connection to Rivera is purely metaphorical, about determination and struggle, and Kiviuq’s solitude in his kayak isn’t unlike Mariano standing by himself on the mound, charged with protecting a lead. To me, this is a nearly perfect gift, and I applaud the Blue Jays’ creativity, even if it’s a bit outside the norm. Also, they went for the gold membership in the donation category, just in case Mariano’s not into soapstone art.

The Minnesota Twins present Mariano Rivera with the "Chair of Broken Dreams" made out of bats he broke.  pic.twitter.com/xrvXWKGkp5

It’s a rocking chair made of broken bats, and it’s called the “Chair of Broken Dreams.” How fucking cool is that? It’s personal, it’s funny, and it’s useful. This is the best and most creative of all possible gifts, and in a weird way it’s pretty touching too. And they back it up with cold, hard cash; a gold-tier donation to Mariano’s foundation from another low-budget team. Excellent job all around, and we’ve just witnessed something truly rare: The Twins won!