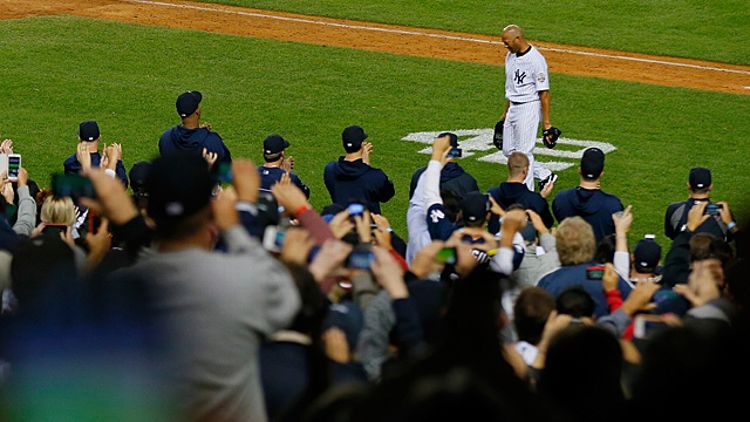 The emotion built up, in stages.

This was Mariano Rivera’s last home game at Yankee Stadium, and for most of it, the crowd was dead silent. At the start, the Bleacher Creatures performed their roll call ritual, chanting “MA-RI-A-NO!” to close it out. Then, silence. That can happen when Alex Cobb is throwing a one-hitter against you for seven innings, when your team’s been knocked out of the playoffs on the way to being swept by a ballclub with a payroll one-quarter the size of yours.

Throughout Thursday night’s Yankees-Rays contest, the scoreboard at Yankee Stadium showed various “Thanks, fans” messages. David Robertson’s head popped up. CC Sabathia’s. Curtis Granderson’s. On through the roster the thank-yous went, until Rivera’s face flashed onto the screen. This was the next burst of life, a moment more than two hours in, when the near-capacity crowd finally roared its approval.

It all began building to a crescendo after that. In the top of the eighth, Rivera got up and starting warming up in the bullpen.

The Rays, already in command, tacked on two more runs against Dellin Betances.

Joe Girardi strolled to the mound. Then, 48,000-plus stood and cheered their asses off. In the press box, where cheering is forbidden under any and all circumstances, another capacity crowd sat silent. No one cheered. But at least three-quarters of the writers and radio/TV people had the most instinctive, 2013 reaction possible: They pulled out their phones and started snapping pictures.

“Enter Sandman” began to play. The bullpen door opened. And Rivera jogged onto the field for the last Yankee Stadium appearance of his career.

He made quick work of the Rays, getting Delmon Young to fly out on the first pitch, then inducing a groundout right back to the mound by Sam Fuld. The Yankees mounted a rally in the bottom of the eighth, smacking two hits off the suddenly mortal Cobb, but Joel Peralta came in and set down three Yankees in a row, preserving the shutout.

You might have figured Rivera would’ve been done after facing those two batters — getting the Yankees out of trouble for what appeared to be the last time. But after a longer-than-usual pause, he popped out of the dugout to start the ninth. Jose Lobaton tapped back to the mound. Yunel Escobar then popped out to second. Only one batter left, and Rivera would’ve closed it out — not a win, granted, but the final out recorded by a Yankees pitcher at home this season.

Then something completely unexpected happened. Out of the dugout strolled two figures in Yankees hoodies. Neither of the two men walking out were Girardi. Instead, it was Derek Jeter and Andy Pettitte, the superstar nearing the end of the road, and the beloved-in–New York lefty about to reach it. Both had gigantic smiles on their faces as they approached the mound. Pettitte signaled for a righty to come in and replace Rivera. When they arrived, Rivera threw his arms around Pettitte, buried his face in his friend’s shoulder … and wept. These were the kind of tears you might shed once in a great while, in a private moment, with loved ones. Only this was happening in front of a packed stadium, with a few million more watching on live TV.

If you didn’t get goose bumps and a little dust in your eye at that moment, you were either a Red Sox fan who drove four hours the wrong way on I-95, or possibly dead.

It was still a bit of a weird atmosphere, though. Despite the night’s robust attendance and unforgettable Mo-ments late, the game had a funereal feel for most of the night.

Earlier in the day, ESPN’s Buster Olney reported that Robinson Cano, represented by Jay Z’s Roc Nation sports agency, was seeking a $305 million contract that would be the biggest in baseball history. There were rumors that Alex Rodriguez wouldn’t make the trip with the team to Houston for the final series of the year, and, with his suspension looming, might not play again for a long time, his career possibly hanging in the balance. Then there was Pettitte. He was the forgotten man in the Rivera Farewell Jamboree, a pitcher who’d produced many seminal moments in his own 18-year career, about to call it quits himself. He got a quick (albeit heartfelt) cap tip before the bottom of the ninth, in the middle of Mo Mania.

But this was always going to be Rivera’s night. In the days leading up to his final game at Yankee Stadium, the tributes came pouring in. Most of them were gushing in their praise, honoring a quiet and humble man who had a long list of charitable ventures, who also happened to be The Greatest Closer of All Time™ and maybe even Jeter’s equal, in terms of great modern Yankees. There were the occasional contrarian views, which argued that Rivera was great at what he did, but that the modern closer role fundamentally limits a pitcher’s value, since retiring three batters before giving up one, two, or three runs isn’t particularly difficult or impactful.

Though writing this will immediately ban this column from the #HotSportsTakes Hall of Fame, the truth pretty clearly lies somewhere in between. Rivera is indeed the greatest closer of all time. His career still doesn’t stack up to Jeter’s, and you can even make a case for contemporaries like Jorge Posada being more valuable to the Yankees’ cause. But even if the closer role is overrated, Rivera’s career was phenomenal. He created a 19-year torture chamber for batters, who slumped back to the dugout with broken bats and broken hearts.

Rivera’s main weapon — more or less his only weapon — was his devastating cutter. The fact that Mo basically threw only that one pitch for most of his career seems like an unnecessary form of self-punishment, like knowing you’ve mastered a video game and then compensating by cranking up the difficulty to max level and playing with one hand, while annihilating a plate of ghost peppers.

Drew Sheppard, a writer for FanGraphs who specializes in producing really cool GIFs, illustrated the nastiness of Rivera’s cutter in a piece earlier this year. The pitch is especially evil for left-handed hitters, boring in on their hands and inducing countless weak ground balls, and in many cases, splintered lumber.

If Rivera’s career had ended 10 years ago, he’d still go down as one of the greatest relievers ever. Instead, he’s retiring at age 43, striking out fewer batters than he did at his peak and not throwing as hard as he did even two years ago.

Rivera has made up for his dipping velocity by leaning on his immense natural talent and a keen understanding of the game. Check out the progression of his cutter heat maps against left-handed and right-handed hitters.

That’s a typical pattern for a successful cutter thrower, doing major damage by coming in on lefties’ hands, then confounding righties with almost a screwball-type action, causing them to wave at pitches that break toward the outside edge, then off the plate.

… and here we see the pattern starting to shift. Rivera’s still attacking right-handed hitters the same way. But he’s also starting to favor the outside corner against lefties more frequently.

… and here we see the culmination of that progression. Without the ability to hump up to 95 mph anymore, Rivera started relying more on deception, targeting the outside edge about as frequently as he does the inside corner against left-handed hitters.

We now pause for these obscene numbers from ESPN Stats & Info:

• Granting that Rivera’s had gobs of postseason opportunities by dint of playing for many exceptional Yankees teams, he’s made the most of his playoff opportunities, to say the least.

And here we come to the fundamental question: Even with all those saves, all that run prevention, and all those postseason heroics, how much value can a ninth-inning specialist (even one who’s had more four- and five-out saves than any of his peers) have?

But there is a statistic that thrusts Rivera’s value into focus, one that’s not anywhere near as old-fashioned or team-dependent as saves. Win Probability Added is a statistic that measures how players affect their teams’ chances to win a game on a per-play basis. WPA is a counting statistic and events can both add and subtract to the total. According to FanGraphs, since his debut in 1995, no pitcher (reliever or starter) has accumulated more WPA than Rivera.

… And that doesn’t include Rivera’s extensive October accomplishments.

With two outs in the bottom of the ninth, Cano came up to bat. While the throng had cheered Rivera and Pettitte earlier, an uneasy murmur greeted the All-Star second baseman. Two innings earlier, a smattering of fans in the upper deck began chanting, “Na na na na, na na na na, hey-hey-hey, good-bye!” As fate would have it, Cano was the last batter of the game, lining out to left to seal a 4-0 Rays victory. Given Cano’s likely price tag, and the Yankees’ strong incentive to get under $189 million in payroll next year, the next time he plays a meaningful game may very well be for the Dodgers.

After that final out, the Yankees players gathered their gear and prepared to walk out of the big ballpark for the final time this season. Rivera sat alone in the dugout, staring out onto the field. Cameras picked up the image, and the crowd again cheered at the top of its lungs.

Rivera stood up, walked slowly to the mound. He toed the rubber, then scooped up a handful of dirt. Put his head down, waved to the crowd, and walked off for the final time.

The line that’s been uttered more than once in the final days of Rivera’s career is that we’ll never see another quite like him. Maybe that’s true, maybe it isn’t. Baseball has a way of regenerating itself. Pedro Martinez fades away, Clayton Kershaw fills the void. Rickey Henderson and Barry Bonds flash in and out of our lives, and Mike Trout emerges, with elements of both, and also a style all his own.

I’d like to think Rivera’s legacy is simpler and more elemental than that. That somewhere, in California, Venezuela, or maybe Panama, there’s a skinny, long-limbed kid firing a cutter that breaks so sharply inside, you think it’s possessed by demons. The helpless batter takes a weak hack … and his bat’s blown to smithereens.