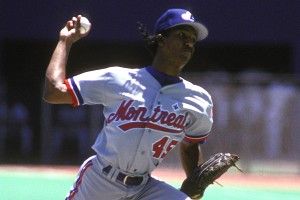 Major League Baseball, which has hoarded its old archives and clips like Scrooge Freaking McDuck, suddenly released a treasure trove of amazing old highlights. You can find the main archive here.

Jheri-curled, young Pedro Martinez hitting Reggie Sanders with a pitch, causing Sanders to charge the mound. In related news, Pedro was working on a perfect game at the time and clearly had zero intention of hitting anybody. Hate you, Reggie Sanders.

… Tim Raines hitting a game-winning, grand-slam home run at Shea, thus completing an absolutely insane performance in which he homered, tripled, singled twice, walked, stole a base, scored three runs, and knocked in four … after sitting out the first month of the season following collusion by the Expos and every other team. Oh, and Vin Scully was on the mic. The best.

… Manny Ramirez blasting a shot into the fifth deck at SkyDome:

… and a zillion more classics.

Seriously, just quit your job and leave your spouse now, save yourself the trouble later.