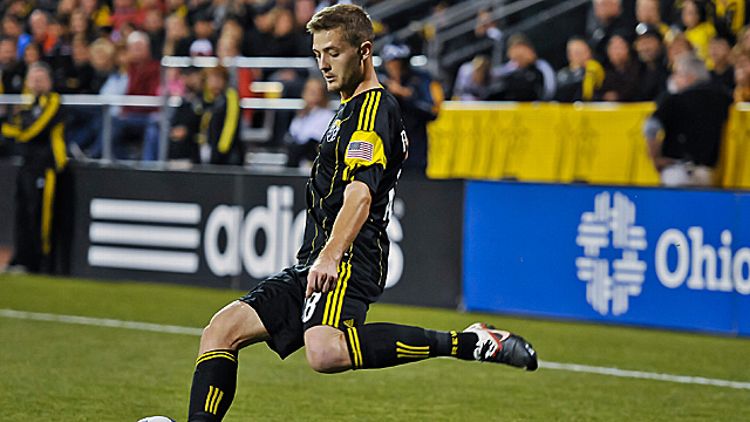 Last week’s news that Robbie Rogers had come out, while also “stepping away” from soccer, was both encouraging and discouraging for the context and reaction it received. Encouraging, in that Rogers’s announcement was met with overwhelming support, and that this was a young athlete in the prime of his career making the decision to come out. The discouraging aspect was that the coming-out was allied to the “stepping away” — with many of those supportive of Rogers’s decision sad that he didn’t see a way forward playing the game.

For his part Rogers doesn’t owe anyone anything, and as a young man who’d made his way in the modest financial climate of MLS, he’s hardly alone in having to think about life beyond the game sooner than other professional athletes. So it’s possibly a little more complex than a homophobic culture forcing him out of the game despite its lucrative lure — though god knows, when thinking about comparably paid careers in the wake of announcing one’s sexuality, it’s understandable to choose one where that decision was not considered fair game for on-field and off-field trash-talking.

Where it is a shame is that MLS, with its single-entity corporate culture and accompanying disciplinary code, and indeed relatively enlightened executive viewpoint (it’s hard to see Sepp Blatter tweeting out the equivalent of commissioner Don Garber’s encouraging comments after Rogers’s announcement), might have made an ideal league for Rogers’s presence as a player to move the conversation along and encourage others to live authentic lives.

MLS has instituted a zero tolerance policy for homophobia, with players Colin Clark and Marc Burch both receiving bans for comments caught by field microphones during games last year. In Burch’s case he missed the remainder of the Sounders’ playoff campaign, yet nobody at his club argued against the severity of the ban. Clark apparently treated his moment of shame with due seriousness, and seemed genuinely contrite over time — reaching out to the advocacy blog Gay4soccer (tagline: “Because soccer isn’t gay, but once in awhile it kinda is.”) and later to Rogers, in the wake of last week’s announcement.

For his part, Burch led off a video released by the Seattle Sounders in which players and Rogers’s former coach Sigi Schmid issued direct messages of encouragement to the player. The video segues into the MLS PSA for their “Don’t Cross the Line” campaign (No bullying, no racism, no sexism, no homophobia).

MLS isn’t always sure-footed in leading the way on social issues — there’s a cultural tension between the inclusive version of the sport taught to those who grew up playing the game here, and the uglier aspects of the global game, particularly the more unreconstructed examples of terrace culture, which sometimes seems to hold a lure as a mark of authenticity for certain American fans. MLS alternates between encouraging and policing fan culture in a manner that can appear prissy, if not downright hypocritical at times. But the lead offered by Rogers is the type of thing they actually do well at, since it lends itself to top-down mission statements of positivity and inclusivity. If those messages play well with a demographic that skews younger than other sports and is also the demographic more inclined to have progressive views on these issues, well, they might argue, so what? They’re no less sincere for that.

Heartwarming as some of the responses have been though, the fact remains that a genuinely integrated environment is built over time and not without dissent, sometimes from those who find themselves included on someone else’s terms. And that’s where the league’s commitment will ultimately be tested. At a policy and PR level, MLS has a fast reaction time — occasionally to a fault, more often to its credit. “Nimble” is the word the league favors, and at its best it’s a mindset that allows them to try new developments without fear, or hidebound by tradition. The flip side of that is a certain glibness that doesn’t always sit with the painstaking work of truly changing attitudes (which is ironic given the league’s cautious push into America behind a slow-growth business model).

That said, the MLS version of events may be being spun toward the feel-good side, but at least the subject is airing, thanks to Rogers’s bravery. I wish him well with whatever’s next for him. And hopefully his step out and away (and that of David Testo before him) helps others to step forward and stay.