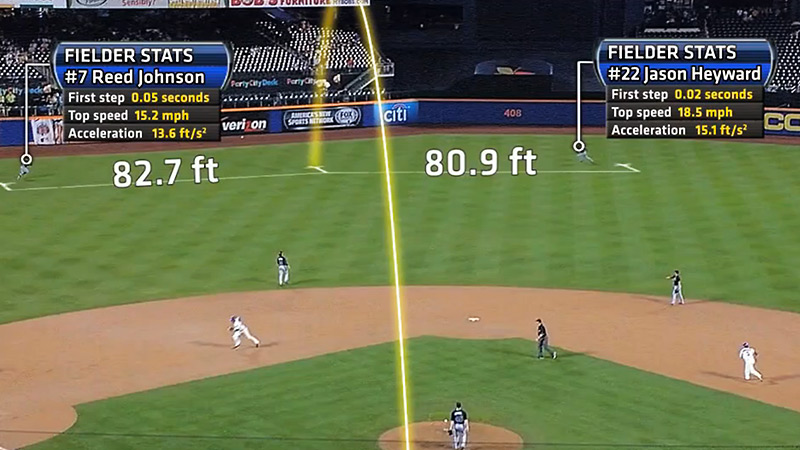 Major League Baseball Advanced Media unveiled its new play-tracking system at last weekend’s MIT Sloan Sports Analytics Conference. The technology will allow fans, analysts, and all 30 teams to gain precise information that was previously out of reach, including the jump an outfielder gets on a fly ball, the route he takes to that ball, and the speed with which he runs it down, as well as baserunner speed, the trajectory of the ball off a bat, and much more. In short, it seeks to measure everything that happens on the field, and it’s the coolest/nerdiest advancement the baseball world has seen in a long, long time.

SI.com’s Jay Jaffe and Baseball Prospectus chief and Grantland contributor Ben Lindbergh both wrote excellent, detailed breakdowns of the radar-and-camera hybrid technology that you should read tout de suite. To gain some more insight on the unnamed system, I talked to MLBAM CEO Bob Bowman about this evolutionary version of FIELDf/x and HITf/x, what the new technology could mean for the game, and how MLBAM will work through the challenges that are bound to pop up as the system launches this year in three parks, then expands to all 30 stadiums in 2015.

How long had MLBAM been working on this?

We’ve been working with Sportvision for some time, on PITCHf/x and FIELDf/x. This system is more evolved, and easier to track. There are two steps here. First, you’re capturing all these pieces of data at 32 frames per second. That’s easy. Then, you’re capturing video. That’s easy. Like any cake you bake, it’s how you put the ingredients together, combining data and video capture. Then you have to overlay it all accurately, clearly, and quickly so people understand it. We’re committed to launching this year. We want to have a few eggs lying around, and we’ve got FIELDf/x already in a number of parks. But we think what we saw [at the Sloan conference] is the best way to get that combination of accuracy, clarity, and speed.

This seems like something that’s great for teams doing their own analysis and great for die-hard baseball nerds, but what does it offer the typical baseball fan who follows his own team and just likes to watch the game with a beer in hand?

Click here for all of our interviews with fascinating people from the worlds of sports and pop culture.
If you look at Web Gems, they’re all about defense — people like long home runs, but usually the bat is not what gets people to oooh and aaah. It’s leather and speed. I grew up a fan in Milwaukee, loved watching guys banging balls, Stormin’ Gorman, all of that. But it was leather and speed that made it all exciting.

You look at the Jason Heyward play, to be 97 percent efficient on his route, running at 18 mph, getting a jump in 2/100th of a second … that’s just amazing. Baseball is a game of seconds, of fractions of seconds. What this technology does is make clear just how good these guys are on defense.

At the conference, your CTO [Joe Inzerillo] said the system would be available “for baseball operations and some fan use for 2014.” How much access are we talking about? When exactly? And what will we get in 2015?

First and foremost, we want accuracy. We’ve talked to baseball ops people, letting them know that the path we’re going down is to make it available to everybody, and we want that to be well understood by every team. It won’t be as granular as stats folks want initially, more like looking at the finished product rather than ingredients — though ops people will see that granular data right away. Plus with only three parks this year, we wanted to make sure there was a proper sharing arrangement between all the teams, so even if your team doesn’t play in a particular park this year, that team still has access to the data coming out of it. Maintaining on-field competitiveness and fairness was important. We want to get it out in somewhat varnished form to the masses. But the goal is to also get it out in unvarnished form to people who want it eventually. That provides value, too, so that [analysts] can think of things that we haven’t thought of. Then there’s broadcast TV; we think this will be very interesting to fans, to be able to see the path a fielder takes, the line to the ball.

Getting more specific, we expect to have unvarnished data on March 30 to send to baseball ops folks. For regular fans more like me who just want to see it and start debates with their neighbors, you’ll start to see those in April of this year. It seems odd to have a whole season for a trial, but that’s what we’re doing. The goal is to put the product out this year, then get to all 30 parks, then release the data in unvarnished form in 2015.

One thing that occurred to me is that it could help teams differentiate between positioning and range, then make decisions on players in trades or free agency accordingly. So someone like Cal Ripken, who built a great reputation on positioning, might see his defense hold up better than a player who relies on reflexes and quickness that might start to fade over time. What do you think the player analysis implications will be?

In the end, it’s about making the play. There are lots of ways to make the play, but it starts with where you start the play. If Ripken were on this call, [he’d] know where the pitch was going to be thrown, where it’s going to be hit, all of that. You know that a player like that has more of these things in their heads than what we’re capturing; they have an innate sense for it. Left-handed hitter at bat, full count, one out, guy on third — they know what the hitter’s going to do with this pitch. We’re trying to show their starting point, that 93 percent of the time they start on this spot on the field, that if you go to the game, especially if you’re watching an outfielder, you can see the worn spot on the outfield grass. Then we can measure standard deviations of that, left and right, back and forth from there. From there, we can measure how much they move, how they run to the ball on a play. Speed will matter, especially in the outfield. But what it comes down to is that if you can position yourself well, your jump can be a little different, and you can still get to balls. This could really change the way teams position fielders, and how they approach defense in general.

What about for hitting? Are there aspects of batted-ball results that we don’t, and can’t, know yet?

You saw us being able to measure the speed of a batted ball. What we showed is the ball coming off the bat at 97 mph. We also have the trajectory, all of that. What we didn’t show is, did he catch 80 percent of the ball? Forty-five percent of the ball? That will obviously affect the speed of how hard it’s hit and how far it goes from there. That’s something to come, that’s not in this version, that’s really getting granular on swing results. How instructive that is for players? We’ll see. I think they have a machine that does this called their brain — and their eyes — that does a lot of this already. What this will do ultimately is show the rest of us what players know instinctively. Like in those PGA commercials, “These guys are good.”

The big positive here is that these are not calculated stats like ERA or [batting] average. This is showcasing what fans love to see. It’s so we can really appreciate how unbelievable a play was.

The f/x systems run by Sportvision use only cameras. Walk us through the decision to go to a combination of cameras and radar, and why that offers an advantage.

The binocular view of the cameras, the theory is that it replicates the best binocular vision in the world, which is the human eye. That helps us distinguish between two bodies on the field, to see pretty easily who’s who, to do the best job with depth perception. What the radar system run by TrackMan does is measure the data, like the speed and the route. We’re combining the two, to overlay what the camera sees with the radar that generates the data, along with standard video, all combined. This system has been used successfully in soccer. Baseball is different, but we think it can work here too.

There seem to be a couple of early limitations here. One is that the system is measuring center of mass, not the player’s extremities. How might that be a problem?

If you think about it, that’s the reason the video is there. If you measure jump, for instance, you wouldn’t want to measure the hand or whatever, you want the center of mass. With something like measuring a runner’s lead off first, then you’re trying to look at the foot rather than the center of mass. And if there’s a headfirst slide and the runner reaches with his hands, the center of mass won’t tell you how far he is from the base. What the cameras can see is if he’s out and why he is out.

The system is also supposed to produce seven terabytes of data per game, which is unmanageable if you don’t have incredible computing power. Will that number become more manageable over time?

It’s an eye-opening number, but it makes sense if you think about it. You’re catching 32 frames per second, times radar, times every play, every movement, all of it on camera and video, so … yeah. But there are only going to be so many plays per game that you might actually be interested in. A lot of those data won’t be terribly useful. A standard single won’t be as interesting as looking closely at the play made by the center fielder who catches a ball at his shoetops.

What else will we see come out of this new system?

We’ve been in the tech business for 13, 14 years. Job 1 is to get what’s in front of us out clearly, quickly, and accurately. That’s a big task, and it’s not going to happen overnight. What’s the 2.0 version of this? We don’t necessarily have a clear view of what 2.0 looks like. We’ve come to believe that while the unexpected can come back to haunt you, the unplanned isn’t bad. We’ll put stuff out, see what people like, then figure out what we want 2.0 to look like.

MLBAM has been successful as a for-profit business. How do you plan to monetize the new system?

Well, there’s no real sponsor for PITCHf/x online, it’s just there. On the other hand, 97 percent of TV broadcasts are using PITCHf/x in some fashion, and that’s sponsored — though that revenue goes to teams; it doesn’t come directly to us. We’re capitalists at MLB.com, but frankly we haven’t given that much thought here. It’d be nice to get some return, but that’s not what’s driving us right now. This is something we think fans want, and we can deliver it, so that’s what we’re going to do.