Why MLB Can’t Stop the Dodgers From Spending Truckloads of Money on International Free Agents: A Guide 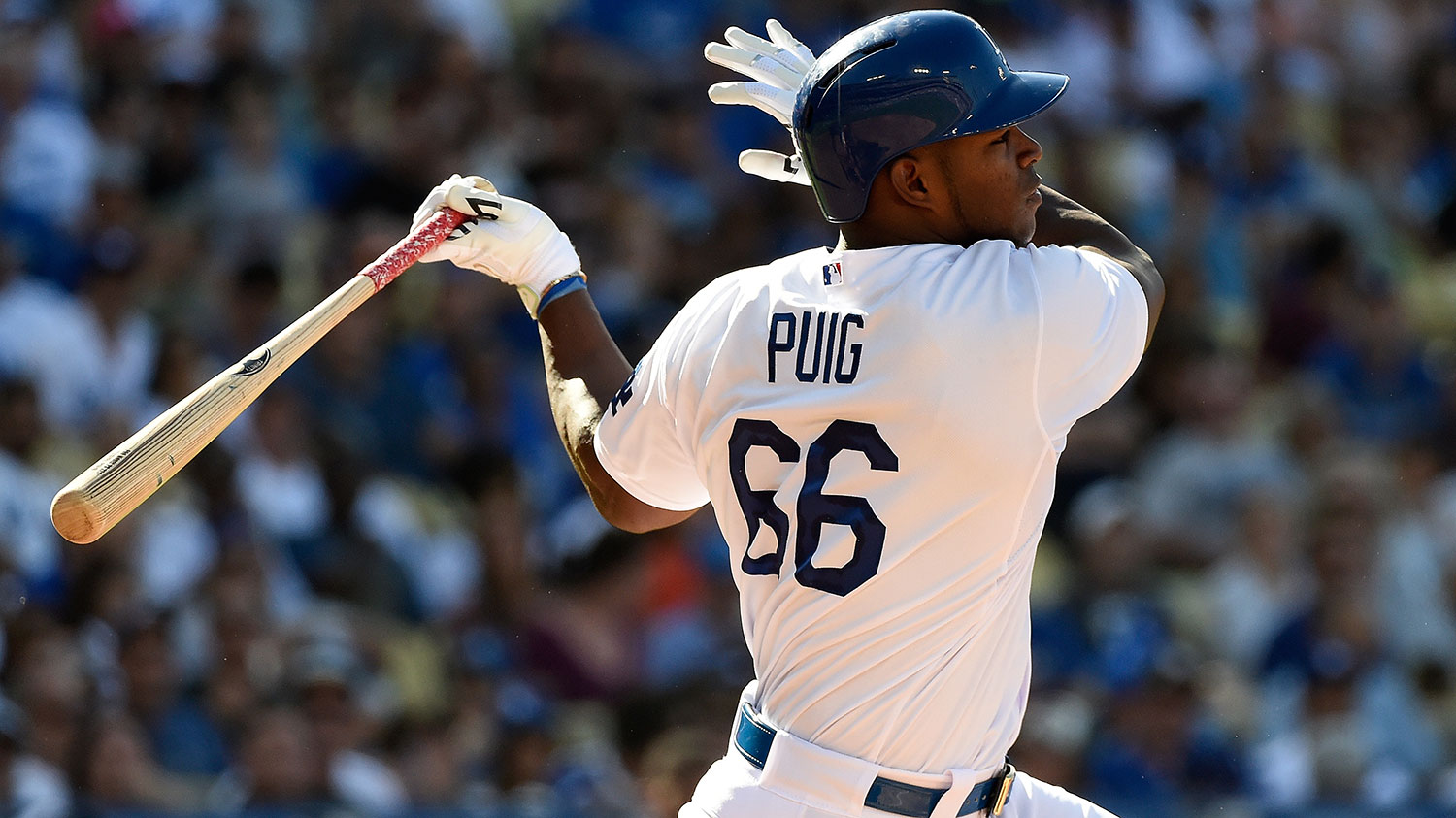 Last week, the Dodgers spent more than 20 times their allotted international budget. They coughed up more than $22 million on just five prospects, including $16 million on Cuban right-hander Yadier Alvarez, and were penalized a further $20 million for exceeding spending limits. In other words, the international signing system is totally broken.

To understand why L.A. shattered the bank for this bumper crop — and why the Dodgers will probably be one of the last teams to pull off this kind of bonanza — we’ll need to go back to the beginning of international free agency: How did we get here? Why did certain teams change their spending behavior so radically that it paved the way for buying sprees that have reignited debate over competitive imbalance in baseball? And what figures to change going forward? Let’s take a look.

How did the new international budgeting system start?

For years, Major League Baseball operated under a system in which teams’ scouting directors recommended their own budgets for international spending. Eventually, though, owners decided it was time for a change. This was no surprise given MLB’s past: From apocalyptic battles for salary caps to treating many minor leaguers like little more than chattel, team owners have a long history of reaching for every dollar in players’ pockets. Out of that desire was born the idea to implement (supposedly) harder caps on international spending. Specifically, the goal was to trim the range of team spending from about $2 million to $6 million down to something closer to $2 million to $4 million. Since the players’ union only looks after its own members (i.e., major league players), the owners knew they could ram this change through during collective bargaining agreement negotiations without any interference.

The current CBA was enacted in November 2011. The first two years of the new international system (2012 and 2013) included a soft cap of $2.9 million. After that, teams would be given a certain amount of money based on their record in the previous year. There are penalties for going over these international spending limits:

• Zero to 5 percent over: 75 percent tax for every dollar spent above a team’s prescribed limit.

• Five to 10 percent over: 75 percent tax, plus team will not be able to spend more than $500,000 on any given international player next year.

Outside of rare occasions, MLB did not anticipate teams going over those limits. The league was, of course, very wrong.

Earlier this decade, teams began making mountains of cash from both national and local TV deals. Even after raises in arbitration and free-agency compensation for major league players — in addition to stadium renovations, padding their own profit margins, and all the other ways teams could spend this new money — some especially wealthy and/or aggressive teams still found themselves with money burning a hole in their pockets. That left amateur spending as a logical outlet for that new revenue. Except, teams couldn’t just plow money into the amateur draft, because the penalties there were far stricter than the ones imposed on international spending, and teams had no interest in sacrificing high draft picks for the sake of landing any one individual player.

While all of this was happening, relations between Cuba and the United States were starting to soften and a new generation of young Cuban stars was about to burst onto the scene. When player after player — more advanced Cuban stars like Jose Abreu as well as younger players like Yasiel Puig and Jorge Soler — started blowing everyone away, teams became less reticent to spend money on a class of players once viewed as mysterious and unpredictable. They started seeing investments in young Cuban talent as the equivalent of getting an extra draft pick for nothing more than some money, which, of course, the richest teams now had in spades.

How have teams gamed the system?

Teams started realizing that going over the suggested limits wasn’t that big a deal if the right-caliber prospects came along, given all the new money they had at their disposal. Moreover, unlike during the amateur draft, where teams going over prescribed budget limits by a certain amount had to sacrifice actual talent in the form of forfeited draft picks, the international penalties were only about money and future signings. So, teams started spraying money everywhere. On the July 2 signing day last year, for instance, the Yankees didn’t just go after one top guy; they signed nine of MLB.com’s top 25 international prospects and annihilated their budget limit in the process.

This year, the Dodgers took it a step further. In the process of spending that $40 million–plus on signings and penalties, L.A. actually traded away some of its international budget space in exchange for several minor league players. This increased the penalties on their international spending, but if you’re prepared to go over your allotted cap by $20 million, a few hundred thousand here or there hardly matters. Because of the spending-cap penalty, they won’t be able to sign any big-time international prospects next year, but they don’t care. Rather than signing maybe one expensive player each year and staying within the rules, they realize it makes more sense to sign five expensive players in one year and then sit out the next. When money doesn’t matter, these are the kind of calculations you can make.

So why doesn’t every team act like the Dodgers, Yankees, and Red Sox, who splashed $31.5 million for Yoan Moncada, when it comes to international spending?

First, an elderly owner like the Tigers’ Mike Ilitch, who is desperately seeking a ring, is going to be a lot more interested in his major league roster than any teenage prospects who might not make the Show for another five or six years and might take up to a decade to become stars … if they ever pan out at all. Also, international prospects never invite the same kind of consensus that amateur-draft-eligible players do, since you’re often dealing with 16-year-olds in other countries, as opposed to significantly older players starring at, say, Vanderbilt. Therefore, some teams feel like they can still find quality teenage talent in, say, the Dominican Republic, without paying sky-high prices. Finally, some owners simply prefer to pocket money rather than spend it on high-risk commodities, even if the potential returns can sometimes be big, too.

When a team blows past its budget, where does all of that penalty money go?

When MLB first implemented these rules, the expectation was that we’d see no more than a few million go into the league’s kitty, since the penalties would discourage teams from going over their budgets. After this most recent July 2 period, the penalty fund since the new system was put in place has now exceeded $80 million — and might even be considerably higher. Since nobody planned for this, nobody knows what to do with all of that cash. For now, it just belongs to Major League Baseball, and it’s more or less just sitting there.

What other problems exist with the current system?

One of the biggest is that the most aggressive teams now realize this is an all-out arms race, so you’ve got teams pursuing 14-year-olds, with unscrupulous agents and all kinds of rules violations coming into play. According to ESPN’s Keith Law, one team secured a handshake agreement with Kevin Maitan — a Venezuelan shortstop prospect who’s already been compared to Miguel Cabrera — long before it was allowed to do so by MLB’s international free agency rules. In an already sketchy international market in which teams stomp on the rules all the time, that kind of jump-the-gun move doesn’t sit well with the league.

MLB will push toward implementing a draft of international players, presumably starting in 2017 — after the current CBA expires in late 2016. Despite all the spending we’ve seen, owners generally don’t like spiraling costs and therefore don’t like being forced into arms races over Dominican teenagers. The stated benefit of an international draft will be that lousy teams stand to gain (as they do in the amateur draft). An international draft — coupled with the kind of stiff penalties that exist in the amateur draft — would likely curb the ability of rich teams like the Dodgers and Yankees to run roughshod over their poorer rivals, thus helping competitive balance. But the main reason for the draft would be to put more money back into teams’ pockets.

Still, even if an international draft is put in place, it would carry its own set of complications. Teams like the Marlins and Orioles have been notoriously unwilling to spend on international signings. If one of them ends up with the no. 1 overall pick, would that team pay the multiple millions it would take to convince the top player to sign? Or would it draft a far lesser player on purpose, thus violating the spirit of the draft and creating all kinds of weirdness as the top talents slide down the draft board? Making picks tradable could solve that problem, but MLB isn’t quite so forward-thinking when it comes to finding innovative solutions for problems that haven’t yet arose.

There’s also plenty of doubt as to whether the draft can really be truly international. If Cuba’s involved, do you have to pay off government officials to get them to comply? And if so, how much? Will the combative Venezuelan government play ball? Will Mexican teams, which currently receive 75 percent of a player’s signing bonus, push back against a new system? Right now, MLB teams can’t go after Japanese players, and they can only go after certain Korean players once those players are posted by their teams. If multiple nations don’t participate, that defeats much of the purpose of the draft, and much of the international spending spree would continue. On top of all that, there’s the issue of how to handle older Jose Abreu types: Will they still be true free agents eligible to sign with any team once they hit a certain age? Or will they, too, have to enter MLB through the draft?

As things stand, the future of the international player market is littered with questions. For now, we’ll wait to see if Alvarez becomes a star for the rules-smashing Dodgers, if Moncada becomes the next Red Sox franchise player, and if Maitan justifies the Miggy hype. We’ll soon find out if all of that rampant spending and against-the-rules verbal agreements will push MLB toward that international draft, but until then, chaos will continue to reign.

Thanks to Kiley McDaniel for his help with this article.

The Tainted History of the 'Dynamo' Team Name