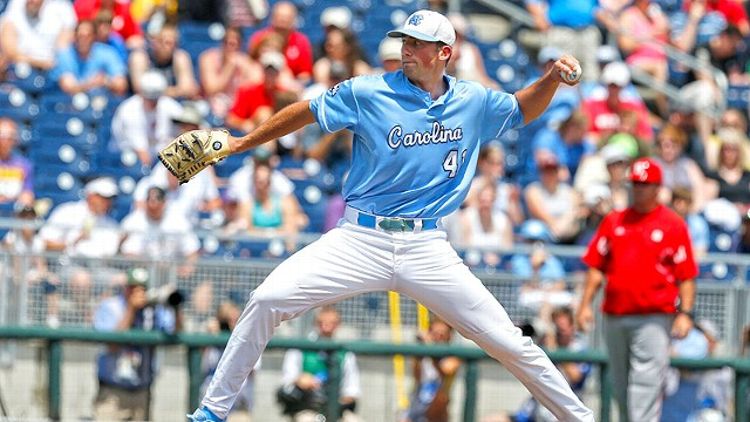 We haven’t completely solved baseball, but we’ve made great strides in the past 100 years. Standards for training, conditioning, and instruction are at an all-time high; the equipment is better and the medical treatment is more advanced; scouts scour a wider talent pool than ever, bringing in players from Brazil, Italy, and Germany in addition to Latin America and Asia.

But injuries persist, particularly injuries to young starting pitchers. While there’s a general consensus that overuse — pitching too often, for too long, under too much stress — wears out developing arms, there’s really no way to identify the breaking point until it has passed.

MLB clubs can shelter their teenage starters, but they don’t have that luxury with pitchers from the college ranks, who are subject to use and abuse by coaching staffs motivated to win at all costs. That’s a problem, because elite college pitchers are among baseball’s most sought-after commodities: College pitchers went no. 1 and no. 3 in this year’s amateur draft. In fact, college pitchers have gone no. 1 overall in five of the past seven drafts, and NC State lefty Carlos Rodon looks poised to continue the trend (insofar as it’s possible to predict these things nine months out).

A recent study casts doubt on the notion that college pitchers face a greater injury risk, however. Last week, Baseball Prospectus’s Dustin Palmateer put together some actual research on the topic, finding, somewhat surprisingly, that high pitch counts in college don’t necessarily lead to injuries in the pros. But in creating a gap between reality and perception, the study provides college coaches with an opportunity to gain a recruiting edge by playing off of pitchers’ ongoing concerns about overuse.

Palmateer’s research is based on Pitcher Abuse Points, a metric intended to measure dangerously high pitch counts for starters that was developed some years ago by Rany Jazayerli, whose name should be familiar to you Grantland baseball folks. Palmateer found that higher PAP per start doesn’t actually bear a statistically significant relationship to injuries early in a pitcher’s professional career.

It’s a good study, and certainly one worth reading, but it’s not the final word on college pitcher usage. It also shouldn’t give college coaches carte blanche to treat their aces like Mickey Lolich. If anything, the rigidity of PAP, which treats 100 pitches as a cutoff point, is emblematic of the problem with trying to legislate pitcher overuse out of the game.

The challenge with using Little League–style pitch counts in college is twofold. First, rigid pitch counts value long-term health over winning the game. Coaches should certainly keep their players’ futures in mind, but college baseball is high-level athletic competition, and each game’s outcome is important in its own right. Second, what we learned in kindergarten is actually true when it comes to pitchers: Everyone is special in his own way. The two most-abused college pitchers in Palmateer’s data set were Justin Verlander and Tim Lincecum, and they both wound up having pretty decent pro careers, didn’t they? (While at Washington, Lincecum routinely started on Friday and closed on Sunday. Then again, they don’t call Lincecum “The Freak” because of his striking physical resemblance to Jevon Kearse.)

No one approach is guaranteed to keep every pitcher healthy. What worked for Lincecum might not work for Karsten Whitson, a former no. 9 overall pick by San Diego who hurt his shoulder at the University of Florida. Pitchers with over-the-top deliveries are different from submariners or junkballers with low-stress motions; pro prospects are different from the myriad players who will go pro in something other than sports.

Palmateer’s findings don’t discount the fact that college pitchers with pro prospects can still suffer the effects of overuse. In 2004, three Rice University pitchers were drafted in the first eight picks. All three — Philip Humber, Jeff Niemann, and Wade Townsend — suffered shoulder injuries shortly after turning pro. Some of college baseball’s most celebrated coaches, including Texas’s Augie Garrido, South Carolina’s Ray Tanner, and North Carolina’s Mike Fox, have famously treated their pitchers as disposable. In one example, Palmateer traces a line between an outing at Texas and the end of Austin Wood’s effective career. Tanner went to three consecutive College World Series finals (and two titles) from 2010 to 2012, and in doing so rode closer Matt Price so hard that it’s a wonder Price’s arm didn’t fall out of its socket. And in this year’s NCAA tournament, Fox pitched Kent Emanuel so often and for so long that the UNC coach’s treatment of his ace merited mention in the New York Times. (Fox also coached injured Mets ace Matt Harvey when Harvey was at Chapel Hill, though it’s not fair to draw a straight line from coaches who tend to overuse pitchers to a UCL tear years later.)

College coaches are paid to win. By the time Emanuel had thrown 238 pitches over eight days this spring, it was well known that he’d be off to the Houston Astros as soon as the Tar Heels were eliminated. So if he needed Tommy John surgery or even labrum surgery down the line, North Carolina wouldn’t lose any games as a result.

Short of imposing mandatory rest periods or pitch counts, the only way to prevent college coaches from abusing their top arms is to give them an incentive to which they’ll surely respond: use pitcher usage patterns as a recruiting tool.

Touting a professional future over collegiate success is a common recruiting tactic in college basketball, but there’s room for it in college baseball as well. For instance, Tyler Beede turned down first-round money from the Blue Jays to play for Vanderbilt. Given the millions of dollars he risked with that decision, avoiding injury is now paramount. If Beede were facing this same choice today, he might want to know that Rodon threw 120 pitches or more seven times in 2013 and Emanuel reached that mark four times. In contrast, the entire Vanderbilt staff (including Beede) hit that mark once in all of 2013.

Again, as Palmateer illustrated, pitch counts aren’t the ultimate injury predictor they’re often assumed to be, but overuse still poses risk. Any college coach worth his fungo bat would be wise to harp on that point the next time he tries to recruit a potential no. 1 overall pitcher. “I’ll take care of you, and the other guys won’t” would be a powerful point of differentiation.

Barring a rule change, addressing overuse head-on is the best way for college coaches to simultaneously appeal to players and keep their top arms fresh. Since we’re no closer to solving baseball’s injury woes, a pitcher’s best hope is to look out for his best interests, and coaches have an opportunity to capitalize on that reality.