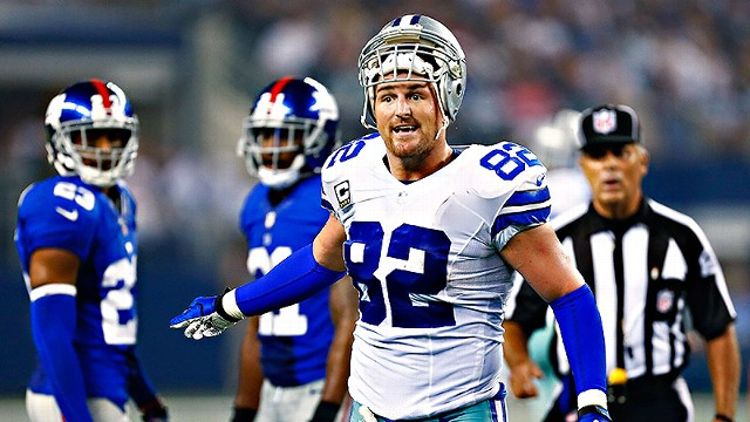 Last week Brian Urlacher, while making an appearance on Fox Sports 1, said that his Bears teams would often fake injuries to slow down opposing offenses. “We had a guy who was the designated dive guy,” he said. “It wasn’t coached, but it was part of our game plan.”

As the Chicago Sun-Times reports, “Urlacher said a Bears coach would simulate a swimmers’ diving motion with his arms from the sideline and the player ‘would get hurt.'” All of this is excellent, but the image of some Bears assistant swimming air laps makes it even better.

It’s like the opposite of Bountygate. Hear the REAL story of how the Bears coaches secretly encouraged players to fake hamstring injuries.

After Sunday night’s Giants-Cowboys game, a reporter asked Jerry Jones about the Giants faking injuries. “I thought us experts on football were the only ones who could see that,” Jones said. “I didn’t know everybody could. It was so obvious it was funny. It wasn’t humorous because we really wanted the advantage and knew we could get it if we could get the ball snapped.”

Funny, but not humorous. OK, cool. Glad we got that cleared up.

Anyway, what’s important here is that we are witnessing the dawn of a new era. The flopping era. The NFL flopping era. It will be great once everyone catches on to this trend. First, because watching anyone flop or fake injuries is always hilarious. And second, because there is no sport on earth less equipped to handle this in a mature, level-headed way.

If you thought people like Jeff Van Gundy had a hard time with flopping in the NBA, just wait until some poor nickel corner is flailing around on the ground to try to stop the Eagles’ no-huddle offense. Dan Dierdorf might jump out of the press box to grab him by the face mask and berate him personally.

Football is a MAN’S GAME, people. There’s no room in this sport for guys who take the easy way out. Are you injured or are you hurt? Or are you a COWARD who’s out there faking it?

For what it’s worth, I don’t know if the Giants were consistently faking injuries like a bunch of gutless cowards last night, but as Doug Farrar points out at Sports Illustrated, there was at least one sequence in the first half when Cullen Jenkins went down with a mysterious upper-body injury to stop the Cowboys. The picture of Jason Witten above is what happened next, when he ran to the refs to accuse Jenkins of being a big, fat liar. It wouldn’t be the first time the Giants have been accused of practicing the dark arts of Chris Bosh.

Which is a good reminder: Players have been accused of faking injuries for years. It’s probably happened as long as they’ve been playing football, the same way it’s been around forever in basketball.

The difference in 2013 is twofold. First of all, the rise of insane no-huddle offenses gives players more incentive than ever to pull up lame and stop the game. Second, there are now 8,000 HD cameras trained on an NFL field at all times, so if players are faking it, chances are we’re gonna see it. And there’s gotta be at least a few times when we’ll see teams be even more brazen than Cullen Jenkins. Sunday was really just the beginning.

We’re going to have announcer meltdowns, crazy Goodell fines and/or suspensions, thousands of the hottest takes imaginable, and just as fun, pretty much every week will bring some coach or owner openly calling out opponents for faking injuries.

No, it’s not. The flopping crisis in America’s game is going to be so much better.