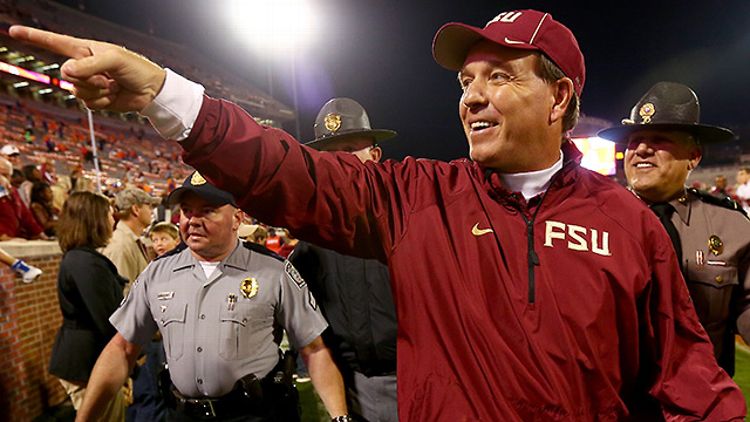 College football teams often hand out honorary awards during the doldrums of spring practice or the offseason conditioning program in order to recognize unsung scout teamers or those who consistently practice with great effort. It’s a way for the coaches and captains to recognize the hard work that takes place when the lights aren’t on.

Just before the 2013 season began, however, Florida State players issued a rather unusual award. After caucusing with some of his fellow seniors, Seminoles safety Lamarcus Joyner stood in front of the team and honored coach Jimbo Fisher as “the most improved person in the program.”

The rest of the country has since discovered the truth behind Joyner’s words. Fisher has rebuilt Florida State, leading the Seminoles to a dominant 13-0 campaign and BCS title game berth by quietly becoming one of the best coaches in college football.

And he did it by growing with his program.

Bryan Curtis’s post–Fiesta Bowl look at whether God can save the Baylor Bears.

Lindsay Schnell on the making, and remaking, of a Stanford star.

Fisher joined Florida State in 2007 as offensive coordinator and coach-in-waiting, a simultaneously tense and exalted position during Bobby Bowden’s waning days in Tallahassee. When Bowden retired three seasons later, Fisher took over and began overhauling the program in his own image. At his first staff meeting as head coach, Fisher laid out his recruiting philosophy. “We have to change ourselves,” he told his staff. FSU needed a different breed of player: faster, quicker, and, most of all, bigger. As Fisher put it: “We need grown-ass men.”

Fisher spent the first 10 years of his coaching career under Bowden’s son, Terry, first at Samford (where Fisher had been a standout quarterback) and then at Auburn, and Terry’s coaching philosophy still informs how Fisher runs his offense and teaches his quarterbacks. But Fisher’s approach to program building was explicitly modeled after the methodical and holistic “Process” of another former boss: Alabama coach Nick Saban, under whom Fisher worked at LSU.

Fisher focused on attracting top talent to Tallahassee, particularly on defense. “I may be the only offensive coach in America that spends all of my time recruiting on defense to make sure we are great on defense,” Fisher said at a coaching clinic last spring. “If the defense can keep you in the game, it makes it a lot easier. We totally believe in this.”

Despite earning an Orange Bowl berth last season, however, the Seminoles couldn’t put together a complete campaign. FSU’s 2012 team fielded a fantastic defense and an offense led by Manuel, yet the Noles inexplicably lost to a bad NC State team (which went on to fire its coach) and then to a talented but largely one-dimensional Florida team. After losing 11 players to the NFL draft and six assistant coaches to promotions or more high-profile jobs elsewhere, Florida State could have expected a rebuilding year in 2013.

Instead, these Seminoles have positioned themselves to make a case as the most dominant team of the BCS era.

While Fisher’s first staff included lots of energetic recruiters who successfully infused FSU with talent, it featured fewer seasoned teachers who could mold that talent into a championship team. Although he still calls the plays, the “less tense” Fisher to whom Joyner referred emerged in no small part thanks to FSU’s new assistants, particularly quarterback coach Randy Sanders. “In my opinion, Fisher has more respect for the input of some of his new assistants,” Bud Elliott, editor of the Florida State website Tomahawk Nation, told me recently. “He doesn’t feel like he has to do everything, and trusts Randy Sanders to talk to the offense while the defense is on the field, freeing up Jimbo to focus on being a head coach during games.”

The changes to Fisher’s defensive staff were even more significant. Forced to replace Stoops as well as a number of defensive starters, Fisher decided that the time had come to shift from Stoops’s sound but static 4-3 scheme to a multiple, aggressive, attacking 3-4 defense that could dictate terms back to the spread offenses sweeping across college football.

Fisher’s choice of defensive coordinator in December 2012 was nothing if not confident: He hired Jeremy Pruitt, a position coach at Alabama who was coaching high school football in that state as recently as 2006. (Inexplicably, Pruitt also does not know what asparagus is.) Fisher also hired another Alabama veteran, Sal Sunseri, to coach defensive ends, further signaling his desire to move FSU toward a Saban-esque multiple scheme that would bring blitzers from anywhere while using lots of tight man-to-man and “pattern match” coverage schemes. The boldness of Fisher’s choice was not lost on FSU fans, or on Pruitt himself.

“I want to thank [Fisher] for going out on a limb and hiring a guy who had only been a college assistant for three years,” Pruitt said during his Broyles Award speech in December 2013. “I was defensive backs coach at Alabama, where everybody in the country knows who the DB coach is — it’s Nick Saban. I’m not ashamed to say it. He is the DB coach. For Coach Fisher to go out on a limb and offer me a coordinator’s job means a lot.”

The gamble paid off: Pruitt rewarded Fisher’s trust by fielding the nation’s top scoring defense in 2013, a unit that gave up even fewer points than 2012’s record-setting group.

An Offense to Match

While Pruitt stabilized a defense that had lost its coordinator and several impact starters to the NFL, FSU’s offensive explosion is what truly transformed the Noles from an excellent but incomplete team into a championship contender. Although Fisher’s recruiting philosophy was to stockpile talent on defense, the offensive coach still kept some choice recruits for himself.

FSU currently has plenty of scoreboard changers on offense, including a trio of receivers who are locks to be drafted in Kelvin Benjamin, Kenny Shaw, and Rashad Greene; a trio of dynamic running backs in Devonta Freeman, Karlos Williams, and James Wilder Jr.; and an excellent tight end in Nick O’Leary. But quarterback Jameis Winston makes Florida State’s 50-points-per-game offense go. It’s staggering that a redshirt freshman quarterback could follow two consecutive first-round draft picks and play so well that FSU fans collectively exclaim, “Finally, we have a quarterback!”

Winston piled up yards and touchdowns on his way to the Heisman Trophy, and his 190.06 passer rating is good for the second best single-season rating of all time, just shy of the mark Russell Wilson set in 2011. And it’s not as though Winston has run some watered-down attack; Manuel said this fall that learning the Buffalo Bills’ system was actually “easier to learn than the offense [he] had at Florida State,” as it required fewer adjustments based on defensive coverages. Fisher’s system, by contrast, puts a heavy burden on the quarterback to alter his reads depending on the defense’s coverage or alignment.

Earlier in Fisher’s career, he asked both his receivers and the quarterback to adjust routes based on the defense, but in recent years he’s simplified things — for everyone but the quarterback. “There are so many schemes and we all want to be gurus in football and think we created something,” Fisher said at the clinic. “I am just as guilty as everyone else, I promise.” Over the last few seasons Fisher reduced the number of plays while building options for his quarterbacks within each play. “Against Clemson [in 2012] we ran the same pass play nine times,” said Fisher. “We completed all nine of the passes, to five different receivers. I did not need a new play.”

This only works if the quarterback makes the right reads; Winston had few issues in this department. “If we can teach the quarterback to read the defense it will work,” Fisher explained. “I let the quarterback make the decision.” While Fisher has coached some excellent college quarterbacks in his career — hey, even JaMarcus Russell looked great when he played for Fisher — no one has operated the coach’s attack as efficiently as Winston, which is why he won the Heisman, why Florida State is on pace to score more points than any team in college football history, and why the Noles are one win away from their third national championship.

To win that title, FSU has to go through Auburn, which fields a dynamic offense of its own. The Tigers may have needed a little magic to get to the BCS title game, but they will be the Noles’ biggest test to date. Auburn will run right at Florida State’s speedy but undersize linebackers, and the battle between Tigers tackle Greg Robinson and highly touted FSU defensive end Mario Edwards Jr. will be a fascinating matchup.

Regardless of the outcome, however, Fisher has rebuilt Florida State into the perennial power it was in Bowden’s heyday, hence the hefty contract extension announced this week. And while Fisher may have pulled the Seminoles out of mediocrity by employing Saban’s Process, he has brought the Noles to the verge of a championship by evolving that approach and crafting a process of his own. Joyner had it right: Fisher improved, and his team improved along with him.